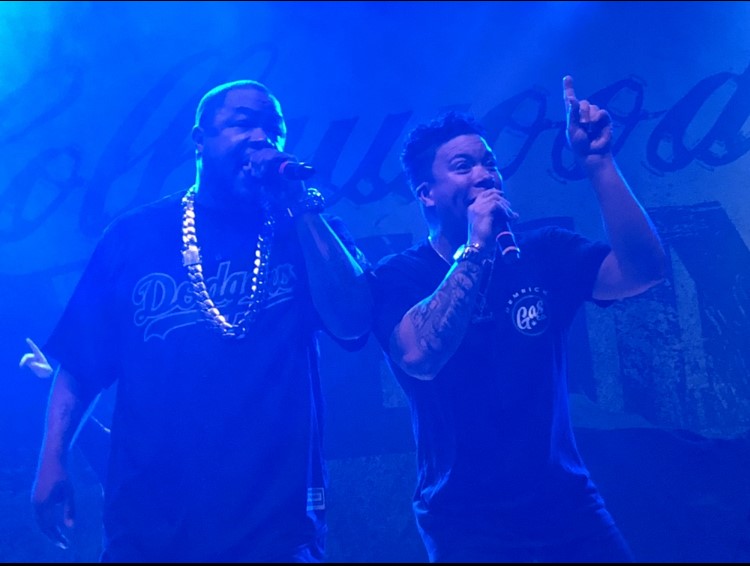 The House of Blues was entirely packed for Cypress Hill and Hollywood Undead’s “West Coast High” tour. The sold-out show began at around 7:30 and rapper Demrick was the first to perform.

Demrick brought a contagious energy right off the bat as he jumped around, rapping several of his tracks. He even gave a microphone to a member of the crowd to rap along with him. After a few songs, old-school rapper Xzibit brought some nostalgic sounds, including the classic rap songs he was featured on such as “What’s the Difference” by Dr. Dre. Towards the end of his performance, Demrick came back on stage and the two performed songs from their rap group called “The Serial Killers”. Their third member, B Real from Cypress Hill, was backstage during their performance, but the two killed in on their own as they ended their performance with their impressive flows and floor-shaking beats.

Hollywood Undead was up next as the instrumental for the rap/rock band’s song “Whatever it Takes” started. One by one, each member took to the stage as each of their verses started. It was a brilliant way to introduce each member to the audience, the fans cheering as each one set foot into view. One of the band’s most appealing attributes is their humorous personality and their constant interactions with the crowd. Along with making jokes between songs, the band does anything and everything to get fans involved in the show. One thing that has become tradition for their shows is to bring a fan on stage for their hip-hop party song “Comin’ In Hot”, this time bringing a young girl onto the stage. Another notable interaction was when rapper/vocalist Charlie Scene signed someone’s skateboard deck in the middle of the show. These little interactions give a fan a once-in-a-lifetime experience and hype the rest of the crowd up with a feeling of involvement.The band’s range of genres gave a thrilling variety to their performance. From loud metal songs such as “Undead” to their gentler-sounding pop inspired ones like “Bullet”, the band constantly delivers an exhilarating performance throughout each one. Every rap verse, metal scream, and guitar strum resonated throughout the crowd and the band had them rocking along to every second of it.

To close off the night, it was the main headliner’s turn to take the stage. The giant Hollywood Undead banner that was up at the beginning of the show dropped to reveal a banner of Cypress Hill’s 2018 album cover, Elephants on Acid, behind it. The Latino rap collective started with the song “Band of Gypsies”. While this caused the older fans of the crowd to go wild, the real hype began when the collective performed their famous song “Hand on the Pump”. B Real, one of the rappers of the group, fired up the crowd as he got them to sing the iconic chorus along with him. There was never a dull moment in Cypress Hill’s performance. In between songs, DJ Muggs would dazzle the crowd with his turntable skills. At one point, he and Eric Bobo, the percussionist of the group, had a stunning competition between the turntable and drums.

To end the show, Cypress Hill performed their 1993 hit “Insane in the Brain”, giving the crowd a wave of nostalgia of old school hip-hop. It seemed like the group went all out with the song. Throughout the group’s entire performance, there were no background vocals and rappers B Real and Sen Dog nailed every verse, giving the show a raw old-school rap experience. Each artist that night, old-school and new-school, gave Texas a West Coast experience to remember.