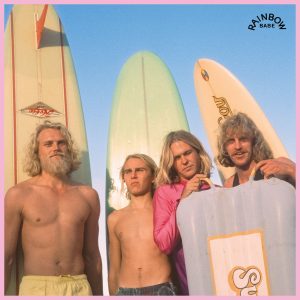 Although the indie scene has really come into the mainstream over the last decade, the groundwork of this sound was brought about in the 1980’s and 90’s. Daniel Johnston, one of the earlier pioneers of Bedroom and Lo-Fi recording styles, recently passed away, but his influential small and indie sound is ever more prevalent in today’s music. Today, an artist like Car Seat Headrest uses (or at least used to before singing to a label) a recording technique where he would record in small, quiet, enclosed spaces like closets and cars because he could not afford studio time.

Psychedelia is no stranger to this sound because how it has an inherent effect on the listeners emotions, giving it a more personal “one-on-one” feeling that indie music has. The rising popularity of bands like Animal Collective and Unknown Mortal Orchestra have been making indie psychedelic albums, but neither have seemed to combine these genres nearly as well as The Babe Rainbow has with their new album, Today. Even though the band has worked since their formation and first single, “Love Forever,” came out. Beyond this they created many more singles, an EP, and two albums that attempt to converge indie-psych with other genres such as folk and elements of jazz, but on Today, the band has assimilated indie-psych with the beloved and intermittently popular surf rock.

This genre combination is what stood out the most to me, especially because of several duller songs between “Us and the Rainbow” and “Beasty.” These songs are unvaried and use oddly congruent song structures that lead to similar runtimes that make this album akin to Weezer in all the worst ways possible. Another issue I have with this album is that the songs are structurally similar to another band on their label, King Gizzard and the Lizard Wizard. While this brings out some peculiar instrumentation and interesting aspects, the instrumentation starts to over shadow the lyrics and creativity of The Babe Rainbow. Much like King Gizz, several of the intermediate tracks seem to be built from the beat up which leads songs to seem like c-sides from Gizz’s more psychedelic work.

On the other hand, Today deserves praise for its standout tracks such as “Morning Song,” “Something New,” and “Many Moons of Love.” These songs showcase the better parts of the band, both lyrically and instrumentally while incorporating several genres for a unique sound. These songs mostly consist of the singles, so it the album was a slight disappointment when it came to its release. While I don’t believe that this is The Babe Rainbow’s greatest work, the album prides itself in pioneering a new sound and genre combination while keeping their mellow, easy listening vibe.