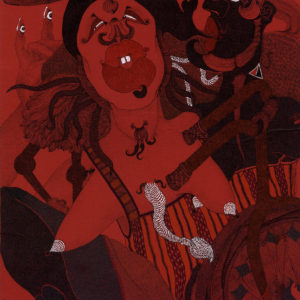 Fishdoll, a producer, singer, songwriter from Beijing, China breaks through with her debut album Noonsense, released on the Brooklyn based record label Paxico Records. Paxico is a label known for its eclectic sound, delivering a variety of music including Jazz, Electro, Ambient, Latin, Lo-fi, and Hip-hop.  Fishdoll’s Noonsense encapsulate the wide sonic range that Paxico has, and She manages to deliver the styles of jazz, pop, house, and electro in a cohesive fashion.

Fishdoll doesn’t hesitate to mesmerize the listener. She opens the album with “Toehead”, a song layered with synths, arpeggios, drum machines and angelic vocals that create an atmospheric vibe. Immediately the listener will know that they’re in for a stimulating trip. Transitioning into the next song “Bejing Well,” initially released as a single, the listener gets a sense of the range of sounds that Fishdoll will continue to offer throughout the album.  This song contains a mix of synthetic and natural sounds that brushes ethereal and earthly vibes on the canvas that is Noonsense. These vibes that create an altered reality are continued throughout the album as she conjures a meditative journey through her sleepy and ambient vocals layered on top of chaotic instrumentals.

Being a producer, Fishdoll uses her dreamy vocals as another layer to her unique instrumentals. Her vocals, paired with futuristic synths and a variety of instruments puts you in a cosmic state of reality. The song “Blueeyce” magically manifests this cosmic state by layering held vocal notes, harp strumming, ambient synths, and artificial drum sounds.

Noonsense is not an album that should be listened to on shuffle. To take in the mix of styles that Fishdoll offers, one must listen to the album from beginning to end. The variety of styles that she arranges throughout the album are meant to be heard in an orderly fashion, given that she provides spacey and ambient transitions that carry the vibe of one song to the next. The transitions from song to song presents that although her style changes throughout the album, each song is a rendition or evolution of the overlying vibe of the previous song. Along with the transitions between songs, Fishdoll has beautifully placed transitions and alterations of arrangements within each song. The track “Bubbling Bop” has an underlying synth layer throughout the song, but the track is broken into two parts with a transition of echoing and distant drums in the first half, to a quick break beat in the second. The album is dreamy, meditative, and diverse. Fishdoll makes the album a meditative journey through the adapted arrangements in each song that she approaches in a relaxed yet meticulous way.

“Bekew” is the closing song of the album featuring a fellow Paxico Records artist by the name of Pax. In the beginning of the song, Fishdoll incorporates Latin samples with up-tempo ethnic drums and chanting, then transitions into a dreamy mix of bouncing synths and angelic singing. Being the closing song, I feel that it plays an important role in the journey of the album, for it has an awakening and upbeat sound that wakes you from the dream state induced by the prior tracks of the album.