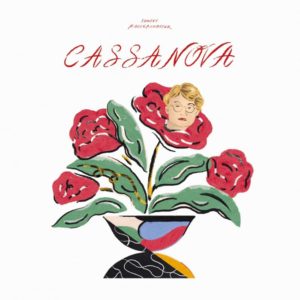 After 7 years, Taiwanese psych-soul group Sunset Rollercoaster have finally come forth with their second full length album, Cassa Nova. Playing off of the name of their 2011 release, Bossa Nova, the new album bares little resemblance to their original style. The gap between albums was bridged with the Jinji Kikko EP, which evolved their sound from fuzzy jangle-pop to a cleaner, 80’s inspired jazz-funk style. Cassa Nova carries this sound to new heights, refining and perfecting the experimental sound with more intricate instrumentation and an abstract story. The modern take on an exhausted era’s music makes this album stand out far above the rest.

In a generation fascinated with the styles and sounds of the 80’s, we are constantly surrounded by media influenced by the decade’s general aesthetic. Whether through the re-emergence of 30 year old fashion trends or the thematic appeal of shows like Stranger Things, the wave of 80’s nostalgia is unavoidable. Sunset Rollercoaster takes this nearly campy (and usually poorly executed) style of 80’s instrumentations and synth sounds and brings it into a more relevant light. The sounds of the album never feel redundant or tired, but rather revamps and breathes life into an overdone and trendy musical direction. Instead of taking the sounds of the 70’s and 80’s and making an album around them, they combine these sounds with modern songwriting and innovative instrumentation. This creates an album that comes across as reflective of the past, but willing to move forward into the music of the future.

The album tells the story of a young “casanova” named Card, a youth in pursuit of love. Following his journey in search of affection and understanding, the protagonist blossoms (as is referenced in the album’s art) and matures (as is referenced in the first and last track titles). However, the only reason this is known to be true is because of the band’s own description of the album. The lyrics remain mostly ambiguous and undescriptive of any plot, which leads to a less-than gripping storyline. However, the themes in the lyrical content of each song express a progression of growth and maturity. If a listener hears the album as thoughts of a character, a story is definitively present. If they listen to the songs individually or out of order, the story can be easily lost.

While the lyrics might be vague, the instrumentation is truly where this album shines. The first track, “Almost Mature ‘87” introduces the album with bouncy synths and drums that start mellow, but slowly build into a climax with guitars, crash cymbals, and drums fills. The use of at least 4 unique synth sounds to provide a catchy hook as well as background ambience give the song an immense amount of depth. Topped with a distant but cutting saxophone solo between verses, the song’s instrumentation grabs the listeners immediate attention. Tseng Kuo Hung’s soothing vocals match the song’s laid back nature, while still reaching more emotional levels in the songs half-time chorus. The second track starts with a single guitar, bass, and drum, but quickly adds vocals and many different synth lines to fill the song’s sound. While the addition of so many instruments throughout the song might seem like a lot, it’s never overwhelming and rather leads to each song feeling complete. Without the intricacies, the songs wouldn’t build and fall as smoothly and as powerfully as they do.

The third track is definitely one of the funkiest and most fun songs on the album. “Cool of Lullabye” grabs the listener with bouncy guitar, a synthetic cowbell, and a groove that could make anyone walk down the street like John Travolta in Saturday Night Fever. The verse’s reference to “Boogie-ing” expand on this idea, and make this track incredibly accessible. The chorus’s addition of falsetto harmonies, a consistently driving cowbell, and punchy synths laid over syncopated plucky guitar make this one of the most intricate yet satisfying moments on Cassa Nova. The song fades out and “Angel Disco Love” bounces into the listener’s ears. As the title implies, this song is heavily inspired by disco music. The sharp guitars and distinct drum patterns create grooves and melodies that are sure to be stuck in the listeners head for days to come.

“Slow” brings the album to a much softer level. The delicate synths and low-key vocals and drumming build slowly over the song, and with the addition of guitars and jazzy bass lines, build into the sister track “Oriental.” This song mirrors the vocal patterns from “Slow” while taking the instruments to louder and more powerful levels. The multiple piercing synths grow over a double-time bass line, and more and more is added until the song reaches one of the most intense levels on the album so far. “Summum Bonum” brings the listener back to a funkier mindset with its smooth groove and quick, punchy synths. “Libidream” is an expectedly dreamy track that progresses into an emotional and highly cathartic outro. “10-Year Taipei (Matured ’17)” brings the album to a close, bookending the album with thoughts on maturity. The final track is very upbeat, with a reminiscing tone comparing a current state of mind to mindsets of the past. The album concludes with a synth crescendo which is the same sound as the beginning of the first song off of their Jinji Kikko EP, truly tying the album and the EP together as a continuous era from the band.

Cassa Nova stands far above other “80’s-worship” albums due to its unique instrumentation and ambition to take the sound into the future. The album never overstays its welcome, running only 35 minutes across 9 tracks. Each track is unique and different from the last, and keeps the listener engaged and wondering where the album will take them next. While the lyrics keep the story vague, the thematic maturing across the album is definitive and echo the band’s maturing sound. Sunset Rollercoaster delivers a relevant and modern album with the best elements from decades past.