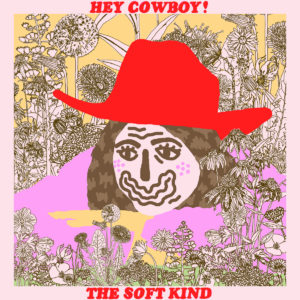 Shuffling about the floorboards at (insert DIY house venue), people pile up near the “stage” to watch Hey Cowboy!. Usually, the trio synchronize their outfits – western shirts, fringe, studs, various embroidered apparel – all depending on the occasion. But this is only the surface appearance for a relatively new act sporting a dreamy sound with a unique edge. The twinkles and grumbles of Hey Cowboy!’s set-list comes to a polish on The Soft Kind, a sweet collection of tracks neither too short nor too long, varied in pace, and a tinge surreal.

The combination of synth, bass and drum kit is what sets the band apart from the rest, described as “refreshing” to keep it sans guitar. This works for them from the beginning – intro track “Freckles” brings on a walking bass riff, then synth, then drums which slowly increase in tempo. Vocals act in place of guitar melody, crooning to fulfill the ambiance of would-be chords. The blend offers a remote take which only reminds of a couple acts such as Sneaks.

The songs are an intimate affair, however, both wrapped in aesthetic as well as based in a personal space of creativity. This is harbored by the supportive community of Denton but driven by the stoic nature the band carries; it’s something visualized easily by the band’s presence.

Mirroring “Cowboy” and “Cowgirl” take to this and offer the most narrative, alluding to a feeling of wandering and providing an artful attitude. The playfulness reminds of a quirky western movie, where large wooden backdrops of a saloon and general store loom over a quiet dirt road stuck in the middle of a cold desert – all the actors are kids in costumes but deadass serious. Everyone in town watches and dances in their personal bubble. It’s a stand-off. “This town ain’t big enoouugh for the both of uuus” is sung and the tension ironically builds on “Cowgirl”, only to break into a lengthy bridge that dips into a psychedelic state. The synths whirl and the bass bellows with an ominous roll. As it concludes though they yell, “SMACK HIM IN THE FACE”, and we have a victor. The dancing resumes.

It’s the simple decisions that prove The Soft Kind to be a cool, good album. It’s seemingly a principle of not over-thinking the production of the songs, the construction of the album, or even the essence of the very band. For 2018, that goes pretty far. Hey Cowboy! provide a level of eclecticism just right for a short-play album that reminds you its a humble beginning but also a clear indication of talent and, more importantly, having fun. “Spicy Tuna” ends the album with a gut-busting breakdown after an outer space, bedroom pop experience. Together you get an epilogue to a conclusion that’s such a good idea you wonder why it isn’t done more. But as mentioned, it’s probably something that just felt right over what seemed correct.