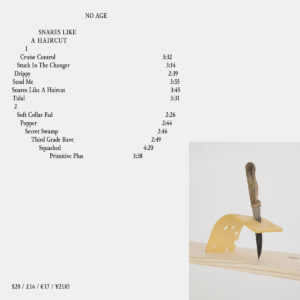 Like many of their tracks, it would seem that No Age have faded into ambient haze for most fans who fell in love with their breakthrough debut, Nouns. The Los Angeles rock duo had their 15 seconds of fame in the impenetrable thick blogosphere of the late 2000s, and reigned as indie champions alongside groups like Deerhunter and Vampire Weekend. Over the course of their last two albums, however—especially their 2013 record An Object, their most obtuse effort yet—No Age’s status as underground experimental rock head-turners slowly but surely declined, and their creative longevity was yet to be proved—that is, until now. Snares Like a Haircut, I hope, will be lauded as No Age’s triumphant return to form, and most brilliantly intriguing album to date.

This LP’s most shining success is easy to see: the band has elegantly combined the soaring punk ferocity and lovable hooks of Nouns with the most fascinating abstract and ambient elements of their previous record. The tag “dream-punk” works better with Snares than any of their previous releases; songs like “Stuck In The Changer” bang like any hardcore punk classic, but are punctuated by some indescribably heavenly guitar chords and effects, lending the track’s energy a certain bliss that can only be achieved in a really good dream pop tune. Randy Randall and Dean Allen Spunt make this seem effortless; even simply placing an overhanging guitar (or synth?) pad on top of a standard punk chord progression on the track “Popper” brings that dream-like quality without a hitch.

Snares’s tracklist is tight, and No Age’s affinity for artful interludes does nothing but enhance it. Between the stunning stillness of the title track to the subtly epic “Third Grade Rave” (which sounds much more joyous than whatever an actual third-grade rave would be like), the duo’s creative intellect is elevated like lifting clouds after a rainstorm. And this understated beauty leaks into the barnburners, of course, especially with the track “Third Grade Rave” leads into, “Squashing”, a psychedelic shuffle that paints wavering MBV-style guitar fuzz over sampled beats.

Dean Allen Spunt maintains his eyebrow-raising monotone yell throughout the record, but doesn’t exactly pull the songs out of their celestial glide. If anything, it lends an amiability to the record: punk music certainly doesn’t have to be hostile, and can be a vehicle for conjuring completely different emotional responses. Kind of like the knife on the cover, pinning down a slice of cheese: harmless! Snares Like a Haircut reigns victorious as a ray of light through the loud storm of rock music’s current landscape, and, a decade after their debut, finally realizes No Age’s full sonic potential.