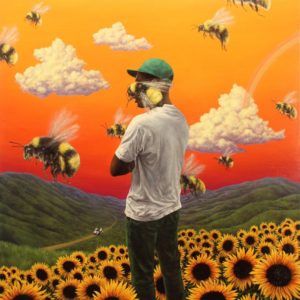 Tyler, The Creator has always been a provocative artist. His violent lyrics, crazy antics, and energetic personality garnered him a dedicated group of fans who wanted to be just like him, but also an equally dedicated group of haters. He started his career at the age of 18 with the release of his first mixtape, Bastard. Tyler is now 26 years old, and in those 8 years he’s matured a lot, and so has his sound.

Flower Boy is massively different from that first mixtape, and most of the subsequent music that followed. It’s much more melodic than his previous releases, and although many of the same aggressive elements from before are still present, they have been cut down. Instead, the focus of this project is the production and the features, which consist mostly of singers. Tyler himself does a lot of singing such as on “See You Again.”

On an interview with Stephen Colbert, he explains that he wanted to keep his rap verses short, but important. Everything he says is packed with meaning, and he uses a lot of creative metaphors. Most of the tracks on this project have a feature, and almost all of them are singers, including Rex Orange County, Kali Uchis, and Frank Ocean. This lead to a more intimate sound to the album, which emphasizes the personal themes found throughout such as accepting yourself, unrequited love, and feeling lonely.

The lyricism on this album is very good, and shows how much progress he’s made over the years. Lines such as “I’ve been in this fuckin’ room so long/My eyeballs are turning to dry wall” on “Boredom” explain his feelings in a creative and concise manner.  “You don’t have to lie/I can smell it in your eyes” on “Garden Shed,” details what it’s like to be unable to hide or ignore feelings.

Tyler produced the entire record himself, giving it his own unique sound. There’s a lot of synths, guitars, drums, violins, and bright clicking sounds. It’s very diverse and rich, the songs are complex but are woven together nicely. Many songs lead into the next, such as “Glitter” being a voicemail mentioned at the end of “November,” “Who Dat Boy” ending with Tyler driving off in a McLaren (his favorite car make), being followed by “Pothole,” which contains many car themes, among others. This allows the project to feel like one big narrative.

His previous album Cherry Bomb was a little different from his previous releases, but still contained most of the same characteristics that made him unique. I think Cherry Bomb was a necessary stepping stone to making Flower Boy, it allowed him to experiment a little bit without alienating his fan base, introducing them to the type of sound he ultimately wanted to go for. Flower Boy is the result of all this experimentation, and it’s unique. Outside of “Who Dat Boy” and “I Ain’t Got Time,” this project doesn’t contain the same aggressive nature from Tyler’s previous releases. But there’s enough elements from his past music to please old fans, but also a lot of different characteristics that will appeal to new fans.