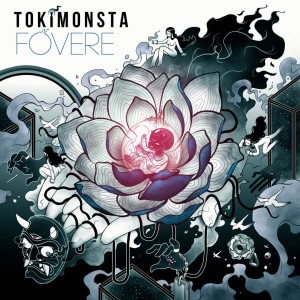 Few producers have emerged from the Los Angeles hip-hop/beat scene with such striking individuality as TOKiMONSTA. Since her 2013 release Midnight Menu, an impressive mix of wonky hip-hop beats and energetic synths, the Korean DJ has moved onto entirely new genres. Her 2014 album Desiderium showcases a more refined synth selection, as well as more prominent vocal features on standout tracks like “Open Air”. Jennifer Lee’s new work continues to take from electronic and dance records, backed by her ear for unconventional drum samples and her natural talent as a trained piano player.

Her newest release, FOVERE, is seven tracks long, but feels much longer given the kind of stylistic jumps Lee makes throughout the album. The tracks express strong blends of hip-hop, dance, and club music. Longtime collaborator and label-mate Gavin Turek appears on the ambient opener “I’m Waiting” as well as the downtempo “Penny”, the latter of which displays Lee’s ability to craft idiosyncratic details into simple dance beats. Underneath many of the vocals on the album are simple piano lines that manage to feel distinct and fitting in a largely electronic mix. The more instrumental “Starlight Lace” reminds you that TOKiMONSTA still has strong beatmaking chops, while also laying on vocals and dense sawtooth synths.

Still, the question becomes whether TOKiMONSTA is able to make these genres work for her and not the other way around. Though fairly consistent, the vocal features often fall short in making the tracks memorable. Lee and electronic trap producer KRNE try their best at creating a Hudson Mohawke-like backdrop for Anderson .Paak on “Put It Down”, and it works decently well, but Paak’s own album, as well as Knxwledge collaboration NxWorries, have demonstrated that the talented R&B singer is capable of much more. There are moments where Lee seems to back away from more interesting soundscapes and drum patterns in favor of matching the conventional dance sound, leading to pleasant but ultimately forgettable songs.

TOKiMONSTA’s strong percussive sampling is always a highlight of her work, and even when it shows on this album, the washy sound of FOVERE makes it harder to appreciate that intricacy. The constant reverb makes many vocal parts sound bigger and ephemeral, but with such nonrestraint that it feels impossible to grasp onto. This isn’t true for every track; the chorus of Jonny Pierce feature “Giving Up” offers a moment of intense clarity in the form of an infectious synth arp and funky bassline, which feels like finally finding dry land in a sea of unremarkable airy sounds. It hints at what the new FOVERE could have been: a proper continuation of the starkness and clearness found in Midnight Menu and other earlier releases. The project still has a consistent style, but it’s a style that doesn’t do TOKiMONSTA justice, as it carries the bad habits of the genres it emulates. Despite this, Lee continues to prove her skill as a producer, as well as her ability to express herself in any genre she chooses.