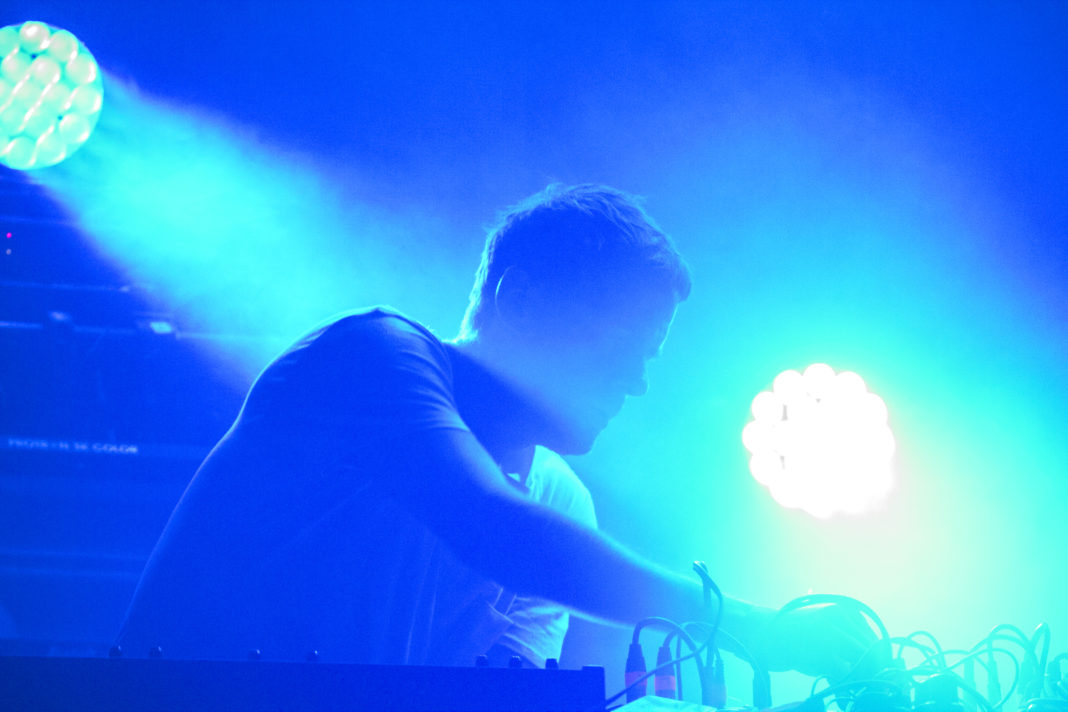 In support of Com Truise’s upcoming record, Iteration, it only makes sense to tour and bring the synthwave to the stage. On top of that, Clark’s Death Peak garnered its own attention since its recent release, placing the two prominent electronic acts in a similar situation. The bill was formed – well curated I might add – and the tour made its way to Deep Ellum for a solid performance at Trees.

Clark’s presence was enigmatic, and yet, familiar. The man stood behind a tangle of wires and a board of some sort high above his audience. Giant carts stationed to the sides of him held rows of lights which were only a fraction of the total light setup, and boy it was impressive.

The thud of four-to-the-four rhythms mixed with dizzying trance-like synth shook the ground and quickly made for an energetic evening. The strobing flash of light and color made an effective ambiance or the dancing floor, and there were people doing just that: dancing. Death Peak LIVE as well as the mix of variance genres – from techno, to house, to jungle – all played well into the aesthetic which Clark has put out for his live show and he most certainly impressed and probably surprised the crowd. But the only act which could possibly out do Clark on his aesthetic is that from Com Truise. The synth-fiend thrives off dystopic imagery and feeling, equally portrayed in his music. Com Truise fronts a particular style of electronic tunage, heavily focused on synthesized design and texture. A accompanying visual which mirrors itself in each and every release can be seen and heard throughout all of his songs, and this too was evident in the live set.

A maze of CGI buildings at dusk were displayed on the LED backdrop as he started tunes. More or less, Com Truise played tracks in chronology. First up were Galactic Melt favorites “Future World” and “Flight Wave,” boasting pure attitude which helped define the artist in his earlier days but have just as much weight in the present. Wave1 tracks soon followed, etc, bringing the interweaving of old renditions with new tunes.

The sound was crisp at Trees as all the fidelity required to experience Com Truise’s impressive palette for synthesized tone and texture was played at full volume through the system. The crowd bounced to the mid-tempo repertoire, and after a healthy amount of time passed, it was all over.