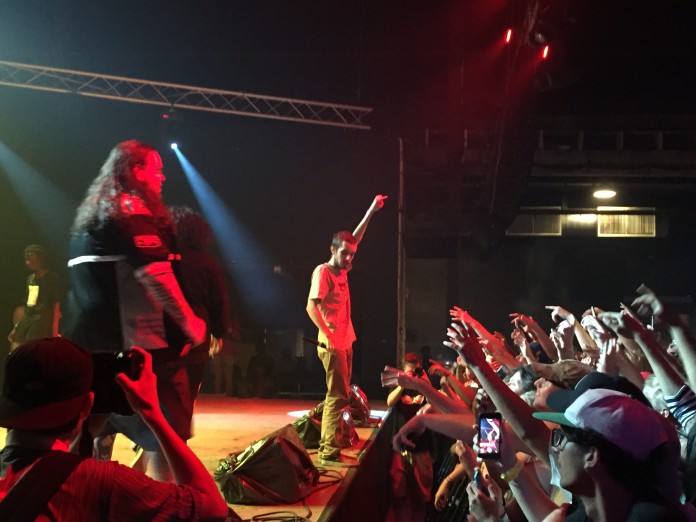 Hailing from Miami, Florida, the captivating 21-year-old Pouya is travelling across the country with fellow underground rappers Ramirez, Germ and Shakewell. His concerts are famous for their high energy, heavy bass, and the large mosh pits he enjoys calling ‘death pits.’ However, Pouya is arguably best known for his slick, Bone Thugs-n-Harmony influenced flow. This show in Dallas was the third of a highly anticipated nationwide tour.

On a hot summer night in Downtown Dallas, there are few better places to be than on artsy, vibrant Lamar Street. It only makes sense that the venue for Pouya’s show was South Side Music Hall. When you first walk in, it appears to be a hot spot for classic country dancing, complete with two wooden paneled bars and a large disco ball in the very center. The place is devoid of seats, making it perfect for the chaotic movement that was sure to take place that night. To start off the night, imagine a fully-lit stage and floor. Now add a blow up doll named “Kylie Jenner.” Then, add two children dressed in all white and shiny shoes acting as hype-men for two other fully grown men. This sounds like a fever dream, but one of the local openers for the Underground Underdog Tour, Tray Haggerty, made this strange scenario a reality. Both of the openers proved to be very eccentric and very engaging, pumping up the crowd for the headliners of the event. After all, with acts like Ramirez, Germ, and Shakewell, we would need as much preparation as we could get.

Following Trey, Ramirez is the first to enter the stage, and the audience was clearly eager to see him. He started off with “Six (Thank You, Memphis),” bringing out the darker energy of the crowd as people became more animated and finally began moshing. It was clear Ramirez was in his element, as he joked around onstage and looked truly at home holding a microphone and a cigarette in the other. He continued to play more of his well-known tracks, including “Young Urameshi” and “The Tears from Mary’s Eyes.”

Next to join Ramirez onstage are Germ and Shakewell. Shakewell riles up the crowd even more with his song “Sleeping Bag,” which has everyone jumping and shouting along. Germ keeps the crowd going with his aggressive songs, such as “Bout It”. Although the three artists have different sounds, they were able to create a cohesive and enjoyable performance before Pouya entered the stage.

Finally, the most anticipated moment of the night arrives: Pouya enters the stage. He starts his set off with “Suicidal Thoughts in the Back Of the Cadillac” and performs impressively well, as his flow is very rapid and technical – a much harder feat to pull off live than in a recording. He then brings the energy with his noteworthy song “Energy,” which invigorates the crowd even further. Although Pouya is the smallest on a stage full of DJs, photographers, and tour mates, he is able to capture the audience’s attention with confidence. He then keeps the night going by playing “Hunnit Hunnit” and commanding the crowd to open a massive mosh pit. Here, the show looks more like a metal concert than a rap concert – a notable trait of any underground rap show. Even though the $uicideboy$ weren’t there, “$outh $ide $uicide” and “Cold Turkey” were still performed and the audience somehow took the energy even higher than before with their shouting and moshing. Pouya then closed out the night with his aggressive song, “Get Buck,” leaving the crowd animated and wanting more. Even though Pouya announced the show was over, the crowd continuously shouted for an encore and would not leave the venue. Clearly pleased by his fans’ loyalty, Pouya decided to jam out with the crowd to “Chop Suey!” by System of a Down and “I Write Sins Not Tragedies” by Panic! At the Disco. It was clear Pouya was having a good time with his supporters.

At the end of the night, the venue smelled like sweat and smoke, but to the fans, that was the smell of a successful concert experience and good memories. Everyone now looks forward to the next time Pouya comes into town.