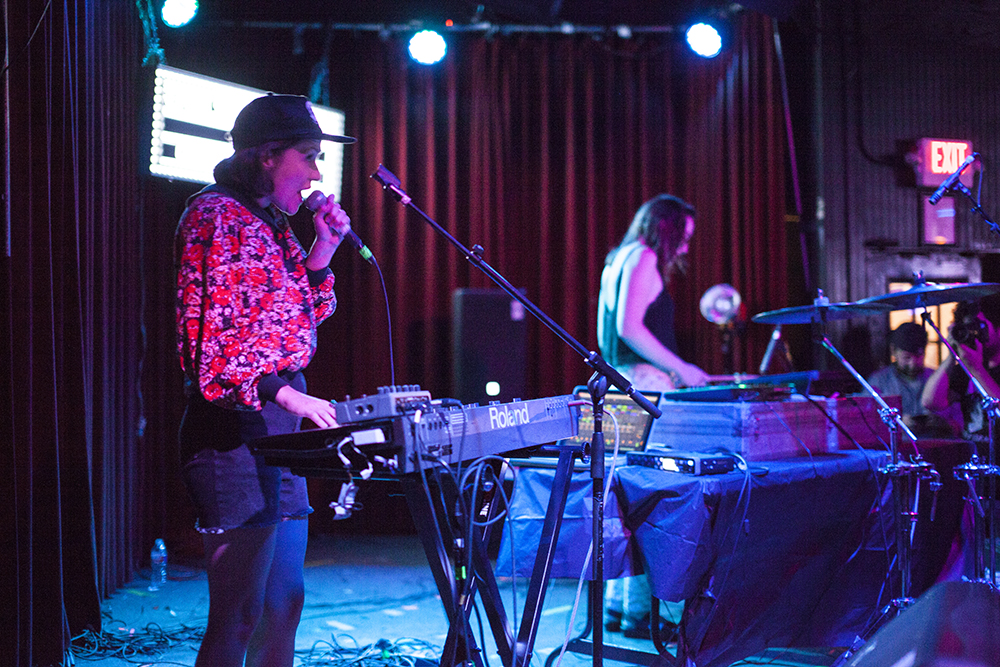 A healthy sampling of people idled across the floor of Dada early into the night. The courtyard DJ filled the background with sufficient jams, ranging from Kaytranada to Drake and more. A free crane game lined up 10 people at a time, in hopes of clawing a small plush toy and a CD. Princess Nokia, AKA Destiny Frasqueri, made a sly entrance through the front and toward the sound guy in his booth. She shortly after approached the stage and grabbed the microphone. “How is everyone?!” She said in a high voice. “Let’s have fun tonight.”

The voice and cue of music herded people from all corners toward the indoor stage. Princess Nokia, going more under the name of Destiny, performed and go-go danced to her tracks across the stage, periodically streaked back her hair through her long ponytail which passed her lower back. The fast, sample-based dance tracks were a fresh mix of funk and disco with influences of drum and bass along with some hip-hop to start the crowd moving. She also talked a bit about her music career, helpful for me who wasn’t too familiar with her history. This only became annoying when on the last performed song she stopped singing mid-track and switched to speaking straight to the audience and thanking everyone for having her. Some audience member handed her a plush unicorn from the aforementioned crane game, and she called him on stage to hug him. She practically skipped off stage in her cutesy manner and the venue prepped for the next act.

Cakes da Killa and his two backup dancers intensely entered the stage. Almost immediately the music assumed; a heavy, dutch-style beat blasted from the speakers and perked everyone’s attention back to the stage. The two dancers were going off. They were popping, locking, synchronizing, thrusting, jumping and all other moves in an impressive assortment of choreography and confidence blatantly shown on all their faces. The combination of this and the front man’s rapping created a ultra-high energy performance which without a doubt got the audience in its entirety moving as well. “Who here is sober? Y’all need to get working, this is sad, c’mon lets get it moving!” Whoever was still standing either started gyrating or left. The flamboyancy and intensity of Cakes da Killa was a congruent follow up to Princess Nokia, and a decent moderator for the well-anticipated headliner, Jessy Lanza. With a final twerk from the dancers and the frontman, he finished his set with a new track, another banger, and exited the stage.

Now enter: Lanza. The Hyperdub soul-girl sported a solid baseball cap covering her shoulder cut hair, a windbreaker and shorts. Her stage mate, introduced to us all by the name of “Tori,” assumed the role of drummer and beat-pad hitter while Lanza stood behind the synths and microphone. The speakers filled with the intro-sounds of her classic synth style, a low vibrating tone that transformed in the familiar song “Giddy,” featured on the debut album Pull My Hair Back. Lanza leaned in for her falsetto and nailed each and every word. Tori bobbed cool-ly as she struck each pad and drum as perfect to the recording as I could recall. Lanza held beautifully constructed chords on the synth and whaled them to their fullest. The duo produced the most impressive sounds of the evening, filling the room and my ears with perfectly balanced tones and decibels of music that I wished I had heard from them live sooner. She played her album in its near, if not actual, entirety, including “Fuck Diamonds,” “Kathy Lee,” and the title track “Pull My Hair Back.” She even graced us with newer tracks from her 2015 EP that had a similar effect on everyone. I was glad to see people grooving in a similar manner to myself. The only limitation was she didn’t have enough songs, but I was more than satisfied with the set.

In fact, I was very pleased with all acts in their own respect. It was a different and quirky arrangement, which I felt brought a decently ranged selection of styles, people and energies to the table. Lanza’s performance was stellar, to say the least, and I’m eager for more appearances such as herself and more to the Dallas scene. Another successful GvB x RBSS event.