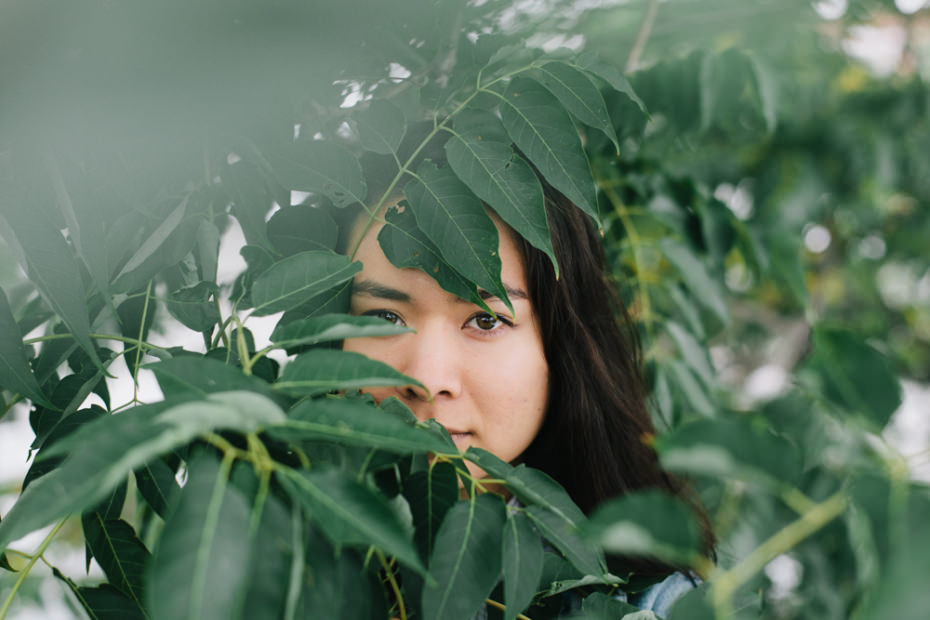 With the release of a critically-acclaimed album, a tour with Joyce Manor, and a extensive slew of showcases at this year’s South by Southwest, the past few months have been a whirlwind for 24 year old Mitski. Featuring a lo-fi sound with emotionally raw, honest lyrics, her most recent album Bury Me At Makeout Creek was called “a monumental achievement” by Stereogum. Mitski recently played an arresting show at the Prophet Bar, graciously sitting down to chat us after.

Radio UTD: I guess we can start with your writing process. Do you start with a melody first?

Mitski: It’s hard to say, gosh that’s hard. I don’t really have a process, it’s more like… melodies and words come together. I’m very word oriented, I guess, so the words come pretty early, then a bass line, and after that it takes less inspiration and more of just music theory and arranging. So I can’t tell how the first inspiration comes, but once it comes, you just build a song with that.

Radio UTD: No, it definitely is! How long does it usually take you to finish a song?

Mitski: You know, a good song usually takes 30 minutes, tops, because it just comes. But it doesn’t always happen that way, and sometimes I do it for like an hour and let it sit, maybe let it sit for a few days so I can get a fresh perspective and come back to it. It really just depends, honestly, on the song and what it needs.

Radio UTD: Do you draw from personal experiences, or is it all made up?

Mitski: Oh, it’s personal experiences, unfortunately, because I don’t have the imagination to make up songs, you know? I guess the songs that I do try to fictionalize just aren’t as good, so I’ve given up on that.

Radio UTD: How do you prepare yourself to be so personal in front of a crowd?

Mitski: That’s honestly a question I ask myself every night before I play a show, and I wish I had, like, a ritual the way baseball players do, you know? Just to get in the zone, but I haven’t figured that out yet. So sometimes, you really hit home and you’re on top of the world and you don’t know why. And other times, you just… eff up. I’m trying not to swear right now, but I’m really just trying to figure out how I can get to that point every night. I think it’s just a matter of, for better or for worse, trusting the audience, trusting that they’re people and they understand and they’re here to listen. And sometimes opening yourself up is really exhausting or really hard because you’re making yourself vulnerable, but when you do get something it’s truly, truly validating. So, it’s a gamble, I guess.

Radio UTD: Can you take about some musical influences? Or even non musical, just what do you draw from?

Mitski: My biggest influence, realistically, I think is Hayao Miyazaki. I just grew up with his films, and I’m just realizing now how’s he’s just shaped who I am. He really has just shaped me, and I guess every time I want to remember who I am, I watch his movies and I’m just like, Oh yeah, this is what it’s about. Yeah, I truly think his films are never cruel.Each of his characters has their own complex life and he loves all of his characters, and he especially loves his girl characters, and you can tell there’s so much love in him. He really cares about the story and what he’s telling. So that’s what I really look up to.

Radio UTD: What was the impetus behind naming your album Bury Me at Makeout Creek? I know that’s a Simpson’s reference, but is there anything behind that?

Mitski: It really was just a flash of inspiration. Honestly, I just had the Simpson’s on, I didn’t even care, and then Millhouse said that line and in that moment I was just like, that’s it. Something about that line, I guess. Most of my big decisions were made on impulse without thought.

Radio UTD: I know from a lot of your previous interviews that you traveled a lot growing up. Can you talk about how that influenced you?

Mitski: Well it’s hard to say because it’s all I know, so I wouldn’t know how else I would be, you know? I can only guess that it’s… I don’t really know. I don’t have roots, I don’t have community. I take a while to get to know people and open up, but at the same time, I adjust to environments really quickly. So it’s a mix of like, adjusting quickly, but on the surface level, never attaching for a really long time. That’s the main thing that it’s made me in to.

Radio UTD: Do you have any set goals for your future with music?

Mitski: My goal is to be able to live off the music that I make. That’s honestly it. That seems simple, but it’s actually really hard. I just don’t want to do anything else. And I’ve always had jobs, and I just don’t want those jobs anymore. I just want to do music. That’s my ultimate goal: to be left alone, to write my songs.

Radio UTD: Last question: do you have any words of wisdom for the college kids that will probably be reading this interview?

Mitski: Well, while I was in college, I hated college, but once I graduated I realized that it was fine. And similarly, I think you might not like yourself now, but just like, take pictures of yourself anyway. And later on, you’ll look at those pictures and be glad that you took them, you know? You’ll love yourself later, but you have to take those pictures now so that’s not lost.

The deluxe version of Mitski’s Bury Me At Makeout Creek is available now. You can purchase it here.