Home Feature Ode To Rock: A Dive Into the 1980s Cultural Phenomena 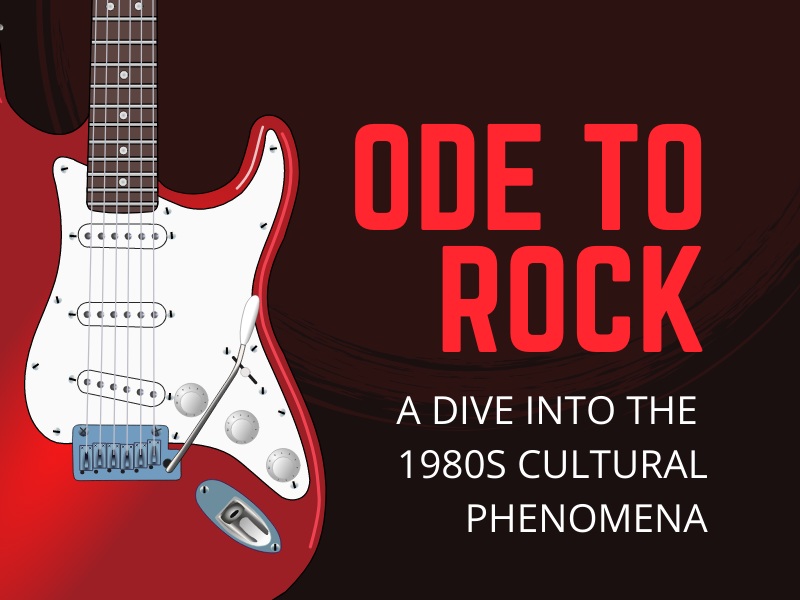 As music changes from generation to generation, each genre of the times takes on its own stereotypes and tropes as they fade into the past. The ‘80s, however, have one of the strangest and most unique cliches of them all. From the most famous of rock bands to some of the most underground groups of the ‘80s, they all have one, but no one seems to talk about it. Why does every group from the ‘80s have an ‘Ode to Rock’ song?

Growing up with music primarily from the ‘70s and ‘80s, I never really thought much about it. Getting most of my music taste from my dad, who is just as obsessed with oldies as I am, I thought that it was just because rock and roll really was the best thing to ever exist—at least in my mind. Of course there would be songs about how great the genre was! I assumed every genre thought this way about their own individualistic sounds and styles. It wasn’t until I started expanding my music taste midway into my teenage years that I grasped just how borderline cult-like many groups from the ‘80s talk about their genres.

As I continued on in life, extending my scope for music from back in the day, I brushed it off as merely a joke. There’s no way it’s that big of a deal. Must just be a couple of famous songs, right? It wasn’t until several years later that the fact looked me directly in between the eyes… Every single rock group from the ‘80s has an ‘Ode to Rock’ song. Every. Single. One. No, that is not an exaggeration in the slightest. Whether it is blatant or hidden behind deeply disguised metaphors, they exist nonetheless—and the more you look, the weirder it gets.

So, it got me thinking about two things: Is it really every single group? And why is this such a common theme? And their respective answers are yes, every single group, and it’s a little complicated as to why. Most of it is generational, and a bit political as well.

It’s no secret that the 1950s were a controversial time. The civil rights movement, the deconstruction of the nuclear family, and more took place during this culturally significant decade. The blues genre escalated into popularity during this time as well and was used by many artists to convey the overarching view of societal and cultural change within America. Many saw this art form as an expression of free speech, but those resistant to change saw it as an attack on society as they knew it.

Unfortunately, those resistant to change that held positions of power within their respective communities took to banning such genres entirely, from both households and community gatherings across the nation. As many of the famous rockers of the ‘70s and ‘80s were young, impressionable children, they understood that rock and roll was a controversial medium within society. But that’s what made it so much more tempting.

As the political shifts of the ‘60s and ‘70s approached soon after, rock was now liberated and was being experimented with. Psychedelic rock was a cultural phenomena of the time and was deeply inspired by the blues of the ‘50s, being used to carry political and cultural change amongst America’s youth. This shift was able to bring about the classic rock era of the late ‘70s and throughout the ‘80s. Bringing blues inspired music to the forefront and putting an intense and amplified spin on it birthed what we now know as rock and roll, or classic rock.

That now brings us to the question: Why does every ‘80s band have an ‘Ode to Rock’ song? The answer: The red tape that has surrounded the genre since the pioneers of the genre was born. These songs celebrate the genre and its liberation throughout the years, basking in their newfound ability to rock as hard as they want, whenever they want. Ode to Rock is the celebration of musical freedom. While these songs might be a little lost in translation to many modern listeners and be seen as a strange phenomena from afar, this genre has fought for its right to rock. Below are some of my personal favorites from this ‘80s trend, but hopefully each of these songs gives you a new perspective on how culturally significant these songs are and the impact they hold on modern day music.

One of the more iconic songs highlighted in this list, this song by KISS represents the true soul of what it means to idolize rock and roll. While this song is a cover of Argent’s original track from 1973, KISS puts a modern spin on it as reflected by the “II” in the title of the song. While the original version never charted into the Billboard Hot 100, KISS found this song amongst their greatest hits in their career. This song tells of how everyone, no matter what their job or where they are from, everyone can rock just the same. KISS’s rock ballad speaks volumes to the generation who fought for their right to rock and are now finally liberated.

Twisted Sister is notorious for their political songs that spoke directly to teenagers of the 1980s, and this song is no different. While the message of wanting to rock is clear, the deeper meaning of the song is about standing up to the system and not letting authority figures tell you what to do. Although many modern listeners might recognize this as the original track that inspired “Goofy Goober Rock” from the Spongebob Squarepants Movie, this classic ‘80s anthem showcases just how deeply politics were entwined within ‘80s rock. This song captures the rage and fun of the times and allows listeners to rock out as hard as they want with the band.

While not as heavy as the previous track, Triumph sings of how rock music is able to take you on journeys and feel emotions never quite felt before. Triumph tells the story of a girl who comes home from a rough day and prays that the radio DJ will play her favorite song and, when he does, all of her worries seem to dissipate as the song fills the room from her radio. Although this song is not nearly as famous as the other two songs, this highlights how every corner of the genre was willing to dedicate a song to their love for their respective genre.

This classic song is known by people all over the world, no matter what genre they listen to or what language they speak. Joan Jett’s iconic song brings people together in the simplest of ways to celebrate the joy and heart of rock and roll. This track is simple: Here, Joan Jett sings of her love for the genre, and urges listeners and the boy in the story to put another dime in the jukebox so they can dance and rock out all night long. Such a simple story and a call to action has cemented this song as a rock classic and showcases just how normalized this glorification of rock and roll is, even to modern audiences.

Another somewhat underground artist of their time, Y&T goes full out with their love for rock and roll in this hard-rockin’ song. While this one is probably one of the more extreme in its glorification of the genre, Y&T takes listeners on a musical journey of love for rock. This track is full of heart and definitely one to crack up and jam out too, but definitely not a song for those who prefer classic rock. Although this song isn’t necessarily a classic, it’s a great representation of the praise this genre of music received at the time and how obsessively many would praise it.