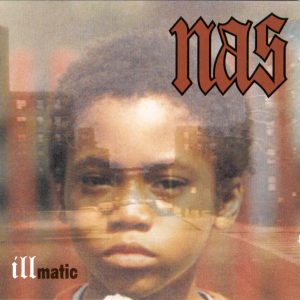 Nas has reached new prolific heights as he reintroduced himself as hip-hop’s favorite son with his award-winning King’s Disease trilogy. Illmatic, Nas’s left-field debut album has set up most of the east coast culture ever since its April 1994 release, and is still credited as one of the most influential albums in hip-hop history.

Arriving at a time when New York and east coast hip-hop couldn’t keep up with the beastly gangsta rap of the west coast, Nas burst onto the scene with 40 minutes of genre-changing rhymes. Starting off with “The Genesis,” Nas utilizes the sound of a New York subway to launch into Nas speaking with his friends. Nas’s intro lyric is sampled from his debut verse on Main Source’s “Live at the Barbeque.” It’s a classic intro style that is replicated in a lot of music today. It segues into “NY State of Mind,” where Nas fluidly recites the famous line “I never sleep, cause sleep is the cousin of death.” There’s so much meaning to unpack from that line, and especially with the rest of Nas’s ferocious lines. I can’t put my finger on it, but it’s such a jarring line that perfectly envelopes the listener into the struggles of living in a poverty-stricken urban landscape like Queensbridge.

Nas follows “NY State of Mind” with “Life’s a Bitch,” which is an honest insight into life in the projects. It’s AZ’s debut verse, and there’s been a longstanding debate on who had the better verse.In addition to AZ, Olu Dara is listed as one of the featured artists, which is actually Nas’s father performing the trumpet solo. “The World is Yours” has a relaxing ambient piano instrumental loop with DJ Premier’s bewildering scratches, adding emotion and depth to Nas’s lyrics. It’s obvious that Nas is clawing for something, anything different from his life in Queensbridge. He’s fed up with the daily drama and beef that Queensbridge has, and is wishing for a different color in his life. “Halftime” has an amazing instrumental, with the jingles and broadway trumpets on loop that just scream of a wintery New York. “Halftime” was originally released as a single prior to Illmatic, and it’s a key single that grew Nas’s popularity and built anticipation for Illmatic’s release.

Moving onto the second half of the project, “One Love” is an eye-opening track that speaks to the generational trauma of project residents. Again, Nas’s vivid imagery showcases the struggles he’s experiencing in Queensbridge. It’s really subtle and clever, but the lyrics read like letters to his friends stuck in prison, sharing important news and making jokes along the way. In 1994, this type of lyricism and imagery were revolutionary. “One Time 4 Your Mind” speaks to the troubled experiences Nas has just by being from Queensbridge, one of which was the fact that he could be arrested at any point for a crime he didn’t commit or that the locals ran him out if he said he’s from Queens.

Illmatic broke a number of seeded rules in hip-hop, such as using multiple producers for a single project. Those producers were the likes of DJ Premier, Q-Tip, Pete Rock, L.E.S. and Large Professor, some of New York’s finest at the time. The production is great in its variety and simplicity; they don’t cover Nas’s flows or his cadence like in today’s more popular sounds. In addition, Nas’s pen for storytelling and imagery is like no other, and, at the time, the idea of using a letter as a track was simply unheard of. Nas set out to craft an album that was the streets, and he accomplished that with everything from Queens’ industrial undertones down to its cracked foundations.

Nas is your favorite rapper’s favorite rapper, and it’s not hard to see why. Nas’s verses, thematic execution, and raw delivery produce such a mesmerizing body of work, even to today’s standards. Illmatic is a timeless classic, dazzling the senses and moving the listener from their chair to Nas’s Queensbridge of the early ‘90s. It’s the quintessential hip-hop album for die-hard fans and interested newcomers to dip their toes into.