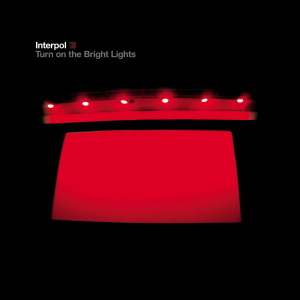 The first time I heard Interpol was unintentional; a song from Turn On The Bright Lights auto-played after an album I was listening to had ended. I rushed to my phone to check what it was, because it was somehow replicating a sound in my mind that I had always wanted to hear, but was sure didn’t actually exist. There’s an eeriness to Turn On The Bright Lights, as if the band is performing to an empty amphitheater with zero bodies absorbing the soundwaves. Individual guitar strokes reverberate infinitely as Paul Banks’s merciless voice cuts through the dense wall of sound. Heralded as an indie rock essential, Interpol’s debut album asserts the band’s claim among the vanguard of the early 2000s NYC rock scene.

The stage is set with “Untitled,” a mostly instrumental track originally intended to open the band’s live shows. It contains only one verse, but that’s all that’s needed with such evocative guitar melodies. Themes of romantic relationships are woven throughout the album, precariously teetering between slightly absurd and surprisingly insightful. “I wish I could eat the salt off of your lost faded lips,” the narrator proclaims on “Obstacle 1” as he mourns the death of his love interest. At times, Banks’s vocal delivery channels a four-year-old grossly engaged in a solitary game of elaborate make believe. He wholeheartedly accepts what he says as the truth, and you’re able to glean a general idea about the world he’s immersed himself into; but, without being inside his head, the details seem murky and out of context.

This ambiguity is similarly present on “PDA,” wherein the narrator’s morality is called into question. “You are a past dinner, the last winner / I’m raping all around me,” he divulges before affectionately murmuring, “You’re so cute when you’re frustrated, dear / Yeah you’re so cute when you’re sedated, dear.” The accompaniment to the tale of a love turned sour cleverly swells and contracts in anticipation of the song’s final moments, in which the rhythm and lead guitars ignite into a cathartic release, resolving all tension the narrator has indiscreetly created for himself.

“Say Hello to the Angels” thankfully replaces the slimy character from “PDA” with one who’s endearingly lovesick. The lyrics are uncomplicated, clearly outlining the narrator’s infatuation with the subject with little room for interpretation. “You lack the things to which I relate / But I see no harm,” he reasons in the opening verse. In a desperate attempt to lay all his cards on the table, he breathlessly hurls praise at a dizzying speed, insisting, “When I’m feeling lazy, it’s probably because / I’m saving all my energy to pick up when you move into / My airspace.” The candor of the narrator’s thoughts is refreshing, for though they are straightforward, there’s something beautifully poetic about them. “Oh, each night, I bury my love around you,” he confesses. The intimacy of the lyrics contrasts sharply with the invigorating guitar riffs–you want to console the narrator because you understand his affections are likely unreciprocated, but the urge to get up and dance recklessly is irresistible.

“Hands Away” provides a cheeky interlude to the album, imagining an erotic scenario between a man and his partner of the same sex. Banks’s distant voice croons over the slow burn of a subtle crescendo, granting the audience a chance to catch their breath. The momentum is quickly reset, however, with “Obstacle 2,” in which the narrator’s composure seems to gradually unravel. “I’ll stand by all this drinking if it helps me through these days / It takes a long time just to get this all straight,” he asserts rigidly in the chorus. As the song concludes, Banks erupts into an exclamation that parallels an untamed wolf howling at a full moon.

The character in “Roland” is particularly absorbing, adopting the persona of a serial killer’s best friend. “My best friend’s a butcher, he has sixteen knives,” he states matter of factly,  “He carries them all over the town, at least he tries / Oh look, it stopped snowing.” The narrator’s nonchalance is disorienting; is he simply unfazed by his friend’s criminal practices, or is he intentionally deflecting the listener’s attention? Regardless, the bond between the speaker and subject is strong. “He severed segments secretly / You like that / He always took the time to speak with me / And I liked him for that,” he boasts. Banks’s voice is slightly distorted, as if it’s coming from an intercom speaker, or even through a phone behind the glass of a jail’s visiting center. “He was growing on me,” he muses at the thought of his friend behind bars.

Identification with the narrator is restored on “The New,” a sobering acknowledgement of the fragility of love. The song begins with a promise of a better future: “One day, we’ll live together / And life will be better / I have it here, yeah in my mind.” However, as the song progresses, it appears this might be a hollow vow. “I can’t pretend I need to defend / Some part of me from you / I know I’ve spent some time a-lying,” he concedes. After the obligatory first verse, pre-chorus, and chorus, the song bursts at the seams with a slicing guitar solo, destroying any modicum of structure the track had. The remainder of the runtime is dedicated to numerous instrumental breaks, teasing the listener into believing each time the guitar rests the song will finally end. The procrastination of the conclusion feels deliberate, almost as if the narrator is stalling making the necessary changes that would fulfill his promise.

20 years after its release, Turn On The Bright Lights still feels as fresh and exciting as it did upon its debut. The songs are timeless, transcending the boundaries of age, year, and location. Not a moment is wasted, and each of the eleven songs rightfully earns its place in an album that mystifies as much as it illuminates. Truthfully, I think Interpol has yet to surpass what they achieved with Turn On The Bright Lights. The band’s sound has remained fairly stagnant with each subsequent album, and though there is comfort in consistency, it feels as though their efforts are an attempt to parrot what they have already accomplished. When you establish a mature sound at a young age, it’s difficult to find room to evolve. At once a hypnotizing snapshot of post-9/11 New York and the perennial blueprint for a post punk revival, Interpol’s Turn On The Bright Lights plants its flag in the corpus of alternative rock.