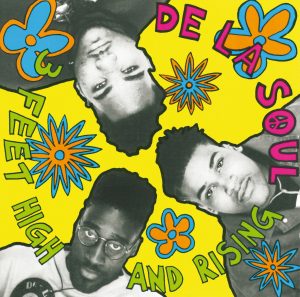 In the summer of 1985, three failing students at Amityville High in Long Island would form what would become the momentous hip-hop trio known as De La Soul. The performing members of the group were two rappers, Posdnous and Trugoy, and a DJ, Maseo (Plug One, Two, and Three, respectively); Prince Paul factored in to the group a bit later, becoming the glue of the group by contributing production and mixing. Their names, along with their first demo cut “Plug Tunin’ (Last Chance to Comprehend),” were derived from a record belonging to Posdnous’s father. The circumstances under which the group members and their performing names were created was an implicit sign of the group’s future artistic work, not only with their class-clown attitude coming across abundantly through their lyrics, but also due to the sources of inspiration they would draw from in composing their sound and identity.

Take the hit “Me Myself and I,” for example; even through De La Soul’s resistance toward intentionally making a radio-friendly song, they shine. This is due partly to their unamused vocal deliveries and zany lyrics, but also because of their vitalizing, funky beat selection. Although the track is likely their biggest even today and would be a great one for introducing listeners to the group, De La Soul backed the single by an even more impressive supporting cast of hip-hop classics and interstitial “bug-out” pieces on the rest of the album.

Examples of the former come with comedic narratives like “Jenifa Taught Me (Derwin’s Revenge),” which paradoxically manages to be both explicit in its sexual revelations and squeaky clean through its euphemisms. With Pos and Trugoy alternating on the track, the two rap about a girl in a linear fashion from their own perspectives, making for a twist-ending at the realization that “Jenny” may not even represent a person. The song is highly rhythmic and implores you to dance, likely taking some contemporary inspiration from Jungle Brothers’ house-influenced hip-hop cut “I’ll House You.” The group takes it a step further, however, by factoring in storytelling, one of rap’s most integral characteristics.

The album comes with tidbits separating several of the songs, acting less as skits and more as stitches for the normal-length tracks. Standouts among these are the chant-worthy “Take It Off,” with an unassuming earworm of a chorus begging listeners to move on from the aged fashion choices of the early ‘80s. Rarely, the group will even feature two pieces such as these back-to-back; the droll “A Little Bit of Soap” follows “Take It Off,” once again calling on listeners to spring into action—this time, to take a shower. These fragments of the record are likely where Prince Paul’s contributions come into the most light, with such bits as “Cool Breeze on the Rocks” working even better in execution than concept due to its singular nature. After all, a song composed entirely of surgically-sliced samples saying the same things sounds like it shouldn’t work; however, De La Soul once again shatters the mold in their composition of the piece, forming a surprisingly cohesive sequence out of their sources.

The group’s last single off of the record was “Eye Know,” a cheery, bright track that helped boost the group’s popularity aside “Me Myself and I.” As a full-on love song, “Eye Know” once again proved that the group was unafraid to break away from standards and conventions, which, at the time in hip-hop, were mostly about acting hard. The production matches the temper of the song entirely, with warm guitar strings and serene whistling to back Pos and Trugoy’s heart-eyed vocal performances. The chorus of the track also took to fresh ground, with Steely Dan’s sampled line “I know I’ll love you better” being the only vocal member before affectionate, ruminating horns finish the chorus on their own.

A couple of my favorite old-school hip-hop songs of all time come with this record, such as “Say No Go.” This cut is an anti-drug statement, with Posdnous bringing a verse that even ropes in Mase’s thoughts on the topic; when Pos ends his verse with “Tell ‘em what to say, Mase,” the DJ responds with scratched samples of Daryl Hall’s vocals, “Say no go.” The group’s message is supported by the incredibly dope beat, with several elements working together in harmony. Specifically, the ill drum pattern coincides with a synth perfectly, then weaves into a musing horn break to punctuates the group’s words. Another jewel in my eye is “Buddy,” the predecessor to A Tribe Called Quest’s “Scenario” as the ultimate hip-hop posse cut. Several other Native Tongues members appear here, with Tribe, Jungle Brothers, and more delivering unforgettable verses that I’ve had memorized in full for years. The beat here is as funky as it gets, utilizing heavy horns and hard-hitting drum kicks.

Here comes the buzzkill. Unfortunately, with samples come sample clearances, and when you don’t get samples cleared, you get sued. The situation surrounding 3 Feet High and Rising’s clearances, or lack thereof, is a messy one; most were cleared, but very many weren’t, making for a long-standing conflict with lawyers, label executives, and De La that is ongoing even today. Though the album is regarded as a classic by many, the record still has yet to appear on any streaming services as of writing this, over 33 years later.

Although the downside of De La Soul’s debut often preceded a conversation about the artwork itself following the legal battle, the album changed the way that producers thought about crafting rap music. While it blurred the lines of hip-hop when it released, pulling from a head-spinning number and variety of musical and non-musical sources, the record ultimately came to define the genre, ingraining sampling as an even more principal and fundamental element of hip-hop music. This is without mentioning, of course, that the trio needed Posdnuos and Trugoy’s off-the-wall raps in order to truly flower as a unique act. Regardless of its status on accessible applications for people today, 3 Feet High and Rising acted as a landmark moment in the evolution of hip-hop, pushing the boundaries of what rap music was and could be. It serves as the meaning of what it takes to rearrange a genre’s framework, in a genre where evading the norm is rooted in its very origins.