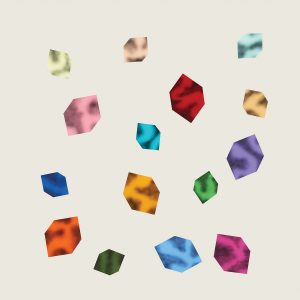 If Turnover’s discography was visualized in a Venn diagram, the “2013” and “2022” circles would have zero overlap. With each release, the band has unfolded itself to reveal a new sound, a new image, a new identity. Myself in the Way, Turnover’s fifth studio album, continues to propel the band from its emo/pop punk roots and lands in a world assembled from blues, jazz, and disco influences.

The album is a welcome palette cleanser from their previous 2019 release Altogether. Though it’s not difficult to identify the sonic threads connecting Altogether to Myself in the Way, this latest record feels more carefully considered than its predecessor, returning to the candid songwriting approach that made Magnolia and Peripheral Vision so special. The groove-heavy soundscape is a solid addition to Turnover’s repertoire; although, if the band’s history is any indication, fans already know Myself in the Way is only a temporary stop on a train that constantly moves forward.

“Stone Station,” a zigzagging synth instrumental, briefly introduces the album before segueing into “Tears of Change,” wherein Austin Getz contemplates the future against a sleepy blues guitar solo. The tranquility is abruptly dissipated, however, as “Myself in the Way” resets the momentum with disco-inspired dance breaks, featuring enthusiastic strings and distorted guitars that mimic liquid flowing through a maze. Longtime Turnover fans will likely be disarmed by Getz’s voice here, as this is the first time in the band’s discography that it’s disguised by a vocoder. The vocal experimentation is easily embraced, though, especially since it’s chaperoned by the voice of Turnstile’s Brendan Yates in the song’s final moments. For massive admirers of both Turnstile and Turnover like myself, this single collaboration is likely enough to excuse any potential dissatisfaction with either band. Even if listeners are not charmed by the novelty of a Turnstile/Turnover alliance, the collaboration nevertheless warrants respect for being the first time a voice other than Getz’s has appeared on a Turnover track.

Disco’s fingerprints are continuously left throughout the album, making the dance floor look attractive with “People That We Know” and “Queen in the River.” In a bold stylistic choice, autotune on “Pleasures Galore” warps Getz’s inflection as a playful flute twirls around Nick Rayfield’s rhythm guitar and Casey Getz’s driving drum kit. “Ain’t Love Heavy” is particularly compelling, featuring yet another foreign voice that has the privilege of being transformed by Will Yip’s production. Bre Morell’s manipulated vocals pulse in and out of the listener’s ears as bouncy synths and string lines refuse to let the party end.

The album paces itself efficiently, consistently alternating between energy and leisure. Respite from the disco celebration comes in the form of “Wait Too Long,” “Mountains Made of Clouds,” and “Fantasy,” as dreamy explorations are grounded by Dan Dempsey’s comforting bass lines. “Stone Station Reprise” revisits the album’s opening track, this time with a jazzy saxophone solo performed by Justin Bartlett, and “Bored of God / Orlando” concludes the album as the narrator reflects on how easy it is to let life slip through your fingers. In a wonderfully paradoxical fashion, Myself in the Way successfully demonstrates what would happen if a ‘70s disco album popped a melanin pill, but is committed to fighting off the drowsiness for the sake of one more dance.

This juxtaposition is also present in the lyrics, which make this album feel familiar, albeit sonically incongruous, to the band’s earliest works. Magnolia and Peripheral Vision excel in their abilities to place overwhelming happiness and sadness in conversation with each other, creating a dichotomy that makes these albums engrossing. While listening, one almost feels like a voyeur pulling back the curtain to take an illicit peek into the songwriter’s psyche. However, Good Nature, the band’s third release, seemed too focused on promoting positivity and banishing negativity to feel authentic, and on Altogether, it was as if Getz had completely built a wall between himself and the audience. The latter was fun to dance to, but singing along seemed frivolous when nothing was really being expressed. Both albums have their merits, but they don’t feel as though they’re from Turnover, as they fail to meet the precedent established by the first two albums. On Myself in the Way, it appears windows have been installed in the wall that Altogether built, and we’re able to peek inside the songwriter’s mind once more. The emotional juxtaposition that characterized the band’s early sound is being restored, and it feels like I’m listening to Turnover again.

As with any band that drastically alters its trajectory, I was initially skeptical of Turnover’s route. The change in direction inaugurated by Good Nature left me wondering if the band would ever be, for lack of a better word, “emo” again, and with Altogether, I was sure the answer would be no. Certainly, Turnover could not be described now as emo in an aesthetic sense, but Myself in the Way does make me emotional, begging me to get out of my seat and move as I experienced with their early works. Notable collaborations have proven beneficial, and bold production techniques elevate this release from interesting to impressive. This album reassures me that Turnover has always had the same goal in mind, they’re just approaching it from different angles until they arrive at their destination.