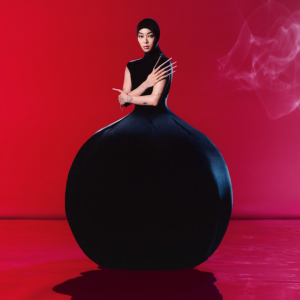 The Japanese-British pop star Rina Sawayama has released her sophomore album after the lead single “This Hell” received rave reviews this past summer, just in time for Pride month. Sawayama has always honored her sexuality and heritage through her music. With Hold The Girl‘s gorgeous ballads and innovative storytelling, she continues to take pride in who she has become.

A few days before the album’s release, Sawayama gave her fans a sneak peek with a 5-track EP titled Hurricanes that includes the lead single and title track of both the album and EP. The range of this album is exhibited with each track in the EP, pulling from Y2K pop, 90’s country, and glam rock. Though Sawayama has the talent to cover a range of genres, she makes the mistake of attempting to cover all of them in one album.

13 tracks spanning 46 minutes and 4 seconds of Sawayama setting herself free and healing her inner child through grungy and passionate lyrics that she screams to her audience. When listening to tracks like “Frankenstein” and “Your Age,” you can almost feel how therapeutic it must have been for her to write this album. Those that have suffered from losing themselves in toxic relationships will relate heavily to these tracks. The lyrics “Put me together one more time / Love me forever, fix me right / I could be your Frankenstein, Frankenstein,” lead the chorus as she pleads for her codependency to solve her issues. This track was the first one written with Academy-Award-winning producer Paul Epworth; you can hear the grief of a troubled relationship, which Epworth has written about with artists like Adele.

The lead single “This Hell” was an immediate hit. It begins with an aggressive guitar rift, with hints of Michael Jackson’s “Beat It” and synth beats layered perfectly on top. The message behind this track encapsulates most of what the album represents: Sawayama being unapologetically herself. She is authentic not only in her words, but also in her sound. With a mix of country pop and electronic dance, she creates a sound that seems to challenge itself, yet it works in a magical way. The electric guitar is powerful, and plays its main role in the verses as gorgeous vocals and, ironically, an orchestral choir encapsulate the pre-chorus as Sawayama sings the line, “Walk a mile of these coals, busy cleansing my soul.” This track is filled with satire, playing on the bigotry of those that believe that those that are queer will be sent to hell.

The theme of religious trauma in a few of these tracks helps tie the whole album together. “Holy (Til You Let Me Go)” is the ultimate middle finger to church schools, and recaptures the moment Sawayama found herself outside of her religion. She mentions the significance of the church bells ringing in the intro as a reference to her time in her religious school. Those that have found themselves significantly distanced from their religious upbringing can relate to the aching pain that Sawayama experiences, as she realizes how much of herself she lost while trying to please others: “Found my peace when I lost my religion / All these years I wished I was different.”

She also channels pain in “Send My Love To John,” this time through the eyes of a mother. Sawayama sought inspiration for storytelling through Taylor Swift, especially in her more recent projects like Folklore and Evermore, which both tell stories in the third-person. Based on one of Sawayama’s friends, “Send My Love To John” is a soft ballad sung from the perspective of a mother. The narrator finally sees the connection between how she left her family for her own sake and how her son lives his life in transparency for his. The guitar being plucked slowly throughout allows Sawayama’s vocals to shine through; this also allows for her words to become more powerful, as her listeners must pay more attention to the lyrics rather than the music itself.

I believe great albums are ones that break out from whatever confines other albums – whether that is expectations, contentment, or the need to stick to the status quo. Sawyama does everything except stick to the status quo on Hold The Girl; the problem is, she may have jumped the gun. Because she covered a wide range of genres and topics in her album, she was not able to excel in one area, but instead partially accomplished all of her goals for this record.