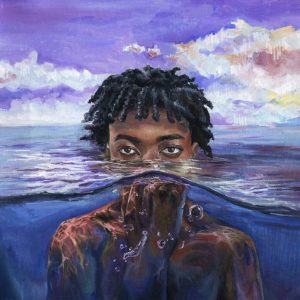 Three years ago, at the age of just 15, a largely unknown PG County, Maryland rapper and producer by the name of redveil released his first project, Bittersweet Cry. Though the tape was extremely rough around the edges in terms of the mixing and narrative, it showed promise for the newcomer. The following year, I learned about redveil the way that many did: music reviewer TheNeedleDrop’s unabashedly closed-minded reception of a few of his tracks over a livestream. Some of the criticisms were fair, such as the notably lopsided mixing and redveil’s clear inspiration from Earl Sweatshirt. What most failed to see, however, was redveil’s evident ear for soul samples, hard-hitting beats, and ability to write poetic raps and hooky choruses, all of which were supplied in abundance with his moving 2020 debut Niagara. redveil had a gift, and I was excited for his next move.

To the delight of fans, redveil announced that his next record, learn 2 swim, would be entirely self-produced. Although soul samples remain a consistent theme with this new album, the methods in which veil reworks these into the music show a wiser, more mature knowledge of making music as a whole. Take the project’s opener, “together,” for example; rather than simply looping the vocal sample in the music from start to finish, as was done in much of Niagara, redveil instead reworks bits and pieces of the sample into the track with structure and an elevated level of progression. The track begins with beautiful piano chords and an equally-as-engaging sample, immediately crafting a sonic landscape for redveil to build upon. As the drums break down into the track, followed by a saxophone rendition fit for a Late Registration-era Kanye West track, veil comfortably opens up about the direction his life took after the success of his previous release. The opening line manages to be both straightforward and thoughtfully dense, where redveil raps “Said when that air hit your lung, what you gonna do with that breath? / Watch the weight of my tongue, put my name on my chest.” There couldn’t be a more perfect opener for the record, as it previews everything there is to love about learn 2 swim.

“together” segues smoothly into the album’s first single, the even more impressive “diving board.” redveil is on top of his game on this track; every single layer of the production stands out magnificently, working like a well-oiled machine to create structured, soulful jazz. One of redveil’s best vocal performances also comes from the track, with addictive flows and memorable lyrics coming from every pocket of the song. The track is not only a toast to the success he has achieved so far, but also a slightly foreboding thought on the need to maintain his status and continue to progress in order to avoid falling off.

The entrancing cut “shoulder” parallels “diving board,” with redveil letting go of his aspirational side and giving in to the more somber feelings clouding his thoughts. The two tracks act as a devil vs. angel situation on redveil’s shoulders, whispering the woeful thoughts of “shoulder” into one ear and the uplifting desires of “diving board” into the other. Further complementing “shoulder” is the gloomy shift in tone taken in the alluring production, such as the rainy-day synth chords, and the awe-inspiring vocal performance of feature guest Mekdelawit. I especially loved the callback at the end of the track to Niagara’s “Drown,” where redveil alludes to the track and it’s title using the same submarine-like siren effect from “Drown.”

The follow-up single to “diving board” was the bop “better,” yet another track indicative of redveil’s maturation in creating music. With a naturally flowing sequence guiding the arrangement of the song, this cut hammers home the idea that redveil has vastly improved his ability to artfully design his music in a progressive manner. Sam Truth’s guest appearance here is the best on the record, leaving a footprint with his memorable introduction, chorus, and outro that appear to effortlessly translate the production into lyrics.

“automatic” features guests Fly Anakin and Ovrkast. on a movement-inducing soul-trap beat, similar to much of the production on Niagara. The production here is redveil’s most hype on the album, with the kicking drum pattern backed by his yell-worthy chorus expressing unyielding hope in the face of oppression. Though Fly Anakin gives a decent performance on the track, I feel that Ovrkast.’s verse could have easily been replaced with a far better one from redveil; veil’s absence is even more surprising given that the beat sounds tailor-made to suit his voice.

redveil falters on the album with “sky,” a filler track that feels insignificant in the context of learn 2 swim. The track doesn’t attack anything interesting either vocally or production-wise, meandering without purpose. In addition to this, redveil’s bridge exclaiming “Pussy boy don’t want war at all” comes off annoying, with the lackluster iterations of the phrase making the track far worse. With that being said, I do appreciate redveil for adding his own delayed background vocals to the bridge, as this idea could be used in a more realized attempt.

Undoubtedly the most beautiful track on the record, “mars” is redveil at his most brutally honest. Speaking on both his inability to feel at home and his uncompromising persistence to find his place in the world, redveil develops his most diverse and passionate vocal delivery as of yet in his expression of these ideas. The otherworldly production further emphasizes veil’s feelings of isolation, breaking down with a solitary guitar solo before redveil decides to confront his problems head-on. The album’s closer “working on it” picks up where “mars” leaves off, beginning “I don’t wanna run no more / I don’t wanna run no more.” The track is redveil’s promise, declaring himself destined to learn from his mistakes made in adolescence during his transformation into an adult.

On learn 2 swim, redveil brings together a solid and cohesive follow-up to 2020’s Niagara. I feel that redveil deserves credit for not taking the easy route by simply putting out Niagara 2, as this likely would have satisfied fans given the 20-minutes-and-change project allowed for a substantial hunger for more of the same. Generally, redveil’s risks of delving into new sounds, vocal styles, and song structuring pays off very well. One improvement upon his prior record can be noted in the form of his mixing ability, which accomplishes the feat of maintaining the gruff quality of Niagara while simultaneously sounding more balanced overall. In addition to this, redveil finds far more mature song progression on this album than on Niagara, as his tracks previously struggled to deviate from linearity or even reach the 2.5 minute mark. As improvements have been noted in nearly every aspect of redveil’s game with each release so far, I maintain the same level of excitement and anticipation for redveil and his next treads through his musical journey.