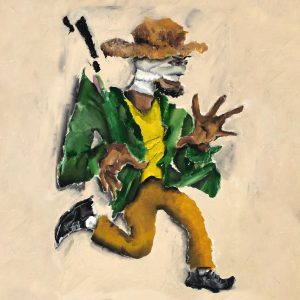 Birmingham, Alabama native Pink Siifu has been creating music since 2015, following the revelation that his poetry and rapping went hand in hand. Breaking through to larger success on the hip-hop scene around 2020, Siifu received major guest features on The Avalanches’ “Running Red Lights” and Slauson Malone’s “Off Me!.” My introduction to Pink Siifu’s music was 2021’s $mokebreak, a collaboration album with alternative rap artist Fly Anakin. On the project, the two rapped over clouded beats carrying a thick atmosphere. The album also featured guests on nearly every song. Pink Siifu’s style stood out from the crowd, with transforming flows and unique vocal delivery.

Pink Siifu’s GUMBO’! shocked me with how aptly Siifu turned on his heels in pursuit of a vastly different subgenre of hip-hop. Of course, this was before I heard 2020’s Negro, Siifu’s loud hip-hop/noise-rock crossover that would have made his versatility thoroughly clear from the beginning. Siifu’s newest record, GUMBO’! (DELUXE’!!), is a melting pot of musical styles, artists, and ideas.

GUMBO’! starts off easy with the smooth “Gumbo’! 4 tha Folks, Hold On.” The opener foreshadows the jazz-influenced, light-toned tracks to come later in the record with its pulsing drums and serenading vocals from Siifu himself. Here, Siifu pays homage to his roots, shouting out family members and dedicating the project to his hometown supporters. Following this, “Wayans Bros.” unravels “Gumbo’! 4 tha Folks, Hold On” with uncompromising bass and fire-spitting verses from Siifu and Peso Gordon. On “Roscoe!”, a more ludicrous beat manages to top that of “Wayans Bros.,” with the track’s insanity rising with every iteration of the siren-like melody. In these tracks, the lyrical subject matter ranges from opposition to law enforcement to self-assured confidence and Siifu being in his bag. Aside from more hard-hitting tracks, Siifu also delivers easygoing jazz/hip-hop crossover tracks on GUMBO’!.

Siifu slows things down a bit on “Fk U Mean/ Hold Me Dwn.” A highlight on the record, the track goes in a more mellow soul direction, with the bassline supporting the first segment. Siifu references traditional dishes of the south on the song, as well as his loathing for the racism rooted in much of America. Growing up in Birmingham, Siifu encountered racism in numerous aspects of his life; this is evident by many of the lyrical themes we receive on the record, seen previously on “Wayans Bros.” and later on “Scurrrrd”, as well as from Siifu as an artist, given projects like the resentful and enraged response to police brutality, Negro.

Pink Siifu loads banger after banger onto GUMBO’! (DELUXE’!!), with the distinctly layered “BRAVO’!” leading the way. Combining sharply rising bass, a simple yet effective melody line, sharp trap drums, and Turich Benjy’s unforgettable chorus, this one was a notable standout. The brief outro to the song previews another beat entirely, leaving me fiending for more from producer Lee Tensei. This one is lightning in a bottle.

The height of the jazz-tone cuts comes with “Call tha Bro (Tapped In),” which features the best verse I’ve ever heard from rapper Maxo (not to be confused with Houston’s Maxo Kream). Though most of the trap-infused parts of the album exude confidence, there’s no other point on the record that matches the level of self-assurance we see from Maxo’s verse on this track. One sample of his remarkable poise is in the line “I was 15 bagging bad bitches like a free throw, easy.” The same type of suave is paralleled in the production, with the sailing saxophone and the relaxed synth keys setting the assertive mood. Even with the sublime production, Maxo steals the show on this song. More smooth soul and jazz tracks that hit the mark come in the three-track run near the midpoint of the project: “Living Proof (Family),” “Scurrrrd,” and “SMILE (wit yo Gold)” (a callback to Siifu’s Slauson Malone feature). “Scurrrrd” is a free-floating ensemble of jazz elements, supervised by Big Rube’s deep-voiced narration. Every part of “Scurrrrd” feels integral not only to the song by itself, but also to the overall heart of GUMBO’! (DELUXE’!!).

Even the interludes on the record are a plus. The groovy-to-glitchy “Pink & Green, White & Gold” and the bouncy “4sho’7” strengthen the impact of the songs to follow them. The original GUMBO’! ending track “Play On’! Inshallah” eases the listener into the deluxe recordings. Sadly, the original version of the album does get slightly weaker towards the ending cuts, with songs like “lng hair dnt care” feeling needless and lacking in motivation. In addition to this, the track “Voicemails Uptown” starts off strong, but falls apart with the clunky beat switch. Pink Siifu’s vocals are also generally incomprehensible on the record, his slurry delivery clouding the enunciation of his words. This isn’t a huge problem to me, however, since this choice is more than likely part of the vision.

Pink Siifu leans far more into his trap-influenced style on the additional songs with tracks like the assertive “All Dat,” and collaboration with Turich Benjy on the uncompromising “SLOW’!!.” Altogether, the added tracks share the same impulse as the original tracks, but do not necessarily bring anything new to the table.

GUMBO’! (DELUXE’!!) is a tribute album, calling back to Pink Siifu’s origins and praising his musical and personal inspirations. The symbol of homemade gumbo represents the ingredients with which Siifu feels he was “made,” all of which add their unique flavor to his identity and the record as a whole. This is true not only in the musical styles evident in the album, such as the distinctly southern influence, but also in the actual creation of the project itself, featuring over 30 artists. Though it’s unclear which direction Pink Siifu will go in following GUMBO’!, I have trust in his creativity to develop another gem regardless of where it leads him.