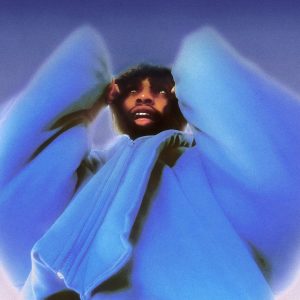 Florida rapper $NOT follows up 2020’s Beautiful Havoc with a project that wears its influences on its sleeves, its chest, and everywhere below the neck: Ethereal.

Ethereal was supported by the heater of a single “Doja,” which features a customary flaming verse from A$AP Rocky. Despite how hard the track goes, I can’t help but feel that “Doja” is just $NOT doing his best Comethazine impression (see Comethazine’s “Walk”). The song is good enough for me to look past this for the most part, but I feel that $NOT would still benefit from developing his own spin on this type of rap. A “misconstrued” lyric from the track caught the attention of Twitter when Doja Cat tweeted “You fucked who?,” referring to a line in the song originally thought to be “I fucked that bitch named Doja Cat.” $NOT corrected the lyric soon after Doja Cat’s tweet, stating that he just wanted to make a song hype enough for a mosh pit. Even then, $NOT’s lyric now reads as off-putting when compared to before, perhaps making things worse than if he had lied. Despite this misunderstanding, only music-related mishaps arise on the rest of Ethereal.

The opener “My World (Intro)” eases the listener into the record using minimal acoustic production, with $NOT letting us into his life as of recent. The track doesn’t have much going for it, however, as nothing interesting is presented in terms of $NOT’s delivery or the production. Other $NOT attempts that fall flat are “Fighting Me” and “high IQ,” the former of which sounds a lot like something Aminé would have included on last year’s TWOPOINTFIVE. “Fighting Me” has some of the worst vocals on the entire project, with $NOT’s delivery getting further and further out of pitch as he goes deeper into the chorus. Although “high IQ” isn’t as annoying as this track, the monotonous lyrics bear a heavier burden on my ears than does “Fighting Me.”

$NOT’s aggressive delivery on “Go” flashes his hunger, giving a taste of his true abilities as a rapper. Through slick double entendres (“If he not blood, then we leaving him crippled”) and ridiculous, exclusive Gen-Z lines (“She ride on my dick like it’s X Games mode” / “This a white bitch looking like Ms. Frizzle”), we clearly see $NOT’s technical rap capabilities, specifically his ear for impressive flows and taste for original references. The slow tune “BLUE MOON” returns to an acoustic sound, turning out much better than the first attempt “My World (intro).” Along with the lo-fi drums backing the guitar on the song, $NOT amplifies the rhythm with a delicate cadence through the chorus. His background vocals singing “Pretty lady, pretty lady” add a necessary flavor to the song, helping “BLUE MOON” achieve elite status on the record. This is all without mentioning the angelic feature performance from Teddi Jones, whose childlike voice has great chemistry with $NOT’s.

$NOT’s best performance on the record comes on “EYE EYE EYE,” where he teams up with Kevin Abstract to deliver a unique banger. Along with synths that cry out, echoing into oblivion, the unyielding drum pattern maintains the best beat on Ethereal. $NOT’s earworm chorus on the track is also by far the best on the project, translating the beat without effort. Kevin Abstract also returns the favor for $NOT’s feature verse on Kevin’s “SLUGGER” from last year, supplying a verse that gives $NOT a run for his money.

“5AM” is the first track to give a taste of the “ethereal” premise presented by the album title. This one landed very high for me initially, reminding me of the many Playboi Carti snippet remixes on YouTube (see “7AM”). Though some of the novelty has worn off of the track, I still find it very enjoyable because of $NOT’s try at floating on the already soaring beat. The cloud-rap track “ALONE” sounds tailor-made for Trippie Redd, who makes an appearance on the song, outshing $NOT. Despite Trippie’s great execution, the track sounds like it could have been fleshed out more. Along with the later track, “Euphoric”, $NOT appears to cater towards the sound of other rappers, rather than choosing to pursue a more unique style.

Ethereal falls short when $NOT clearly bites off of his contemporaries. Namely, this is seen in cuts like “BENZO,” which sounds like a far more dull version of “Flex Up” by Lil Yachty, and “How U Feel”, which sounds heavily inspired by Kanye West, specifically “Good Morning.” Other times on the project, general similarities can be drawn between $NOT and artists like Comethazine and Kenny Mason. Every artist takes inspiration to some extent from one place or another; however, it becomes a problem when it still shows in copious amounts after the finished product is released. $NOT definitely indicates his ability to develop his own prominent sound on Ethereal, but only does so in small spurts.