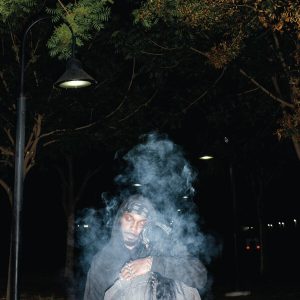 Though it’s been over two years since the last full-length release from JPEGMAFIA, he’s made sure to keep his fans well fed during this “break.” Even calling it a break may sound like an exaggeration, but for the high-output music-making method of JPEGMAFIA, it certainly seemed like one. LP! sees JPEGMAFIA mixing the styles of his previous four records as well as covering new ground. While most lyrical subjects remain consistent with the crusades against the alt-right and affinity for artillery of Veteran and All My Heroes Are Cornballs, LP! shows an increased sense of technical ability and flow throughout the vocal performances.

Releasing both an “ONLINE” and “OFFLINE” version of the album, it was difficult to decide which edition I should choose to review. Although the “OFFLINE” version was declared the “true” version by JPEGMAFIA himself, I decided to stick to the “ONLINE” edition that was released on streaming services.

The one single from the project, “TRUST!,” slowly but surely grew on me (as is typical with most JPEG songs). The soft, melodious bells and chimes play well in contrast to the hard-shelled delivery of the verses and chorus, which detail JPEG’s ability to smile through the conspiring figures he sees both in his inner circle and within the music industry. As an intro to the album, “TRUST!” gives a great illustration of what’s to come, with the extremely dense and layered production elements of his previous full-length record All My Heroes Are Cornballs taking the forefront. This is also exemplified on “ARE U HAPPY?;” with obscure vocal samples and conversations spliced into the song, this is only something JPEGMAFIA could create, but somehow still reminds me of something that could have been seen on The Internet’s first record Purple Naked Ladies. Though there’s a lot going on in “ARE U HAPPY?,” the elements of the song work harmoniously with one another to create an organized chaos effect.

The “thot” theme from Cornballs continues onto LP! with “THOT’S PRAYER!,” where JPEGMAFIA also continues the sonic themes seen on Cornballs and EP2! with the use of desperate, isolated autotune singing. Not out of character given his cover of Carly Rae Jepsen’s “Call Me Maybe,” JPEG takes the opportunity on this track to do a quick cover of Britney Spears’s “…Baby One More Time.” “WHAT KIND OF RAPPIN’ IS THIS?,” references the sound of EP2!, specifically tracks like “KELTEC!” and “FIX URSELF.” The high-pitched vocal sample of “More of You” by Fred Hammond demonstrates how great JPEGMAFIA is at flipping samples, with his unique ability to hear and rearrange the sample in a way that others never would have thought of.

“DIRTY!” is a grimy, shapeshifting banger that reminds me exactly why I love JPEGMAFIA; from the sharp melody line to the “get low!” chants in the middle of the song, this cut reminds me of the high points on Veteran. The slow as molasses southern hip-hop style that opens up the song paves the way for the remainder of the track to infect the listener’s ears. The dark chorus of deeply hollowed out drums gives an instrumental break halfway through the track: the production used in the first leg is freshened for another use to close out the song. The second verse is one of the better ones throughout the project, with slick double-entendres serving as a message to lame artists who continue to make the same songs over and over. JPEGMAFIA employs a rock/hip-hop crossover on the fantastically entertaining “END CREDITS!,” reminiscent of “Life’s Hard, Here’s a Song About Sorrel” off of Cornballs. Though no stranger to left-field production, this is certainly new ground even for JPEG.

“REBOUND!” and “OG!” provide more of the aggressive deliveries and moods, with the former boasting a DATPIFFMAFIA feature. The latter track is JPEGMAFIA’s take on the original “boom-bap” style of hip-hop. “OG!” references the boom-bap style, as well as DMX, who is sampled on the track. This one comes out sounding well-polished despite its gruff, beatboxing production. Playing similarly in tone to “OG!,” “NICE!” features a live recording with additional production layered on top of fierce call-and-response vocals between MC and audience. I largely fail to see how this one contributes to the album overall, given that it doesn’t even sound like JPEG rapping. It certainly does not detract from the project, however, considering that it’s hype and contains some of the more subtle production I’ve ever heard from JPEGMAFIA; the light, wobbling synth melody transcends the rest of the instrumental with further listens.

My favorite three-track run on the entire record comes with “DAM! DAM! DAM!,” “SICK, NERVOUS & BROKE!,” and “KISSY, FACE EMOJI!.” The three tracks take a sincere and intimate mood production-wise and vocally. The soft synth chords that open up “DAM! DAM! DAM!” are a great introduction to the more upbeat delivery of the rest of the song. This track has the most captivating flow overall, effortlessly maintaining the awareness of the listener from front to back. The waviest track on the project is undoubtedly “SICK, NERVOUS & BROKE!,” which switches back and forth smoothly between delightful and serious timbres. JPEGMAFIA expresses throughout the song “All my opps sick, tired, nervous, and broke / And they still take me as some j—;” this shows that, despite the headway that he’s made in the rap game, he is still not taken so seriously as he’d like to be.

From the ethereal instrumental to JPEG’s sweeping refrain in the chorus, “KISSY, FACE EMOJI!” is clearly inspired by JPEGMAFIA’s love for NSYNC, as is proven by his “Millenium Freestyle” cover. The rattling drum notes sporadically throughout the song provide a nice surprise and tonal twist to the cut. A collaboration with Tkay Maidza, “THE GHOST OF RANKING DREAD!,” provides a climactic ending to the record. The final track’s title references JPEGMAFIA’s love for the reggae group Ranking Dread and his experience listening to them with his father when he was growing up. It is notable that JPEGMAFIA references his father as a “ghost” in a line from “WHAT KIND OF RAPPIN’ IS THIS?,” as lyrics arise elsewhere in his music describing his father’s absence throughout much of his childhood. “THE GHOST OF RANKING DREAD!” serves as a backhanded recollection of this relationship with his dad: all that’s left of his father is the few memories he shares, thus painting his father as a ghost.

JPEG’s growing distrust of both his friends and major faces in the music industry (see “BMT!” and “TRUST”) comes up often throughout LP!. The main problem that I find with this project is the tracklist’s chemistry, or rather the lack thereof; LP! lacks a great sense of cohesion on the whole. Perhaps not all of the blame can be placed on JPEGMAFIA for this, along with the album’s release came a message from the rapper about his problems releasing LP! to the public as a result of his label holding him back. This likely played a large factor in the sequencing of the album and (as we now know given the two different versions) the tracks included and cut from the project. Individually, each one of the tracks falls somewhere between good and excellent; together, the sum of the parts comes short of adding up to the whole. Though LP! is a just-above-average project by JPEGMAFIA’s standards, it’s still a very good album overall.