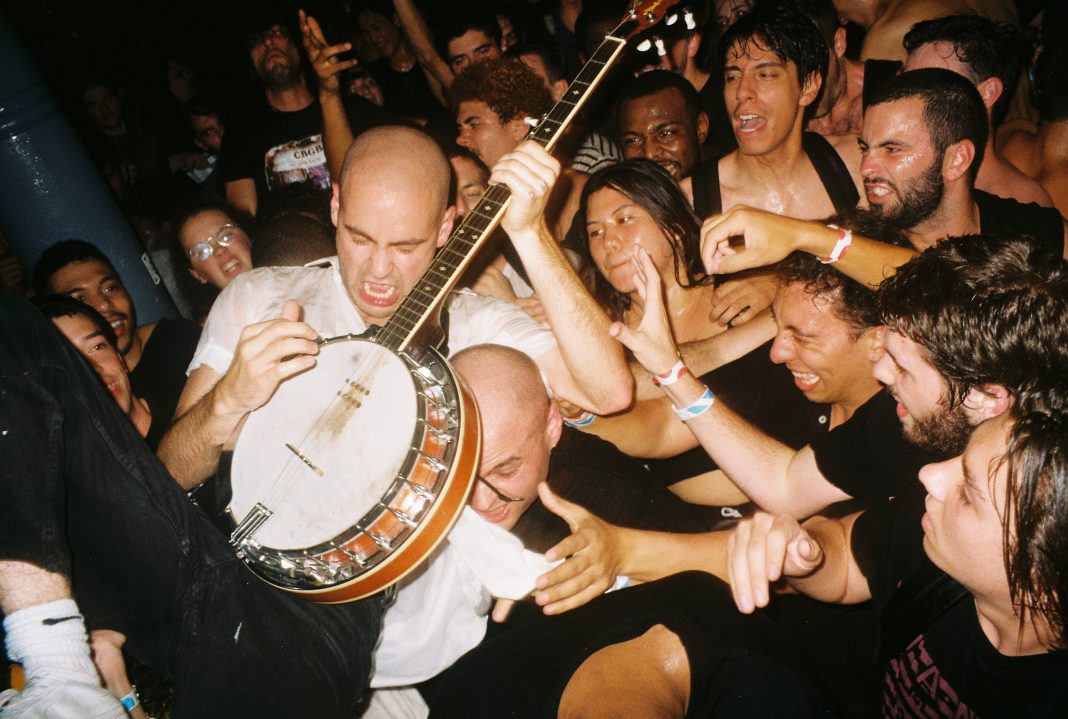 (This interview has been edited for clarity)

Daniel: Obviously you guys have a big DIY ethos when it comes to playing music; I mean, I just saw you outside before the show spray painting white t-shirts you bought from walmart to sell as merch. I know you guys also have a big appreciation for variety when it comes to the physical space as a part of your performance, from playing in museums, in tiny venues, playing outside, et cetera. How do you approach playing in all of these different spaces and do you thrive off of the crowd interaction?

Harlan: I think it’s a really important part of what we do; I mean, I think we like to pay attention to it before we just walk into a place and play it. We think about the bills that we’re on and the overall show that we’re helping to create.

Noah: I think that when possible it’s sick to play shows in unexpected places… Places that feel as cool to us playing them as does to someone who goes to the show, you know, it’s not somewhere that they’ve been a million times.

Julian: It’s also about, like, getting out of the club environment. You know, like, the bar, and the club, it’s not the apex of this culture. You know what i’m saying, it’s about the experience you have with other people. The center of what you do should not be the bar, or the club, or the “cool spot”. It’s like, the cool stuff happens when people come together.

Daniel: How did you guys grow up and what kind of effect did that have on your music?

Harlan: Well, I mean, we grew up together. I went to high school with Julian, and like, I don’t think we would’ve chilled if we didn’t play music together. I think the first conversation I had with Julian was about music.

Julian: Yeah, we had heard each other play and we were like… “you play, right?”.

Harlan: Yeah, and I mean, that was like a huge part of our upbringing too because that was the most fun thing to do when we weren’t in school. And then, yeah, we just kept doing it, you know. That was a major part of my growth.

Daniel: What did you guys play in before Show Me The Body, like what bands?

Harlan: I wasn’t in a band man, I joined Show Me The Body because I wanted to be in a band, and that’s been my band, you know.

Julian: I’ve been in a couple, whose names are literally too embarrassing. But the story that Harlan just described about how we bonded over music, that happened 11 years ago. We’ve been playing together for a very long time.

Daniel: What prompted your choice of gear? You know, the banjo, the rickenbacker, I guess this is more a question for Julian but what made you choose to play that instead of something more conventional?

Julian: My cousin went to college, he brought it back, it was sick. I thought it was simple and really cool. Once I figured out that I could put…

Daniel: A distortion pedal on it?

Julian: No I don’t use any pedals.

Julian: Nah I just go through the amp man.

Harlan: *smirking* I use the pedals.

Julian: But yeah when I figured out I could put a pickup in the banjo like that, it just took it to a whole other level.

Daniel: Cool man, are there any bands you’d want to give a shoutout to right now?

Daniel: Who are y’all playing with in Houston on Friday?

Harlan: A lot of people, man.

Daniel: Dope, well, that’s what I was gonna ask you about next. So like, what is CORPUS, if you had to give us a rundown. How did it start, what’s it about, all that type of stuff?

Julian: I guess like, CORPUS came about because we wanted to do more with people than just Show Me The Body. That’s really why we started doing that, because I feel like there were more opportunities that maybe came about because of Show Me The Body but we realized that a cooler way to go about doing it would be to start an entity that could be greater than just the three of us. We didn’t want to expand Show Me The Body because that’s still a very close-knit small community, you know what I mean? Like, we work on music with only one other person, and the three of us, nobody else. But CORPUS is like, a lot of individuals who we respect. It’s not very defined, but it’s basically all our friends. I mean we have friends that aren’t a part of CORPUS, but everyone that hustles with us, in New York, is a part of CORPUS.

Daniel: Right, so, as for the people in CORPUS, like TrippJones, Dog Breath, how did you guys meet them?

Julian: Just from playing shows. We met TrippJones, probably 3 or 4 years ago, in Richmond, Virginia with WIFIGAWD. WIFIGAWD was like, “yo, my homie’s from New York!” and I was like “who’s that?”, and yeah, Tripp was like “yeah, I’m from New York”. Yeah it was mad funny, and then we played that show with him. But yeah man we met Dog Breath playing shows. All of the musicians in CORPUS are just people we hold mutual respect for.

Daniel: So I know you guys wrote your new album Dog Whistle in New York, but you recorded it in LA. How was that? Did you guys like LA?

Julian: We have mixed feelings.

Harlan: Yeah. I like people from LA and I like playing in LA, but I don’t like living in LA. But recording in LA is sick, it was the best studio.

Daniel: Where did y’all record?

Harlan: A couple of places, Kingsize Sound and Sunset Sound.

Boaz: And The Village.

Harlan: Oh yeah and The Village. Yeah there were a few spaces we went to. But yeah LA is like the recording capital of the world you could say, the best stuff is out there. We worked with a great producer, and our friend Gabriel. It was a really excellent experience, we learned a lot.

Daniel: So, best crowds, craziest show experiences, anything like that?

Julian: Of this tour?

Daniel: Of any tour.

Harlan: I got my birthday sung to me in polish at a festival by like 2000 people, that was a highlight for me.

Julian: Yeah that was a cool crowd.

Harlan: Yeah, but this last tour has been the best US tour we’ve done in a long time.

Julian: Other tours have been very sporadic, you know, all the major cities go up, but like-

Daniel: Playing Nebraska or whatever is gonna be rougher

Julian: Yeah duh, which, you know, it probably still would be even if we did play Nebraska on this tour… Just to keep it a buck. But like, Detroit was not bad this time, Detroit was a good show. There were enough kids there that it was like a gnarly thing. Because like, we’ve played a couple shows in Detroit, and usually there’s a lot of space and not a lot of people. But yeah, this tour felt good.

Julian: Yeah it was fun man, it was a really good time.

Daniel: Yeah I saw the video Sunny from Hate5Six put out, looked like an insane show. Wasn’t it capped at like 1000 people or something?

Julian: No, no, maybe 1000 people showed up but it was only like 400 or 300 people in there. There wasn’t really a capacity, we just stuffed everyone in there, and then the cops showed up before we played and were like “this can’t happen”. Then we were like “let’s just play right now!”. So then we played, and the whole time the cops were like “you need to shut this down”, and my girlfriend, who is our manager, and also our co-founding partner in CORPUS, her name is Asha. She was doing door stuff and handling police, she was just like “I’m not shutting it down”. She talked to the police the whole time we played, she didn’t even get to watch the show.

Daniel: If you guys had to pull one person off the street and explain your music to them, how would you do it?

Julian: I don’t know, I probably wouldn’t do that man, it’s against the Jewish religion to prophetize.

Daniel: What are your favorite songs to play out of your whole roster?

Julian: Hmm, I like K-9 because everybody sings along. I like it when people sing along. But now it’s kinda changing though because we’re playing a lot of new songs, I mean, we’re playing the whole new album. Now kids are really singing along to-

Julian: Yeah, Forks and Knives too, but kids really sing along to Arcanum.

Daniel: Yeah that’s a good one. Have you guys put any thought into what you want to do in the future musically? I mean, I know you just put out Dog Whistle, are you just kicking back and taking a break now or?

Harlan: I mean we’re on tour and we play a lot-

Daniel: Even on tour?

Daniel: So have you guys discussed anything for the future?

Daniel: So you guys cook up stuff individually and then come together after tour and flesh it out?

Julian: Yeah, everything gets touched by everyone. It’s all collaborative. So like, to different degrees stuff will come in more fleshed out or less fleshed out, but no matter what everybody puts hands on it, and like, the best idea happens.

Harlan: I feel like I’ve seen a couple of sound guys on this tour rocking Daughters shirts.

Daniel: Yeah man I saw them a while back when they came through.

Julian: Oh yeah they just did a tour huh.

Daniel: Yeah man, anyway, thanks for the time I really appreciate it boys, enjoy your show!