When I first heard Toronto-based troubadour Orville Peck’s fantastic debut album Pony, I imagined the man singing in a hollow, cavernous saloon in the middle of the night. The Roadhouse from Twin Peaks felt like the ideal venue for Peck’s particular gloomy shade of lovestruck outlaw country and southern rock, especially after seeing his wonderfully stylized music videos. Titillated by the mysterious masked Canadian cowboy, I acted quickly on the chance to see him perform at the South Side Music Hall in downtown Dallas. While what was presented that night subverted my expectations, but I am just as excited to report my findings.

On the way to South Side Music Hall, I asked my friend who the opener was going to be. She read off the event page; Boulevards, tagged with “funk,” “hip-hop,” and “electronic.” After witnessing the trio live, I’d say those last two were quite a stretch. Boulevards were essentially a mawkish funk rock group, sometimes obnoxiously heavy-handed with wah-wah guitar and derivative audience callbacks. The music itself didn’t turn me off; in fact, I found it to be quite joyous and frenetic. It’s the performance that made Boulevards feel so out of place that night. Too often, hands on stage rose with fingers curling, begging the audience to cheer; too often, the frontman pleaded for the crowd to repeat “HEY” or “oOA OoA” or “AAAAAA” back at him. Desperate for audible responses, he would convulse violently towards the drummer, or hold his microphone over the guitarist hammering out a Guitar-Hero-III-Legends-of-Rock star-power solo. This aggravating plea for affirmation, coupled with the trio’s lack of live bass and command of the large South Side stage, flustered me, anxious to see if Orville would make up for his lackluster opening act. Orville and his band felt no need to ask for the audience’s adoration: his soaring, Elvis-like croon immediately locked us into his aural gaze. I expected, based on what I had heard and seen online, to experience a smoky, hushed performance against an empty, chilly tavern. To my surprise, Peck astounded the crowd with boisterous dances, gestures, and banter, and his personality leaped far beyond the mask. Through his performance and his active relationship with the listeners, he felt effortlessly suave. With only one 11-track album, Peck and the gang got creative to extend the night’s setlist. Despite perhaps excelling best at subtle, vast ballads, the group revitalized three upbeat country and bluegrass classics, from Emmylou Harris to the Dixie Chicks. No matter the material, Orville’s stage presence consistently impressed me for reasons opposite of what I expected. Instead of maintaining an allure of aloofness and mythos, he greeted us like a bonafide star. He often remarked that it was his first time in Dallas, though his presence (as well as the audience he attracted) could’ve fooled anyone. The set flew by, and after a few songs, I forgot he had the mask on. 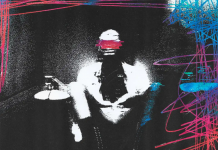