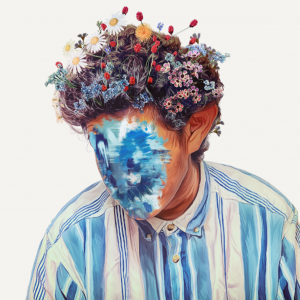 In heaven there is a factory. This factory is impossibly large, stretching far and wide among the clouds, built with millions and millions of identical white bricks, and full of angels toiling on white conveyor belts in white smocks, white trousers, white hats, and white faces eternally sheltered from the sun. This factory is for art in all its forms. There’s a Painting Wing, a Sculpture Wing, a Theatre Wing, a Film Wing, a Literature Wing, a Multimedia corridor (still in the progress of expansion), and of course, a Music Floor. The Music Floor is complex and constantly in motion, its belts and machines and shelves arranged into more intersections than a crossword puzzle. The angels have never been exactly sure why they’re here or what exactly they’re doing, and God won’t tell them. God lives on the top floor, in a small white room with a typewriter. God is a man (straight and white, undoubtedly) who creates all art and distributes it across the current living population of his little planet. He never stops typing; each page is one work of art that enters a chute system and travels to its appropriate wing once its last line is inked.

Today the Music Floor received a page that sparked an unusual disturbance. God has been taking risks with the edgelord shit over the past few years but this particular page put one angel past their limit. This angel–let’s call them Ben just for grammatical purposes, even though the angels don’t have names or genders in this canon–broke a pattern of movement and work that lasted for millions of years. Ben initially froze, gobsmacked by the impossibly distasteful prose. “This came from the Father? The Alpha and Omega? The all-powerful I AM?” they thought, their face turning an unforeseen shade of crimson.

God caught this deviance immediately. For the first time since creation, he emerged from his small white room and apparated directly beside Ben. “What is the matter,” he inquired, uncharacteristically frustrated. “What the hell is this abomination? We’re supposed to be responsible for this?” Ben asked, alarm and breathlessness in their voice. “Yes,” the Lord answered matter-of-factly. “Look, there’s this kid in Sacramento he’s just desperate to have something take off. This is just what makes sense for him. Name’s Frank. Guy’s a piece of work. Any other project released under his name just wouldn’t align with Earthly logic.”

“But it says here his name isn’t Frank,” Ben replied. “It says Hobo here. You realize that’s been considered a slur to most of America since like 2012?”

“Ben, I’m fucking God,” he boomed. “Of course I know. Listen, this can’t change. These people have free will; the cards are in their hands and I have to work with what they give me. Yes, Frank is corny, culturally short-sighted, and inconceivably irritating. This is just the precise album that his personality and ethos demand.”

“What do you mean things can’t change? We’ve shelved things before,” Ben exhaled, pointing at Dr. Dre’s Detox on the wall behind them.

“That’s different,” the Father exclaimed, visibly more uncomfortable. “This kid is determined. If this project fails, he’s just going to whine for another 40 minutes over needlessly zealous pop rap instrumentals with the same melodramatic slam-poet flow. It’s going to get made no matter what I do.”

“That sounds very un-omnipotent of you,” Ben remarked, their eyebrow rising as their pale complexion returned. “Look at this skit, ‘You & The Cockroach.’ Are you trying to slander yourself?”

“Look, sometimes this life and world I’ve created just sucks and feels doomed. Humans are so dumb and I just wanted to encapsulate that by comparing them to bugs.”

“Right… but did it really need the call and response bits?”

“Sometimes I wish the crowd was on the same page as I am.”

“And you directly implied here that you approve of Donald Trump because his fingers look like a meat that you like.”

“I know he’s a shitty president but he makes for some great memes, ok.”

Ben bit their lip. “And this track ‘Uglykid,” like are we supposed to feel bad for this guy? He sounds like a sheltered redditor on ecstasy.”

“Hey, Reddit is a productive community that’s done some unprecedented things. More than Tumblr ever did.” It became clear that the Holy Spirit was the Evangelical prototype after all.

The Father snatched the wrinkled white page from the angel. “Look, if you won’t make this like you’re supposed to, than I will.” He stomped off, sweating and appearing less like his wise eternal self than ever before.

“At least change up the flow a little bit! The cadence is the exact same track after track!” Ben yelled after him, feeling more cavalier coming out of the exchange than they expected. They returned to their work, piecing together the new Grimes album or whatever the hell. God clenched his prized work in his skinny white fist as he rose back up to his tiny white room and murmured, “I just want a dog.”