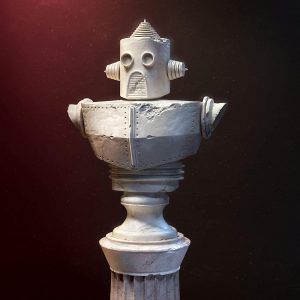 As they have gone along, Caravan Palace’s signature electro swing style leans more and more to the electro than the swing side. The French band has been well known for their swinging dance tunes, and a wack music video for their single Lone Digger. But in their new album Chronologic, the swing feels almost like an afterthought, or a hidden gem within the electro sound. Whereas previous albums featured old school jazz instrumentation and static, Chronologic sounds more like electro with a side of swing, or a swing for the modern age.

The overall tone of the album is more mellowed out than previous albums, with a mix of chilled out tunes and songs for the club. This is achieved by an instrumentation change and clearer vocals. The vocals of previous tracks can best be summed up by a youtube comment on one of their old videos, “Caravan palace, the only band whose lyrics are incomprehensible but still straight fire”. But now, the vocals sound crystal clear in comparison.  Both the lyrics and sound evoke the feeling of listening to pop tunes of the day, as opposed to an electro version of the 40’s. The general instrumentation of the songs also steer the tunes in a more electro direction, with the classic trumpet and saxophone being less utilized, and in a milder tone. The piano and guitar take precedence along with the electric sounds, leaving the rhythm itself to remind you that this is still swing in some form. The older jazz sounds that were so prevalent in previous albums pop up in the beginnings of songs and in the background, as if they were hidden easter eggs, only audible if you’re looking for it.

That’s not to say that the album is bad at all, just different. One of the best songs to exemplify the sound of “electro with a side of swing” is About You feat. Charles X. While the sax, trombone, and trumpet feature in the beginning and throughout the song, its vocals and electronic main back track are the feature here. The swing rhythm itself is driven by an electronic bass rather than a sax or trumpet, and combines with the lyrics to deliver the feeling of independence, exemplified by the lyric “I don’t give a damn, I don’t give a damn about you”. The sax and trumpet hits in tandem with the electro bass provide the new hybrid of electro swing that prevails throughout the album.

Overall, Caravan Palace’s Chronologic feels like a semi-evolution, like they tried to go full electro but still had swing in their soul. They explore different emotions than they have before, and this foray into the electronic side is a great progression of their music. Their newly clear vocals provide an augmentation to the carefree and thoughtful mood evoked by the album, and their music videos are still wack as all heck. Listen and dance to Chronologic, the perfect excuse to listen to Caravan Palace, as well as go back and listen to the progression of their sound … in chronological order.

If you don’t own a cassette tape player, do not worry, all other formats are easy to find via the link in bio. CHRONOLOGIC is out on Aug 30th MMXIX #cassette #cassettetape #chronologic #caravanpalace #newalbum2019