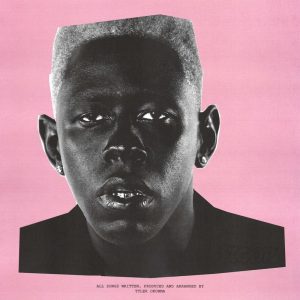 Since his first mixtape in 2009, Tyler, the Creator has climbed up the towering ladder of the music industry through clothing lines, tv shows, and his constantly evolving music. Flash forward to 2019, where Tyler has released his latest project titled IGOR.

Prior to the album’s release, Tyler posted a statement on Instagram giving his two cents on how the album should be approached and experienced. He suggested that listeners should listen to it all the way through in one go, with no distractions. Additionally, he warned fans to not expect a rap album, as this project was different from what fans have heard before. Locking myself in my room with my headphones on, I took his advice and experienced the beautiful, melodic rollercoaster that is IGOR. IGOR’s story is the all-so-familiar tale of love, complications, and heartbreak. The story features Tyler’s latest character, IGOR, who goes through a rollercoaster of emotions as he is faced with a toxic and unhealthy relationship. He falls in love with a guy who has an attraction to another person, forming an odd love triangle of sorts. Each track takes listeners through each stage of this ballad of lovesickness. From the first stages of love in “EARFQUAKE” to the post-relationship grief of “I DON’T LOVE YOU ANYMORE”, Tyler takes us through a relationship stemmed from unhealthy thoughts.

The album has a decent number of features throughout its 12 tracks. What sets the album apart from other guest-filled projects is Tyler’s unique use of the guest artists. Although the record contains several well renowned artists, they are not listed on the tracks themselves. To add to this, the artists’ voices are often distorted and sometimes hardly distinguishable. There were some obvious guests with their own verses such as Kanye West and Playboi Carti, but most of the features such as Solange had very subtle contributions. Some voices are so difficult to distinguish that many mistakenly thought that Frank Ocean was featured on “RUNNING OUT OF TIME“, which Tyler quickly debunked on social media. Keeping the artist’s names on the down-low lets each artist contribute a variety of voices to the album without taking the focus off of the production value.

Speaking of production, IGOR’s production is definitely the record’s strongest point as it showcases Tyler’s skills as a producer and song writer. The dreamy, melodic vibes of Tyler’s production create an immersive experience, taking the listener through a flurry of emotions and moods.

There are some points in the album where the production sounded a bit messy and overwhelming as many different sounds are blended together at once, but it doesn’t denounce the artistic appeal of the album as a whole. Additionally, it was often hard to tell when a song ended because of Igor’s abundance of beat switches, making some tracks awkward to listen to on their own. But this is to be expected as the album is meant to be listened to as a whole.

Only the second track of the album, “EARFQUAKE” is one of the major highlights of IGOR. It showcases Tyler’s talent as a singer, as he provides most of the vocals for the track. His voice varies in tone throughout the song from the high-pitched, soulful chorus to the deeper, more familiar closing verse. In addition, the track features a verse from Playboi Carti that adds even more variety to the track, without disrupting its cohesion.

“WHAT’S GOOD” is definitely one of my favorite tracks off of the record, as it filled with rap verses that the majority of the record lacks. In this track, Tyler shows listeners that he hasn’t lost his touch when it comes to spitting a few verses. “WHAT’S GOOD” includes an intense bass along with gentler synths and piano that alternate throughout the track. The ability to incorporate polarizing moods while keeping consistency shows just how far Tyler has come as a producer. Overall, this track should please old and new fans alike, as the song exhibits aspects of Tyler’s previous works accompanied by his newer style.

As Tyler had warned in his Instagram post, Igor has a noticeable lack of rap verses within most of its tracks. This, however, doesn’t impair its quality as Tyler proves that his music can speak a thousand words on its own. Even as a rap fan, I was blown away by the album’s production to the point where I didn’t mind the scarcity of raps. Furthermore, Tyler has publicly admitted that he never wanted to be labeled as a rapper and that he wanted to sing but found that his voice wasn’t fit for it. But IGOR shows that Tyler was able to overcome that sentiment and show the world his immense talent as a vocalist. All of Tyler’s previous projects exhibited his lyrical ability, while IGOR focused on Tyler’s proficiency as a producer. Tyler, the Creator’s production on this album is truly the pinnacle of his career so far.

IGOR has provided the world with a new chapter in Tyler’s evolution as an artist. The album shows an abundance of maturity and growth from the artist’s edgy, purposefully offensive Odd Future days. As Tyler had said from the aforementioned social media post, “This is not Bastard. This is not Goblin. This is not Wolf. This is not Cherry Bomb. This is not Flower Boy. This is Igor”. And to our delight, he was absolutely correct.