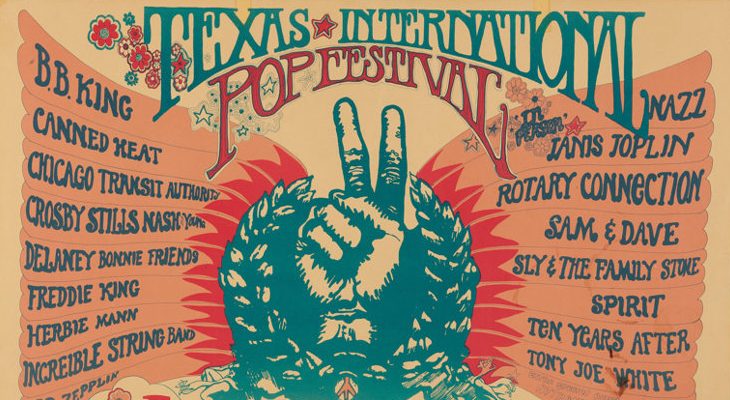 I found out about the Texas International Pop Festival by accident thanks to a series of connected coincidences that began occurring in 1999. Thanks to stations like VH1 and MTV celebrating the thirtieth anniversary of Woodstock, 1999 ended with a newfound affinity to 1960s rock and roll/counterculture/psychedelic acts like Janis Joplin, Sweetwater, and Richie Havens. Fast forward three years to my freshman year of high school. We each had to choose a decade to research and create a project about. Naturally, I chose the 1960s and started reading as many books as I could about the decade. In one, Ellis Amburn’s Pearl: The Obsessions and Passions of Janis Joplin, I found out that Janis Joplin had visited Lewisville, Texas to perform at a festival two weeks after she performed at Woodstock.

It was called the Texas International Pop Festival.

Even though I read about the Texas International Pop Festival in a book, when I began asking people—many of whom had lived in Lewisville for most or all of their lives like I had and whose families had lived there for decades—no one else had heard of it.
I began to wonder if it was a typo and Amburn meant Louisville (as in one of the largest cities in Kentucky) instead of Lewisville (as in a very conservative town that eventually became a very conservative suburb in Texas) and just spelled the city’s name wrong. It would continue to feel like a myth until people started sharing their experiences online and publications like Dallas Observer would publish an article about it to commemorate a major anniversary.

Even today, I still cannot believe that something like that could happen in a town like Lewisville. Whether a small farming community, the rural town that formed, incorporated, and grew exponentially as the latest transportation advances finally made their way down south, or the large suburb it became, it is almost impossible to envision a large number of hippies congregating in a place like Lewisville to watch as Janis Joplin and others came to Lewisville’s outskirts and played at a Woodstockesque festival during Labor Day Weekend at the now-defunct Dallas International Speedway that brought more people in one weekend than had probably ever lived in the town to that point combined.

Angus Wynne III, son of Six Flags Over Texas developer Angus Wynne Jr., was inspired by the Atlanta Pop Festival and wanted to bring something like that to North Texas. He managed to do so without incident until residents saw footage from Woodstock, learned something like that was happening in Lewisville, and began to freak out. By then, however, it was too late to cancel the event since Wynne and his partners had gotten the necessary permits needed to hold the event at the old Dallas International Speedway (now close to the DCTA’s Hebron Station). Two weeks after Woodstock, anywhere between 50,000 and 250,000 people converged on Lewisville to enjoy what some called The Woodstock of the South, where newer groups such as Led Zeppelin (announced as “The Led Zeppelin”), Chicago (then known as the Chicago Transit Authority), established rock acts like Sweetwater, Joplin, and Santana, and other acts like Herbie Mann, B.B. King, and Freddie King performed between 4 pm to late at night for each of the three days.

But just like that, it was over, and except a smattering of newspaper articles and random internet posts, little about the festival was known or shared. It remained mostly forgotten until the early 2010s. The internet and social media sites like Facebook allowed festival-goers and those interested about it to connect and share their accounts. Then, a group got together and was able to get a Texas Historical Commission marker commemorating the festival erected at the Hebron Station.

And now, in commemoration of the fiftieth anniversary, a second Texas International Pop Festival, will happen from August 30-September 1. That Saturday and Sunday, a two-day concert will happen and will include acts like Grand Funk Railroad and Chicago, who played at the original festival, along with Texan acts like Sarah Jaffe and Bombasta.

Listen to something old/something new Tuesdays from 6-9 on Radio UTD.