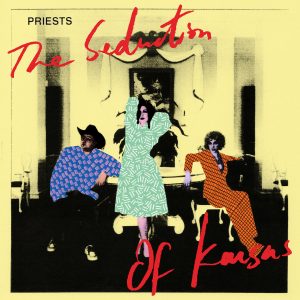 Priests is a band that often suffers the unfortunate fate of being categorized — made out to be definitively “punk” or “post-punk” or “political” — a fate that does no justice to the versatility and depth of the group’s work. Listen to 2014’s EP Bodies and Control and Money and Power and you might draw one conclusion about the band, but listen to their 2017 debut album Nothing Feels Natural and you might think something completely different. Unsurprisingly, then, Priests has followed this trend of unpredictability by redefining their sound again on their latest release The Seduction of Kansas.

The shift away from the sound of Nothing Feels Natural makes sense for a number of reasons. For one, the band endured the departure of bassist Taylor Mulitz, who opted in 2017 to focus his attention on Flasher, Mulitz’s other group. For a band so fiercely DIY to the point of running their own label (Sister Polygon Records), the loss of a member who had helped define Priests’ initial success nearly tore the remaining trio apart. Faced with the prospect of mending interpersonal relationships, the band also linked up with John Congleton, based right here in Dallas with hefty production credits comprising St. Vincent, Swans, Angel Olsen, and Xiu Xiu, among others.

The record opens strong with the forceful but melodic “Jesus’ Son,” perhaps the song most closely tied to the sound of Nothing Feels Natural, propelled by guitarist G.L Jaguar, before transitioning to the title track and first song from the album to be released. “The Seduction of Kansas” features smooth vocals from Katie Alice Greer and lyrics evoking a scene both uniquely Midwestern and somehow also universal. The song, with its upbeat pace, provides the exceptional experience of being able to dance to lyrics about “White Castle, Pizza Hut, and even Applebee’s” followed immediately by a reference to the Koch brothers — an experience that I highly recommend. “YouTube Sartre” finds Greer musing about amateur philosophers before closing out with “We’re hell in a handbasket, aren’t we?” Priests seem to confirm this rhetorical question later on by highlighting infamous Texas Congressman Charlie Wilson in “Good Time Charlie” (supposedly inspired by a viewing of the film Charlie Wilson’s War). The song remains a high point of the album, showcasing the musical strengths of the trio as a whole that blend together in flawless cohesion.

Every song on the record is packed with layers of emotion and meaning, practically begging to listen repeatedly and discover even subtler nuances each time. Perhaps the ones that ring most true are the more personal “Not Perceived” (sadly excluded from the album’s vinyl release) and “Interlude: I Dream This Dream in Which My Body Is My Own.” The former speaks of a desire to be free of the gaze of outsiders and gain complete privacy with lines like “Keep your eyes closed, parts of my soul your vision cannot go” and “I’m uneasy about anything that might perceive me.” I found myself deeply connecting to these sentiments. The latter finds Greer speaking prose over a soft instrumental track — more reflective and intimate in tone than the similar “No Big Bang” from Nothing Feels Natural.

Themes of the album range from Americana to one’s relationship with the self, with musings about American society, the corrupt forces that make it run, people who misinterpret and obscure discourse, and personal anxieties that inevitably plague anyone trying to navigate such a society with any semblance of higher conscience. The Seduction of Kansas closes out with the gentle melody of “Texas Instruments,” which turns the band’s attention back to “the hubris of propriety” and leaves listeners with a lyrical powerhouse of an album. By now, it ought to be clear that Priests is a band that defies categorization, occupying their oft-used descriptors at times while rejecting them completely at others. The Seduction of Kansas takes on many identities, just as Priests does, and exploring it deeper is as rewarding as simply dancing along.