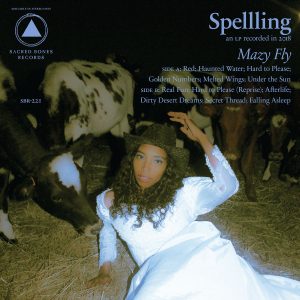 As of late, a good deal of modern indie music is focused on aesthetics- replacing musicality and artistry with personality and character. The latest album from Oakland based music project SPELLLING, Mazy Fly, proves this is no dichotomy or sacrifice, and that a piece of music can do both. Combining artistry and aesthetics through uniquely crafted atmospheres and unapologetic experimentation, Chrystia Cabral takes the form of a specter, witch, alien, magician, and finally herself to tell 12 different stories across the length of the album. Each track unravels and evolves like a narrative, with emotional highs and lows and changing moods; all of them warping and flowing without losing the ingenuity that forms them in the first place.

The progressions of each song, looking technically, are less cohesive and not organized as most songs typically are. Without choruses to structure most songs, or any defining circulation of differing individual segments, the songs could feel unnatural and thrown together. However, each song flows seamlessly within themselves, in such a gorgeous and ornate way that delivers a feeling of surprise that a song has come to an end, or ended in the way it did. Many songs such as “Secret Thread” and “Hard to Please (Reprise)” feature phenomenal builds, beginning with tender synths and ending with industrial guitar chords and crashing percussion. These builds and progressions are exhilarating, taking the listener on a mystical journey within just a few minutes.

The instrumentation is somewhat special, and though saxophones and synths seem moreso commonplace nowadays in indie music, the way Cabral utilizes these instruments crafts a unique sonic experience. Fluttering synths and ambient touches craft soundscapes that are both parts engaging and apocalyptic. The spooky, stumbling synth line in “Haunted Water” layered over the moaning, ambient vocals creates an unsettling environment- perfect to represent the tracks intended story and meaning. The use of saxophone throughout the album shows incredible versatility, like on “Afterlife” where it is delicately laced throughout the background of the track, acting as decoration rather than a driving melody. In “Secret Thread,” the saxophone is used as a deep, eerily droning bellow that emphasizes the songs catharsis. The saxophone is also tied into the lyrical content of the song, as the line that introduces the sax is “my shadow zone, at the bottom of a saxophone.” Something else that makes this album so phenomenal is that most songs are based around a single loop or chord progression- though you might never know it. The ways the songs evolve and unfold give them such immense depth and levels, not covering up but rather embracing the fact that the skeleton of the song is composed of only one progression.

Listen here to an example of a track with a phenomenal, evolving progression.

Cabral’s vocal performance is just as outstanding as the instrumentation. On most songs, she uses her vocals to fill the background as much as she does the foreground. Between ethereal, tender singing and eerie wailing, the album features the phenomenal versatility of Cabral’s voice. The track “Afterlife” features quick jumps from precise and soft falsetto to a strongly sung vocal line. Every track features gorgeous harmonies, instantly creating an enchanting environment and filling it to the brim with character. She uses her voice almost as instrumentation throughout every track, layering harmony on top of harmony until the song feels mystical and captivating (a great example of this is the very end of “Under the Sun,” which you can watch the video for below).

The lyrical content is another strong point of the album, illustrating numerous magical and haunting landscapes in order to convey emotions and metaphors. The track “Golden Numbers” has a dreamy, back and forth melody that imitates the feeling of falling through a literal and metaphorical spiral, holding onto objective truths in order to stay afloat and not descend further. This and many other tracks utilize phenomenal word painting- another great example being the song “Afterlife,” where a “garden of voices” grows, matching the actual building of voices in the background of the song. (I heavily encourage fans of the album to read through the track by track interview to get a more in depth look to the songs that aren’t directly mentioned in this review.)

On Mazy Fly, SPELLLING crafted a world that wistfully floats high above this one, equal parts dreamy and nightmarish. The ability to invoke a feeling that is unique and mystical, yet simultaneously so familiar and consoling is a definitive indicator of an outstanding piece of art. The layers of complexity within each song are crafted by the spiritual themes through eerie lyricism, shimmering instrumentation, and the heart-pounding progressions and songwriting that captivate you- not releasing you from its hold until the last second in which you are loosed into a free-fall of catharsis and wonder.

Watch the enchanting “Under the Sun” video here: