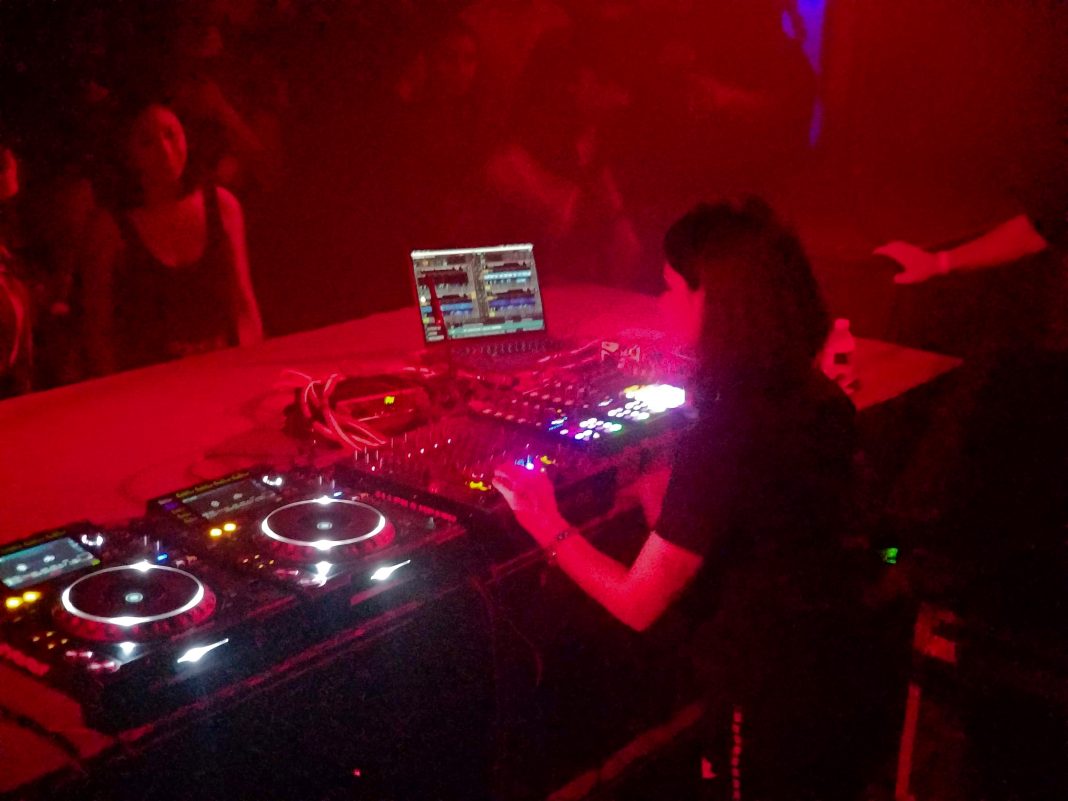 Getting to Techno Bunker is at first a bit of a weird experience. It’s in an industrial park about 17 minutes west from UTD on Walnut Hill Lane. There’s a gate code to get into the park, and then you drive most of the way into it to arrive at a one story office space that has been fit with speakers, a bar, and rave lighting. There’s rarely a large line, as the concerts last up to 6 hours, so only a few people arrive at any given time. You show your ticket, get a wristband, and then go through a short, narrow hallway, turn the corner, and boom. When you first get in, it takes your eyes a few seconds to adjust and pick out details. When I got there, around midnight, local DJ Cat was manning the decks. She was throwing out some nice melodic techno mixed with those heavy, building-shaking bass moments. The crowd was already at around 80 people, and everyone was vibing with what she was doing. Some people were taking advantage of the somewhat sparse crowd to do some flow style dancing, which is always really fun to watch. Techno Bunker’s resident, Prototype, came on around 12:30. His sets rely on heavy, sort of minimal style techno that sonically whacks you upside the head repeatedly. Minimal techno at 90 or 100 decibels not only demands your attention, but fully rewards it. It was about 30 minutes into his set when I realized wearing 5” heels was a mistake. Turns out they’re really hard to dance in, and you cannot help but dance to Prototype sets. Thankfully, I brought a change of shoes, so I ran out to the car, switched in, and let loose. The crowd was growing, filling the room, and everyone was having a great time. Around 2:00, Rebekah first came on, mainly on the drum machine. She slowly built a stream of percussion that just flowed in with Prototype’s picks. A few minutes later, Prototype relinquished the decks to the applause of everyone. Rebekah stepped up, and let loose. She does what are called “hybrid sets,” or sets that combine both traditional mixing with live elements, such as the drum machine. Her control of the percussion let her shape a set that was always driving, never losing momentum, and everyone was feeling the energy.

One of the best parts of live music, and especially EDM, is the other people. Everyone decides to come out, have a good time, and potentially get smashed. Aside from the odd creepy dude, it’s a judgement free zone. One of my favorite parts of any night, is stepping outside, and taking a break. The music finally drops to a safe volume, and you can talk with everyone. I met people who had come out from New Orleans and New York. This weekend it was in the 40s, so few stayed out there long, which I can’t really complain about, because spending time indoors was hardly a curse.

As the night went on, the building became almost completely packed. Rebekah kept the crowd under her sway, forming a mass of swaying bodies. There was respite in the back, where glovers did their thing, and one guy even found space to juggle. The night flowed on, time seemed almost fake, as if it had switched out for a cycle of building and releasing energy, layering synths on synths on drums on drums on drums. Rebekah didn’t give people a minute’s break, but why would you need a break from Rebekah’s sheer mass of sound?

Eventually, the night ended, the lights came on, and people trickled out. Techno Bunker is quickly cementing itself as my favorite Dallas club. Rebekah only booked three shows this tour in America, and Dallas is one of them thanks to those guys. It’s an authentic, underground experience completely free of pretense. The crew and bookings are tight, and the venue is a completely unique vibe.