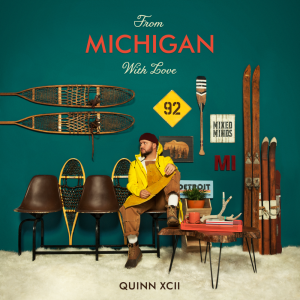 As most people know, expressing one’s emotional struggles can be a rough and lonely expedition. Additionally, being a man with the surrounding stigma that bottling up emotions is the only route presents many problems. From Michigan With Love delves into the pain and ultimate trueness of what it is like to live your life with anxiety and other mental health issues. This being Quinn’s third album, there should be a lot of hype surrounding his latest release. I will say, he did not disappoint. Although the issue regarding lack of mental health expression is not the sole message of the album itself, it is one aspect that Quinn feels is pertinent to both his fan base and himself to have expressed in his music, as many of us face similar difficulties in our own lives.

Compared to his last release The Story of Us, Quinn’s greatest talent is his story telling ability through his music. Although each track doesn’t go in any sequential order, the songs all have personal relevance to Quinn. In his previous music, Quinn mainly produced pop ballad love songs, and while the are still a couple similar sounds on this album, the newest release branches away from that to deliver a new Quinn that we haven’t heard before.

Quinn classifies his music as “melting pop”, a play on the mixture of cultures that boil into the melting pot. Stylistically the album has a mix of songs, such as “Sad Still” which invokes a sense of uneasiness as the beats abruptly changes from a steady flow to pounding drums similar to that of what its like to experience an anxiety attack. One moment it’s soothing, then it quickly changes to an almost offbeat barrage of word play. Another song in particular, “U and Us,” was unlike and Quinn song I had heard before. Without many moving parts and layers of voices, it was just Quinn, a guitar, and a light bass line. It was refreshing to listen too as the chords of the guitar echoed below his voice confessing why his love should be deserved and the faults in him. Although he’s never been a fan of using other artists songs, Quinn made an exception on the track “Life Must Go On” as it was written and given to him by one of his most revered artists, Jon Bellion. The two artists have a similar style that blends different pop and R&B genres into their very own style.

One thing that I love about this album is how relatable virtually all of the songs are, with familiar topics such as unrequited love, not knowing what the future holds, and the difficulties of living with anxiety. Quinn really understands how to connect with his fans by continuously speaking on these subjects and giving references that we can all get behind. In his song “Tough,” Quinn’s line about seeing guys in the gym who are jacked up beyond recognition often hide behind a mask, he says “Why are you only vulnerable when no one’s around? Your gym membership is not a crown.” Great play on words here by Quinn, but even more important is the message he gets across in saying that covering up our own issues with certain factors isn’t fooling anyone at all.

Quinn’s openness about expressing his troubles speaks volumes to how courageous he is to admit that he feels differently than most people. Seeing an artist feel comfortable in a situation like that makes it less taboo for everyone else to talk about it. It helps us realize that even some of the most successful people deal with the same struggles we do. In my opinion that’s truly what the album is about, being able to realize that talking about your mental health doesn’t make you a weak person, rather it emphasizes a path to better understanding of “why”.

In its totality, From Michigan With Love accomplished something that many artists don’t have the courage to do. The message of mental health awareness is brought up in a way that highlights the truth of the battle while also providing a positive outlook at the road to come.