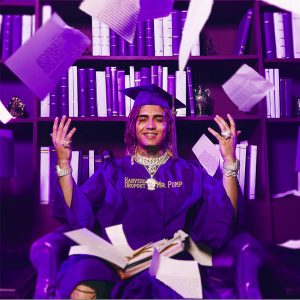 After a long wait, heavily anticipated sophomore album from Lil Pump Harverd Dropout is finally here. I must say- it was about as much as I expected from the SoundCloud “King of Rap”. Regarding the controversy coming from the fact that the album that was supposed to be out in mid-August of last year, Lil Pump was supposedly set back due to “losing the album.” Six months later, I guess he found it, but it was probably best if it had stayed lost.

The album itself is around 38 minutes long and, compared to his first album released, this is not much of an upgrade. It was to be expected that the majority of the songs would be in what I would call “ignorant rap”; verses that really lack substance and focus on repetitive lyrics that are meant to be shout at the top of your lungs like “Gucci Gang”. Similar styles on the new album can be heard in tracks such as “Vroom Vroom Vroom” and “Racks on Racks,” each of which are just hype songs without any depth.

The incorrect spelling of the name might have been the cleverest thing that Lil Pump did on this album. In his first song “Drop Out”, Lil Pump brags about the riches he earned from dropping out of school, the women he gets, and the drugs he does or did while he was still in school at the time. Just as one would think the majority of the lyrics are in the name of the song, a lack of lyricism is apparent and the message he wants everyone to know is that he didn’t need school to reach the “top”. However, the funniest part of the song is the very last verse, which states, “by the way kids, stay in school”. The irony of this is unmatched to anything else as he tells his fans to not be like him.

Undoubtedly, the best songs on the album are the ones with features from artists like Quavo, Lil Wayne, Lil Uzi Vert and more as they step in to help out 18-year-old Lil Pump. That fact to me is often overlooked; Lil Pump is still extremely young and there may be hope that his music will grow up along with him. For now, that is not looking to be the case. In the song, “Be Like Me”, Lil Pump speaks on taking lean (or what the kids call “Dirty Sprite”. If you’re still lost, Urban Dictionary says this is “super concentrated cough syrup”). I don’t think he’s wrong to assume that a lot of people are in awe in how he actually rose to fame with little to no effort. Again, the substance of the actual music always speaks on the same things and becomes mundane and a little sad.

In terms of the instrumentals for the beats, I actually thought that most of them delivered in literally pumping you up. Many of the tracks were produced by Diablo and many tracks flowed seamlessly into the next, as they should. But over and over again, Lil Pump misses opportunities to expand and contribute something of meaning in each of these songs. If you’re looking for an escape of regular life, or just some bangers here and there such as “Stripper Name” and “I Love It,” this is the album for you.