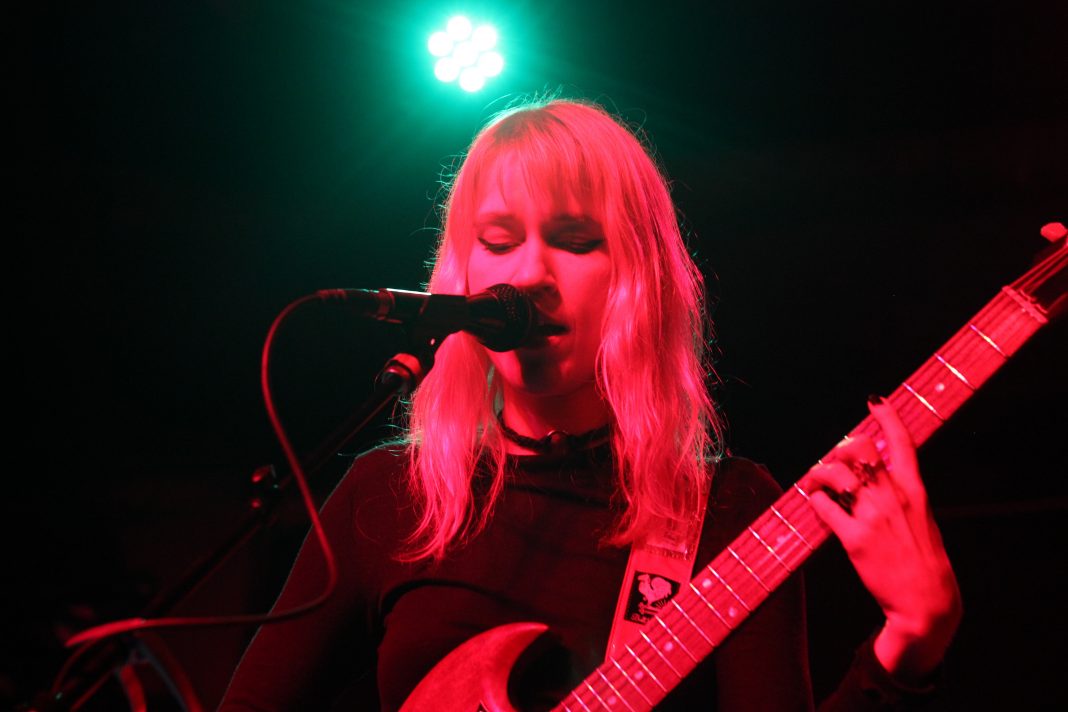 Elvis Depressedly has held a strong place in my heart for the last 6 years or so. Their  fuzzy, end-times pop has always felt familiar and comforting, remaining a strong constant part of my life if I ever feel mellow or need something to feel nostalgic to. Having seen them 4 times before this show, I knew that their set and lineup is subject to frequent alteration. I was intrigued and excited to see how the band would perform and what kind of show they would be bringing to the Prophet Bar. The show started with the band The Cordial Sins, a 5 piece alternative/shoegaze group fronted by lead vocalist Liz Fisher. Their set was incredibly enjoyable, laced with guitar solos and massive walls of sound. I was surprised so much noise could be made from the speakers at the Prophet Bar, but their clever use of guitar playing (including crescendos and tightly orchestrated builds) created large dissonant chords that never felt out of place or off-putting. Quickly following their performance, NIIGHTS took the stage without any hesitation. Although they had one less guitar player than their predecessor, they made up for it with the loudest set of the night. The dream metal group incorporated many elements of shoegaze in their set as well, with large waves of instrumentation that swept through their set over and over. They incorporated quick shifts between quiet and dreamy to ear-piercingly loud ad heavy. Sadly, the vocals were mostly covered by the immense amount of noise coming from their instruments. The truest spectacle of their set was their finale track, “With Bated Breath,” that lasted upwards of 11 minutes and featured numerous grand finales (3-4 of which drew applause from an audience mistaking it for the end of the song). The song contained tightly knit dual guitar soloing, phenomenal builds, and the loudest sounds I have ever heard at the Prophet Bar. Sadly, the management of the venue cut the song short just before NIIGHTS had a chance to finish their set. Though this was very upsetting (shame on you, Prophet Bar sound management), the stage was quickly filled by the headliner of the night: Elvis Depressedly. Out of respect for the band who asked not to be photographed at their shows, I put the camera away and enjoyed their set. While there won’t be any photographs for the rest of the event review, I’ll try to be as descriptive as possible to give you the fullest sense of what the show was like. Lead vocalist and songwriter of the group Mathew Lee Cothran took the stage with the emerald green lights from the stage forming a halo of light around his head. Joined by Covelline of Normal State on the bass, the trio was able to deliver an incredible show for old and new fans alike. With humorous interjections about Tom and Jerry and Mat’s already failed 2020 Presidential run, the show was enjoyable in ways that were unexpected as well.

Over the last 4 years, Elvis Depressedly has come through Dallas many times- either as a headliner or opening act, and each time they play their presence is different than the last. The first time I had ever seen the band was at Spillover Fest when Mat Cothran took up a sample pad and mic over the guitar he held in last nights show. Mat has mentioned previously that he prefers to perform without a guitar, and that the guitar playing can often distract from vocals or overall performance. The following Elvis Depressedly shows came as opening for bands such as Turnover and The Front Bottoms. Each show the band was an opener for felt like it had taken away from the true intentions and feelings the band provides in a more intimate venue. The prophet bar allowed for the perfect type of closeness that truly showcased the bands potential.

Playing many well known songs such as “Weird Honey” and “N.M.S.S,” the band also teased new songs and announced the release of a new album this summer (currently known to be titled Depressidelica). Each new song was interesting and exciting, though the sounds from the bands recorded music are much more reserved and quiet than their live performance, making me excited to hear how these songs will translate to a recorded album. Playing tracks from Mat’s other (now retired) project Coma Cinema, the show was a phenomenal and well rounded look into the performers Discography. Overall, the fuzz-filled show was a perfect way for the band to leave their mark on Dallas (until next time!).