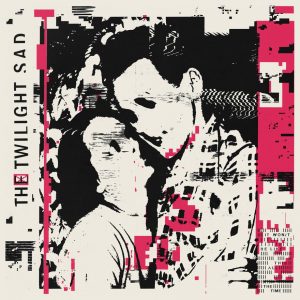 The Twilight Sad have a bit of a reputation surrounding them due in no small part to the name of the band itself — they’re downright gloomy, and nothing about that has changed with their newest release It Won/T Be Like This All the Time. Yet, with 47 minutes of their most classically “post-punk” sound yet, the album still manages to bring something new to the table without sacrificing the personality that first garnered the band attention.

Right off the bat, the album highlights a shiny synth sound that demands attention throughout its duration with “[10 Good Reasons for Modern Drugs],” though the sound had me hooked the most in that opening track and “Keep It All to Myself.” There’s not really a slow moment in the album, and though the pulsating rhythm section keeps It Won/T Be Like This All the Time relatively upbeat, it still finds moments of softness, particularly in “Let/s Get Lost” and the closing track “Videograms.” Don’t let the pace fool you, however, because not a moment of this album is lighthearted in the lyrical sense.

The theme of the lyrics of It Won/T Be Like This All the Time seem to reflect a damaged relationship where vocalist James Graham repeatedly decries the hurt he feels on the part of a lover whom he still cannot seem to live without, which in turn creates a spiral of self-deprecation. In fact, this theme is present on quite literally every song on the album, from the contrast on “Sunday Day13” in the lines “This happened too many times/You hurt me too many times” and “You can take it out on me” to the self-hatred of “Keep It All to Myself” with: “You can’t take anymore, don’t want you to see me/I’m hiding my face in my hands” followed by a repetition of “Don’t want you to see me.” This is no surprise, as the first track from the album to debut last summer, “I/m Not Here [missing face]” is perhaps the most representative song of the whole album, with its building instrumental intensity supporting a crooning of “I don’t want to be around you anymore…you don’t want to be around me anymore/I don’t want to be around me anymore” in Graham’s ever-present Scottish accent. At times, these lyrics suggest a lost sight of the bidirectionality needed in healthy, loving relationships, but a turning point comes in “Videograms” with the line “So don’t start, don’t you start on me,” followed by “The hurt is something I don’t need.” A much-needed flicker of hope fittingly closes out an album heavy with themes of toxicity and hurt.

It Won/T Be Like This All the Time is incredibly cohesive — the pervasive synth and upbeat drums/drum machine paired with similarly-themed lyrics present on each track certainly make for a very listenable album, but it is perhaps at the expense of having songs that seem to blend together. Despite this, a few seem to stand out, like “The Arbor,” which sounds to me the most striking homage to The Cure, whom the band have toured with and take after in many ways. Robert Smith famously harbors nothing but praise for The Twilight Sad, having even covered the song “There’s a Girl in the Corner” from their 2014 release Nobody Wants To Be Here and Nobody Wants To Leave. (Let’s not look over the name of the song also — “A Forest,” anyone?) Besides, with such grandiosity present in every track, why mess with a formula that works?