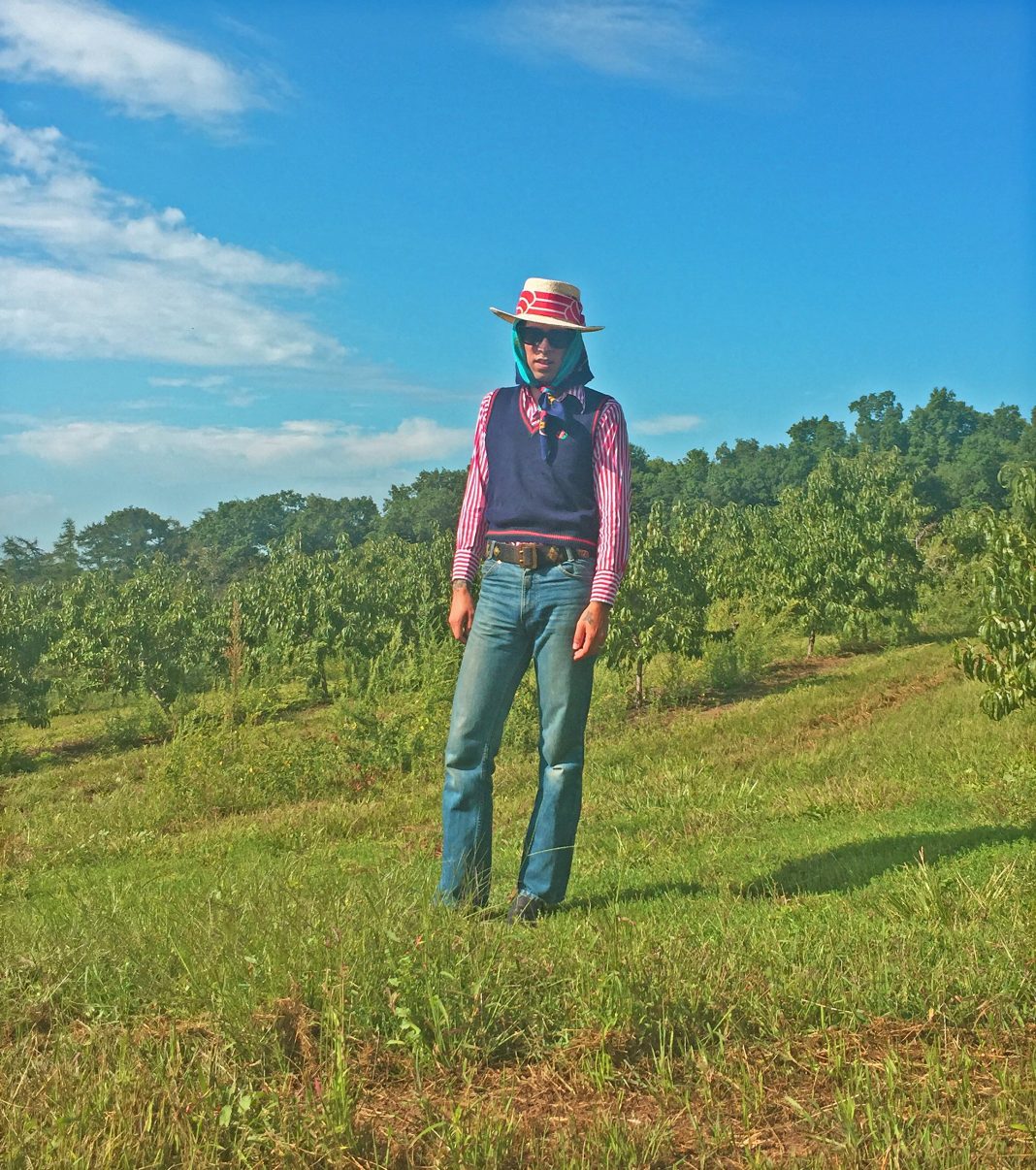 Daniel Romano doesn’t really care what you think about him. Sure, he wants to share his music and play his songs for others, but his new album Finally Free embraces and celebrates where his true passion for music lies: in the moment of inspiration, the fevered dash from words to instruments to mixing, that results in the emotional portrait of a single moment in life. Recorded on a four-track cassette player with little help from others, Dan’s new album may or may not be making waves in the music world but it brings peace and fulfillment to the maker. On a very cold night in Dallas, Dan and I sat on the patio of Double Wide to discuss what the release means to him.

You just released back in November a new album, Finally Free. How would you describe that album to a regular person?

Someone who doesn’t know anything about it? I would say that it’s kind of folky, has psych elements, I guess. It’s probably not easy to like and overall pretty dense but it has nice moments of relief from that. I think it’s probably my best work to date

When you say best, is that more from a place of you’re satisfied with it the most?

Yeah, I guess so. Or I feel like it’s my most accomplished work thus far.

It’s titled with a pretty heavy title. Kind of has a lot of baggage with it.

It’s a very self-centered title. It’s not to be reflected to anything outside of me and my experience.

What does the idea of being finally free mean to you?

I found the process in which I made it to be very liberating and groundbreaking for myself and my process. That’s basically it, really.

Something I found interesting is that you’ve been compared in a lot in reviews to people like Bob Dylan, psych rock, a lot of musical influences from the 60’s and 70’s. I see a pretty interesting political connection between these time periods and now. Do you feel that connection to this music?

I try not to write directly about specific things. I’m more interested in a mood or something like that. But the social climate is very similar now to then so I think just by nature that happens. I wouldn’t say that it’s intentional. I would say that’s dominantly the era of musical influence for me so that makes sense too. I wouldn’t say that I’m politicized necessarily, or at least in my musical output. But everything creeps in.

Coming off the heels of a lot of praise for Modern Pressure, did that affect your creation process for Finally Free?

No. I don’t really pay attention to that stuff. Seems like a dangerous road. I go under the assumption that no one will hear any of it. And in retrospect, even if I know people did hear it and liked it, I try to focus on anything except that. Primarily I’m not interested in making the same thing twice for my own sake and sanity. To get back to what you asked me, I didn’t feel pressure because of the pseudo-successes of a record.

At the beginning of 2018, about a year ago now, you released 2 surprise albums but you’ve since taken them back. What does the action of releasing and taking back art mean to you?

I think there’s very little control left in this particular industry and so that felt like a… The truth is, I had them, I know how the industry works, and how long things take to exist physically. And so I just kind of did it one night without thinking too much about it and within that, decided it would be temporary and whoever gets it, gets it and whoever doesn’t, doesn’t. I was fine with sacrificing the lifespan of those things in order to get them out.

This is not your only musical project, like a lot of musicians. You, specifically, produce and design for a lot of bands. How does your mind frame differ when you’re approaching your own music rather than other people’s music?

I usually try to subject people to my tastes in every way because it’s kind of all I know. And I figure if somebody is coming specifically to me for something, I imagine they want something similar to what I would do naturally.

It’s rarely an issue but I think I put more time in to other people’s projects than I do my own. I’m not necessarily sure why. But probably because of the weight of it being a paid venture and there’s an expectation for a result at the end. Whereas with doing it for myself, it’s kind of more like a fevered state of psyche where I don’t want the momentum to leave once I start making something for myself. So I just kind of don’t stop until it’s finished. It’s hard to describe the difference but there’s definitely a difference between working with other people and working with myself. It’s less healthy, the way I do it for myself. Other people take breaks and eat food and those kinds of things that I find to be mostly in the way.

I can definitely see if you’re making something for someone else, the complaints for it, maybe if something doesn’t work… When I’m making things for other people, here’s so much weight to please them and their audience.

Immediately, if it’s like, oh can you change this, my reaction is just get somebody else to do it.

Over the years, listening back through your discography on Spotify or somewhere, you’ve had a lot a pretty drastic shift in the presentation of your music, your sound, your look, everything surrounding you. Would you say that that change over the years is related to a normal process of growth for you or would you say that’s it’s something more?

No, it’s probably more like beyond me or my comprehension of what it is but none of it is intentional. Just whatever happens to grab me. I would say that I have diverse musical tastes and aesthetic tastes, I suppose, and certain things take the forefront at certain times.

The way I look at it is I haven’t changed much at all. I mean, I’ve grown in the trade, I would say but it feels to me like the aesthetic of things is cyclical and has always been pretty similar. But when records are so concentrated, they’re just a little blip of time, so it feels like this thing where it’s just a quick little flash, really.

Kind of like a portrait of a moment of your life. And considering you’ve been releasing albums for a decade now, everybody’s process of growth over a decade can be sometimes really drastic.

Yeah, I mean, ten years is a long time.

That’s something I’m learning. Since the recording process for this record was so solitary and personal for you, does getting up and bringing theses songs out in public and performing them change your relationship to them?

My relationship changes with songs as soon as they’re written. Like even within recording it, it’s removed. I would say the first time playing through a song after writing it would be the closest I’ll ever be to it. Or even the words before the music is probably the closest and then once you add music and melody to it, it then becomes something morphed from its origin. Some people think it’s really important to deliver the exact sentiment of a song with emotion or what have you but I think that it all affects people in different ways anyways. I think there’s many ways to project a song to capture a particular mood or something and it can depend very much on my particular mood at the time or whatever. But I don’t feel a pressure to represent the song so much. I feel like it exists now and it’s mine but also completely not mine anymore and it’s a show. It’s entertainment at that point. I don’t feel close to any of the songs or protective.

How long have you been on tour now?

It feels like forever. It’s been a month and there’s a month to go. So it’s a weird time.

How’s it been so far?

It’s been great. It’s been very enjoyable. I would say this is the best lineup of people I’ve had the privilege of playing with. It’s very comfortable and fun and we’re experimenting all the time.

Throughout your years, is there a tour story that stands out as really crazy or strange or fun or interesting?

There’s always the promoter running away with the money stories. I have lots of those. My memory is so bad for this. Hey Steve, what’s a tour moment that rally stands out? Every day is the same.

Steve: You’re in a rollercoaster, a train, the best thing to do is not to think about those things. The one in San Francisco is pretty good. Some guy, some maniac, came in, a fan of Dan’s, but a lot more on the country side of things.

Dan: Those people aren’t so into the whole “not doing that so much anymore.”

Steve: I think he came to the show early with his son.

Dan: He had two sons with him and he came backstage somehow and was like, “Hey, come to my house. My wife is going to cook you dinner” and all this stuff, being very forward. And we were like, “Oh, no thank you. We have dinner. We’re fine but thanks for coming.” Cut to us playing the show and we were like three songs in and the guy is hootin’ and hollering at us, saying, “Play a country song” or “What the hell, enough of this rock and roll shit.” And I basically told him to go take a shit. The security guard was eyeing me and I was like, yeah [take him away], because he was bugging me and bugging people all around him. So he gets kicked out. After the show, I went outside to visit my friend and the guy was still there and he and his sons were fighting with the security guard. It was a physical altercation. There was a cop across the street and Terry, my friend, was filming this guy. The guy saw and knocked the phone out of his hand into the street and the cop saw it. So him and his two sons spent the night in the drunk tank.

Steve: It was fun on the other side of things, too, watching everybody at the show who was definitely witnessing some of the more rock and roll stuff for the first time have to decide how they felt about it.

Dan: It was the great divide.

You have another month left. What are you looking forward to?

Do you have any new projects on the horizon for you or do those just spontaneously happen?

I’ve finished another record. We’ve been mixing it in the car while driving. But it realistically won’t see the light of day for like a year. It exists.