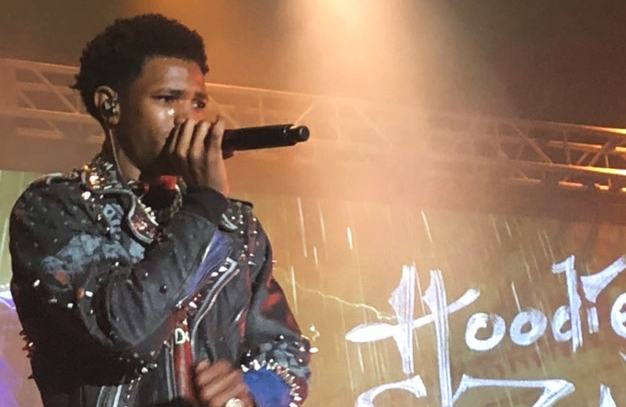 Fans scrambled into the House of Blues, rushing up to the stage for A Boogie Wit Da Hoodie’s “A Boogie Vs. Artist” show. As more people piled in, the venue got tighter until there was barely any space to move. It was a packed show, and there was no doubt that it was going to be a good night.

At around 8:00, rapper Trap Manny performed, setting the energy for the night with his trap beats and heavy verses. After a few songs, rapper Don Q moved onto the stage with more aggressive, but just as energetic flows. The two rapped side by side for a kinetic performance before bringing on DJ Ominaya, who introduced himself as A Boogie’s DJ. He amplified the venue’s liveliness by mixing popular tracks by artists such as Migos, Lil Pump, and Cardi B. After a few songs from DJ Ominaya, the album art for A Boogie’s latest album Hoodie SZN appeared on the large screens, making the crowd go crazy with cheers and screams. In almost an instant, A Boogie came onto the stage performing his latest hit, “Look Back at It”.

Throughout each song, A Boogie never stopped moving. With an obvious passion in each verse, his words brought emotion into everyone in the venue.  Even with his mellow songs such as “Just Like Me” and “Demons and Angels”, the energy never ceased, and the crowd never stopped moving. In between songs he would hype the crowd up, calling out a part of the crowd for “not being loud enough” which got a playful rise out of everyone. One of the songs that had the crowd moving the most was his hit “Startender” off of his latest album. It seemed like the whole crowd moved as one unit, with one loud voice rapping along.

Along with about half of his latest album, A Boogie performed a few of his older songs including “Drowning” and “My Sh*t”, shouting out his day-one fans before each one. It was obvious he appreciated his fans, and his words in between his songs set positive vibes throughout the night. About halfway through the show, rapper and singer Melii came onto the stage to perform her latest single “HML” with A Boogie which took the crowd by great surprise. Her wonderful singing mixed with A Boogie’s flow was a great addition to the show. At the end of the night, A Boogie thanked the crowd for coming out and announced that the show was over before DJ Ominaya asked the crowd if they wanted one more song. With a resounding yes throughout the crowd, A Boogie performed “Come Closer” to close out the night. The energy never stopped, even as the night reached its end.