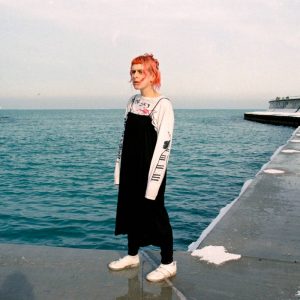 The years of your early 20s are rarely easy on anyone, but not everyone so clearly chronicles the pain and transition like Lillie West. “The Lamb was written during a time of intense paranoia after a home invasion, deaths of loved ones and general violence around me and my friends.” While these themes and memories are straightforwardly referenced throughout the album a handful of times, the permeating sentiment of a nervous rebirth softly yells from behind each track through the strikingly vulnerable lyrics paired expertly with a hazily distorted guitar.

The second full length LP from Chicago Band Lala Lala functions, in the context of their discography, as an older sibling to debut Sleepyhead. Broadly speaking, it sounds exactly like what it is: a more mature version of West, one that would stay up until 3am with a panicked Sleepyhead-era West to assure her that everything would be fine in the end. Though the sonic aspect of The Lamb is much calmer and more restrained than the devil-may-care frenetic energy of Sleepyhead, fans fiending for similarities can find compromised solace within the confused and energetic “I Get Cut”; through the fuzzy guitars and occasional repetition in the verse-chorus format escapes the paranoia interwoven throughout the album. “I wish Herc hadn’t died / I wish I hadn’t gotten robbed / But I bought a bat to keep me safe at home / and I’m so lucky that I’m never alone”. The Lamb separates itself from previous Lala Lala releases and pre-existing power indie rock by putting a slightly translucent and punk-tinted film over them, making it a little fuzzier but, more importantly, allowing Lillie some much needed protection through this careful exposure.

Past some sonic similarities to Sleepyhead, The Lamb brings an entirely new attitude and energy to the front. Sleepyhead comes out swinging sounding pissed, sneering “I drink more than I want to / Cuz it makes you easier to talk to / And what you’re saying is boring” on “Fuck with Your Friends”. Tracks on The Lamb sound like she’s choosing her words more carefully, not because she’s hesitant in case she’s misinterpreted, but because she’s trying herself to figure out how she feels along the way.

“Destroyer”, lead single and first track on The Lamb, is quintessential in understanding this album along with the experiences that shaped it; a now sober West sees things with the same force, but much more clearly. You can feel the quiet focus in the record as she shifts her energy from forgetting to refining, transcending the word “relatable” and pushing directly past into a feeling you know you’ve experienced before. Using the weapon of hazy and powerful post-punk-leaning indie rock, West strikes directly into your strongest yet most vague memories, pulling out everything you forgot you felt on a particularly busy cloudy day. It all feels immediately familiar, and terrifyingly so. “Water Over Sex”, the second single leading up to the release of the album, is a wistfully redemptive song despite West’s best efforts to diminish her forward progress. “You think I’m good / well I want to be gooder” she croons, not fully believing she’s doing things right and terrified it’ll all fall apart. Constantly worried, she asks: “I’ve had too much fun / when will it get taken”?

This anxiety persists through other tracks on the record, but none so clearly as “Dove”. It’s much quieter and slower, but the ideas within them remain the same; “It’s all made up / Everyone just leaves”, she sighs in resignation. This and “See You at Home” comfortably break the sonic format established by all other Lala Lala tracks, a process openly encouraged by the tabula rasa perspective of The Lamb. But while “Dove” takes the route of defeated acceptance, the final track diverts its attention elsewhere – toward hope. It emanates the friendly familiarity that calls to mind old doo-wop tracks, a soft back and forth between West and bassist Emily Kempf blanketing the listener in some final calm (complete with saxophone); “And it’s already over / I release you from us both / Goodbye maybe forever / I’ll remember what she wrote”, dealing with the same anxiety of loneliness and abandonment prevalent in “Dove”, but in a way that indicates some final acceptance of it.

Whether showcased through vulnerable lyrics, the powerful instrumentation, or the stories behind them, The Lamb is a beautiful exploration of the infinite opportunities afforded from starting over clean while simultaneously putting an affirming hand on your shoulder and letting you know just one thing; you don’t have to be brave the entire time you’re doing it.