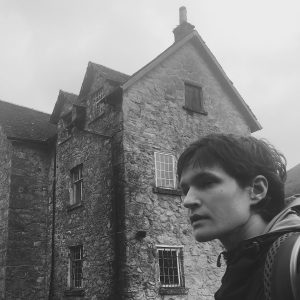 I used to know someone. All they did was exist and they were still special to me. Their eyes glowed like planets, and their hair shimmered, no matter what shade. Most of all, to this day, I can’t find the words to describe their voice. When I knew them, they would sing whatever words they fancied leaving their tongue, and I would awaken like the sunrise to the morning birds. They would sing songs I previously hated and I could suddenly see the beauty in the words. They would play a cheap ukulele or a three-quarters guitar, and they didn’t even play that many notes, but it was just enough to be a soft backdrop under their loving croon. When I first met them, they would lay a clumsy hand on the strings and wail, but as the months drew on, their fingers grew nimbler, and their voice gentler. I could only hear it through their laptop microphone; delicate nylon plucks seeped through the hiss of the computer fan, their fluttering soprano worn by the audio file’s heavy compression. It was profoundly intimate, in a way I doubt they would feel comfortable admitting. It still feels like a dream.

I think I told this person I loved them once. They assured me that they felt the same, but we both knew it wasn’t a love we were meant to act upon. It was like a more poetic, mushy version of artistic respect. I appreciated their craft, but in a way that made me want to hear their every thought forever. And when we both acknowledged this feeling, neither of us even flinched, like it was already an understood agreement. We had even discussed collaborating once. They showed me a song they wrote and I immediately saw instrumentation appear alongside the words. I wanted to show them what I heard; I wanted them to find the song as beautiful as I did. As you can probably guess, it never transpired. Perhaps it was just circumstance rather than apprehension. I still have ideas, and I still hear songs in my head where their voice would fit like a glove, but I know I’ll never be able to try that glove on.

I was 16; no doubt all these feelings stick with me today because they occurred during my formative years. The freshly poured cement of my taste was slowly drying. The relationships I had then, I still think about now. Make no mistake, nostalgia is at the wheel. But I think it’s been made pretty clear in this day and age that nostalgia is a violently powerful force, one that drives us to make decisions previously unfathomable. I’d argue that, in admitting nostalgia’s inescapable influence, one can find a certain exclusive euphoria. An easter egg of feelings, if you will, only available to the most vulnerable of us. It’s a feeling we too often try to catch; we see glimmers of it and swipe at it, we dig to ridiculous depths to try and uncover it. It’s easy to feel wafts of it through music, but rarely does it actually make you stop everything and feel a crater being filled in the center of your ribcage.

This person is still around, we just don’t talk anymore. They’ve moved far away, changed their name, started and finished art school, and done a load of different things for reasons independent of me. I wouldn’t be surprised if I found out they don’t remember me. They continue to excel to this day at other things, and they’ve never been happier, and I’m grateful for that. But that bittersweet nostalgia still creeps into my heart every so often, and I’ve always longed for some sort of closure. I often wish to reconnect with those moments, listening quietly and intently to that pillowy, graceful voice over those halcyon fingerpicks. I know I’ll never see that small slice of time again, and I’ve come to terms with that. But for now, I like to believe that the spirit of that idyllic mini-life lives through the tragically divine songwriting of Adrianne Lenker.