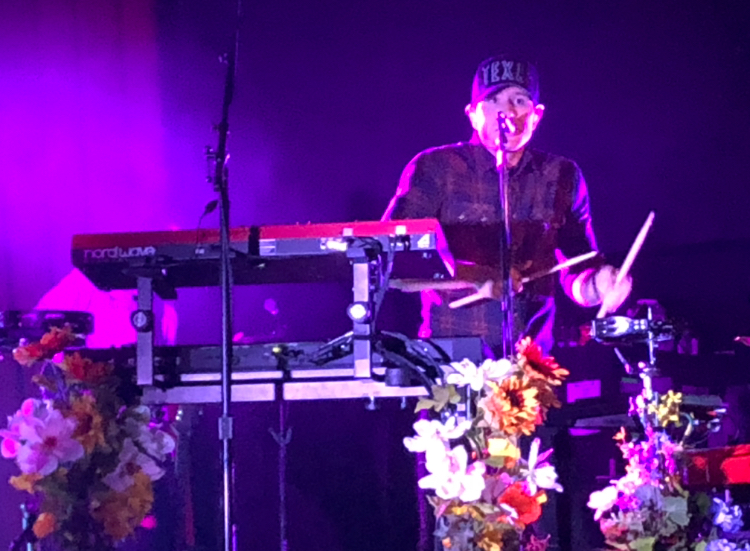 The crowd waiting to get in to the House of Blues on Friday was enormous. Before the doors even opened, the line wrapped around the side of the venue. Once everyone poured in, there was barely enough room to move around inside.

The event started at 8:00 pm with Matthew Thiessen and the Earthquakes, an Alternative duo that had just released their “Wind Up Bird” album this past August. They were a wonderful opener, with very calm sound and easygoing banter with the crowd between songs. They concluded with a song based on Disney’s Robin Hood, setting a positive and mellow mood in the audience. Around 9:00 pm, founder and only continuous member of Owl City, Adam Young finally stepped out onto the stage, getting ready in front of his keyboard, microphone, and electronic drum set. Starting with the song “Verge,” Adam performs as a one-man band, playing every instrument on stage including several guitars. After the song came to an end, his drummer and guitarist came onto the stage for the rest of the show. At the start of the show, Adam wore a Texas ball cap, telling the audience how much he loved Texas. Before starting his next song, he threw his hat into the crowd causing multiple people to reach out for it.

About 12 songs in, Owl City finally played their 2009 electronic pop hit “Fireflies”. He asked everyone to turn on their phone flashlights and wave them in the air to “look like fireflies”. Once the song started, the crowd screamed and sang along. It was a fun experience seeing everyone with their flashlights up in the air, singing along to their favorite song. At around 10:20, Owl City played their final song for the night, “All My Friends.” The third track from their latest album Cinematic, the band finished the night off with just as much energy, if not more, as the beginning of the show. It was truly amazing how they continued to amaze the crowd throughout each song.

The set and special effects were very pleasing with a galaxy/space theme. The giant screen behind the band shimmered with stars and throughout every song, colorful bars of light lit up along with the music, creating a more immersive experience. Adam prefaced each song with space-related movie quotes from films such as “It’s a Wonderful Life” and “Star Wars”, which goes along with the Cinematic Tour theme.

Overall, Owl City’s Cinematic Tour was a mesmerizing experience with a mix of electronic, pop, and soft rock songs. Adam Young truly serenaded the crowd and made the night an energized and amazing one.