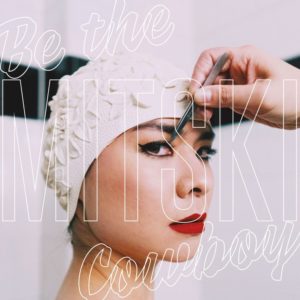 Mitski has been a tough sell for me. I first learned about the Japanese-American singer-songwriter through her critically lauded 2016 record Puberty 2, described to me as an emotionally charged 90’s alt-rock throwback. Listening back, I would say there’s much more to her than that tag, but the album didn’t seem to present anything to me that I hadn’t heard and enjoyed more on records like Courtney Barnett’s sometimes i sit and think, and sometimes i just sit, or even Angel Olsen’s My Woman. These artists all have a keen knack for elevated rock music with detailed, vivid storytelling, but while I admitted Mitski Miyawaki is an essential part of this sector, but it wasn’t until now that I was finally sold.

Be The Cowboy is a new monster entirely. In 32 minutes across 14 relatively bite-size tracks, Mitski’s latest outing could be considered a concept album in a way, because of the recording process as well as the unifying lyrical themes; performed with, as she put it in a statement, “the image of someone alone on a stage” in mind, she recorded a single vocal take for nearly every track, performing each song as a one-woman vignette, detailing stories of devotion, emotional exhaustion, and loneliness. Each scene is starkly lit, developing portraits of a character or a moment, pulling the listener to the edge of their seat just before fading behind the curtain.

While the emotions on Cowboy are tangled and distraught, Mitski pulls it off with the fervor and empowered vigor of a stage actor. Feminine dynamics are explored through Mitski’s own eyes as a traveling artist (“Remember My Name” or “Nobody”) or through characters of her own design (“Old Friend” or “Me and My Husband), and while the language is simple, her conviction is stronger than ever before, and something I couldn’t ignore this time.

I want to stress the theatrical nature of Be The Cowboy. The opening track and initial single “Geyser” is—besides being one of Mitski’s best songs without question—aptly explosive, with the same verse melody growing more and more pent up until finally gushing with melodious IV-I chord progressions and triumphant strings; you can practically see the water shooting up from the ground. A similar explosion occurs on the highlight “Pink In The Night”; Mitski has the power to elevate a simple bedroom-pop melody to angelic heights in a way that has yet to be seen this year.

She’s not above the occasional groove, though. Take the track “Why Didn’t You Stop Me?”, which incorporates new wave synth bass and trumpets indebted to 70s disco to a simultaneously blissful and shadowy effect. There’s also, of course, the standout single “Nobody,” whose almost ridiculously repetitive chorus transcends monotony and turns very real feelings of isolation into a sort of dance-like-nobody’s-watching celebration. Again, her narratives aren’t as wordy as a Mark Kozelek or a Kevin Barnes, nor are they as raw as a Soccer Mommy or a Liz Phair; instead, the tales told on Cowboy are carefully reserved, painting a picture with just enough detail to transmit significant emotions, as well as just enough pure color that the construals can feel larger than the world they come from. “Most advanced American songwriter?” Maybe so maybe no, Iggy Pop… but as a long-time Mitski skeptic, I’m thrilled to announce that her theatrical rock vision has finally dazzled me.