Home Reviews Event Reviews Beach House Lives up to Expectations, But Not Much More 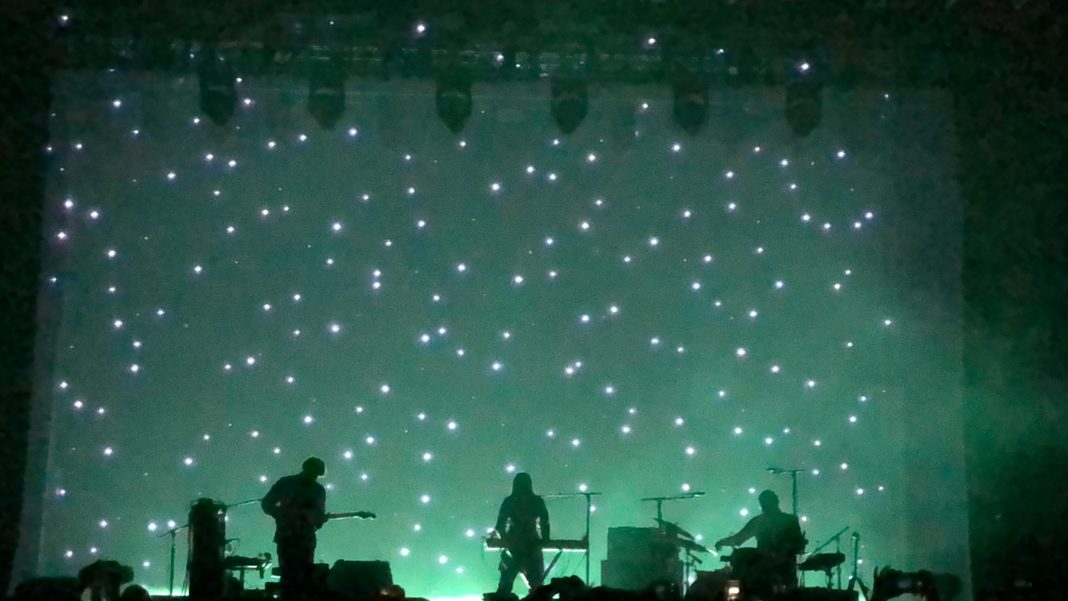 Setting the tone for the latter half of the night, upon entry I was sent away from The Bomb Factory to put my camera up for lack of a photo pass for this highly anticipated Deep Ellum event. Grumpily returning and re-entering my place in line, ticket in hand, I was absolutely taken aback by even entering the venue. I hadn’t been in a couple years at least, and the level of security was strikingly comparable to a literal airport security check.

After the venue had ensured that I was camera-less and had no liquids in containers over 8oz (not really but come on, walk through metal detectors?), I was let into a venue that feels much more like a convention center warehouse-turned-hip-spot than the comfortable atmosphere I’m usually afforded with a concert in Dallas.  I attempted to wade my way to the front of the sea of tightly packed people towards the front of the stage to no avail, as these diehard fans refused to give up their spot for Beach House. I figured fair was fair and settled on flanking the mass of people right as Ed Schrader’s Music Beat took the stage.

This was a set that I was equally as excited to see as I was Beach House, as this incredibly high-energy and naturally comedic duo act quickly made their way to my favorite artist personalities upon having their fun KEXP session sent to me several months back. They played the majority of the tracklist from their 2018 Dan Deacon-produced release Riddles, including personal favorites of mine “Tom” and “Culebra,” all the while entertaining the crowd with short covers of Elton John and David Bowie songs paired with various jokes and non sequiturs. ”I just want to let the venue know that I’m willing to do Elton John songs at half the price. I’ve got twice the hair, half the talent, and I’ll do it for half the price, just putting it out there.” Ed’s erratic personality paired with Devlin’s willingness to go through with any bit that Ed threw at him would’ve made for an entertaining enough performance, but they still wowed both old and new fans with powerful and clean renditions of their tracks that shine brightest when performed live.

A little under half an hour after the joking friends departed the stage, Baltimore legends Beach House took the stage and were immediately met with roaring excitement from the huge crowd. A warm haze of orange gradients projected behind them perfectly complemented the dream pop that so effortlessly lulled the crowd to calm, before erupting into applause at the end of each song. As their setlist progressed and landed on “Dark Spring”, the opening track for their newest release 7, they traded the soothing gradient backdrop for starry night visuals, all the while keeping themselves shrouded in the darkness that goes so hand-in-hand with a Beach House live show, whether to enhance the mystery that’s beckoned from the dreamy haze created by their songs or because they understand that their tracks draw a listener’s gaze well enough. “We might be in the dark, but we see and feel and we’re very grateful for your support”, showing that gratefulness by performing fan favorites like “Lazuli”, “Myth”, and “Space Song”. I’ll preface the rest of this review with this: I truly think Beach House is an incredible band, a band that does what they do very well. They’ve allowed “indie teens” to keep their head in the clouds for the better part of thirteen years, ultimately cultivating a sound that’s both formative for so many young music listeners as well as one that sticks with them through the years. That being said, with the relative intensity they used to both curate and promote their newest release, I expected a more refined and, for lack of better terms, themed and theatrical performance.

It was their 7th album, bringing their total discography to 77 songs, with the record’s catalog issue number being 777. Hell, they released the first single on a date whose numbers add up to 7 (Valentine’s Day). They had the opportunity to create an incredible and immersive experience completely capturing the atmosphere they themselves admitted they wanted to create, and they fell short on the live aspect. The actual record deserves all the praise it’s been given and more, but it was because of how incredible the record itself was and how strongly it stands in their discography that made this run-of-the-mill Beach House performance all the more disappointing. The only indication that this was a tour spawned from the release of 7 was the fact that they played (funnily enough) 7 songs off the new tracklist, clocking in just under half of their seemingly-infinite setlist.

To their credit, they absolutely lived up to the expectations I’d had for a Beach House concert, despite the limitations that the sound and acoustics tend to set on acts that perform at The Bomb Factory. Ed Schrader commented on the absolutely huge disco ball that towers over the crowd at the venue, a gorgeous addition to the location that went vastly underutilized, hanging like some forgotten tree ornament three months after Christmas has ended. I caught a few glints here and there, particularly strongly during the performance of “Pay No Mind” (my personal favorite off the new record), but ultimately it covered a very small square footage on the ceiling of the venue and left me desiring more from both a venue and an act that I knew could do more. I know it seems strange to harp on a lack of disco ball usage, but it was the perfect representation of the band not living up to their full potential despite having a seemingly pretty good grasp at exactly what that potential is. They gave exactly what I expected a Beach House performance to be, and not much more. The visuals and lights were entrancing but not impressive enough to stand out given the fact that I was what felt like half a football field’s length away from the stage. It was a visual and auditory experience that I’m certain may have floored me at a smaller venue but felt underwhelming in the vast expanse of The Bomb Factory.

Ultimately the show, whether the ire was drawn from the venue or the performance, cemented Beach House as an artist that I feel more fulfilled listening to in the comfort of my own dark bedroom or in my car at night rather than live in concert. I fully believe that all of their discography deserves the recognition they’ve garnered over their lifespan as a band, but I think that recognition stems from a particular kind of aural intimacy that’s difficult, if at all possible, to translate into a live performance in a 50,000 square foot venue meant to house upwards of 5,000 fans.