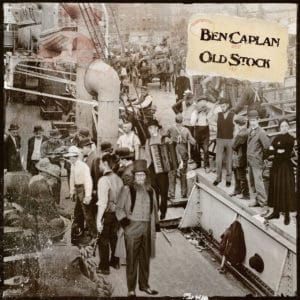 Ben Caplan’s latest record, Old Stock, comes out of his latest project- Old Stock: A Refugee Love Story – which was performed off-Broadway at 59E59 Theaters in New York from March 8th to April 22nd. In that time,it was nominated for six Drama Desk Awards, and won a Herald Angel Award and a Scotsman Fringe First Award.  It’s about the true story of two Jewish Romanian refugees coming to Canada in 1908, written by their great-grandchild Hannah Moscovitch. The play and album heavily rely on Eastern-European folk sounds and melodies to give real weight and personality to the story and this heritage, and successfully work to twist this story to be just as topical to modern-day issues as it was for when this play was set. It’s so refreshing to hear fierce accordion, dark piano, clarinets, flutes, and violins alongside drums and bass.  There’s even a little bit of washboard sprinkled in occasionally. Themes such as immigration, racism, hate crime, and religious intolerance are all addressed in this story, and serve as reflection and comparison for how our world has- or hasn’t- changed since.

At times, Caplan’s diction is collegiate-level but can switch instantly to vulgar and brash, which enhances the raw feeling this album aims to present. Thoughts aren’t censored, and some descriptions get very visceral.

The album starts off strong, full of energy and grit with “Traveler’s Curse,” and the familiar baritone voice that Caplan’s fans have been waiting to hear in all it’s glory. Never has a narration of sanitation and health checks sound so ominous than in “You’ve Arrived,” with listing off diseases becoming more catchy than daunting. “Truth Doesn’t Live in a Book” is, in short, a rated M Schoolhouse Rock installment on Biblical interpretation. It’s very upbeat, with thought-provoking lines such as “An eye for and eye means fair compensation, it doesn’t mean take up arms with another nation” and “‘Justice for all’ is composed of the ugliest compromises…”. The mood changes dramatically with “Intermezzo 2,” which won’t be described in detail here as not to ruin one’s potential listen of the album. What will be said is that it works tremendously well with “Plough the Shit,” the song that follows it up, because Intermezzo 2 gives context to the tone of the song and elevates its spite.

The songs don’t always flow into one another gracefully, but that’s because this album doesn’t serve as a story album; it’s an accompaniment to the play which wasn’t a musical but had multimedia aspects to it. Not all the songs were put into this record, and not all the songs on this record appear in the play. “Widow Bride,” the first song released early to promote the album, was never incorporated into the final version of the play but found a home in Old Stock. During a live Q&A on Facebook Ben Caplan hosted the day after Old Stock was released, he revealed that a major musical moment for the play- a ritual prayer for the dead- isn’t included in this album because no recording of it felt right or fit with what they were trying to create with this album.

When asked if Old Stock: A Refugee Love Story would ever exist as an official recording, Caplan said no, but they are playing around with the idea of a potential film-version of it.  So, for now, Old Stock serves as the only window into this stunning, dark folk tale for us Texans. Hopefully not for too long.