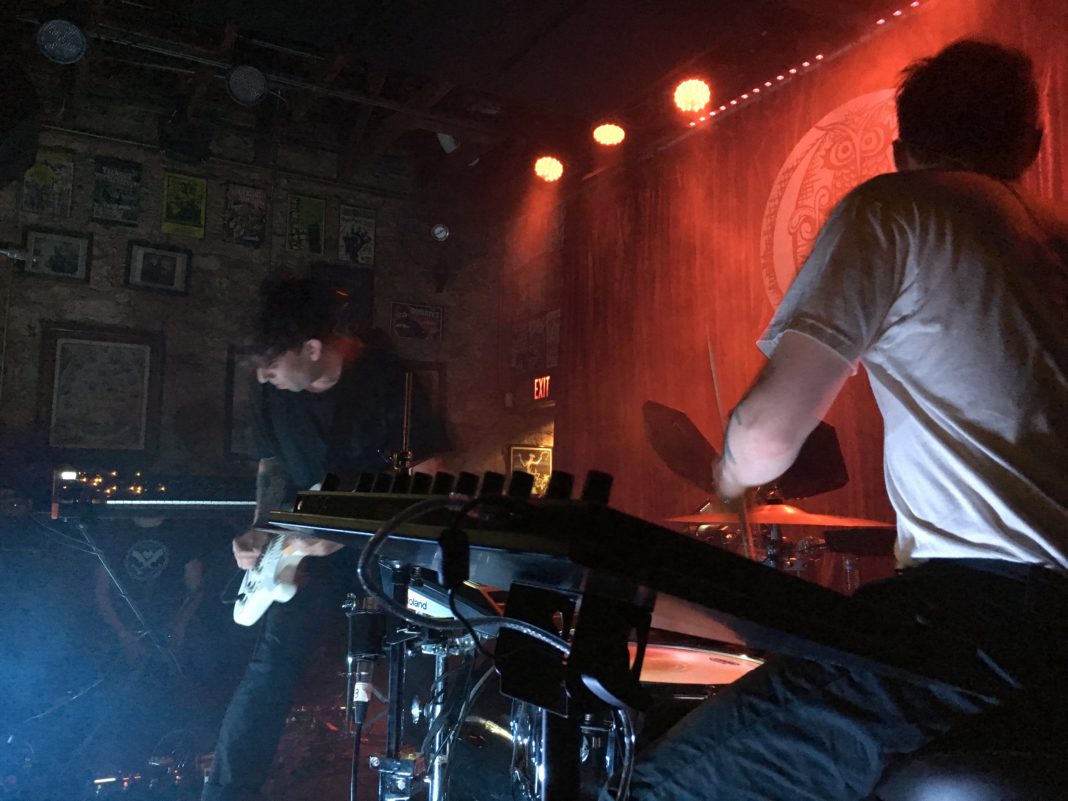 After getting lost in Deep Ellum trying to find the right parking spot, I headed towards Three Links to see Boy Harsher and The Soft Moon. Three Links mostly acts as a bar, but it is also very well known locally for hosting musical acts, even for musical festivals like Spillover in 2016. However, it is quite small, becoming crowded very quickly, making it somewhat hard to move through the crowd. In fact, I was surprised to hear that Rostam of Vampire Weekend played Three Links not that long ago, considering his notoriety and Three Links’ rather small size. It’s not my preferred concert venue, but it does give off the local, homely vibe that I prefer to large but impersonal arenas and stadiums, and it helps me feel connected to the overall community in Downtown Dallas. Admittedly I overlooked that there would be another act performing, and when SRSQ (pronounced sears-queue) took the stage, I wasn’t quite sure what to expect. But she took full advantage of her half hour slot performing her brand of emotive synthpop, her talent and confidence demanding the audience’s attention. Her immediate striking asset was her vocals, which were belting and emotive yet also soft and welcoming. At no point during her performance did I feel she was not giving it her all.

She is a solo act, but her two keyboards and drum machines provided enough instrumentation to establish the mood of the songs without pulling too much attention away from the vocal performance. And she was perfectly willing to experiment with her setup. Her most notable moment was when she used a vocal pitch shifter to deepen her voice, which gave off a haunting, chilling effect, but her passionate delivery was thankfully still able to shine through. She definitely left a lasting impact, and I wish her continued success in her music career.

When Boy Harsher started performing, I found myself at the back of the crowd, and because Three Links gets crowded very easily, I had to wrestle my way through the crowd a bit in order to get close enough for a decent picture and video. Despite this, I oftentimes found myself drawn to Boy Harsher’s set to forget my current predicament and just stop, relax, and enjoy the show. Boy Harsher is an electronic group from Northampton, MA (which Pitchfork notes is also the home of Dinosaur Jr. and Speedy Ortiz) who describe their sound as “somewhere between industrial, drone and confessional storytelling.” Despite this description, their music oftentimes has a nice, dancable groove, reminding me somewhat of Crystal Castles’s debut album. Adding to this is vocalist Jae Matthews’s sultry, Nico-esque delivery, combining to a nice blend of dark, spooky sounding music that can pump you up.

I quite enjoyed Jae Matthews’s stage presence, performing motions I can only describe as “tired but energetic”. It’s essentially the perfect way to move to their music. Producer Augustus Mueller’s small headbobs was also quite entertaining, and you could tell he was enjoying himself. While there was a surprising lack of moshpits, the audience was visibly into it as well, with many folks smiling and dancing along, engaged with the performance. And when Boy Harsher said they were about to perform their last song, I remember people in the audience loudly begging them to perform their most well-known song “Pain” (which they ultimately did). Overall, it was a fun time for everyone involved. The Soft Moon’s set was very loud, flashy, and energetic, especially compared to their sound on their studio albums. “Black”, in particular, was definitely much noisier and louder than it is on Deeper. And while frontman Luis Vasquez’s vocals on “Burn” felt somewhat muted on it’s appearance on Criminal, he sounded a lot more shout-y while performing it live, and when accompanied with live percussion, makes the song all the more pulsing. Vasquez, like SRSQ, also sometimes used a vocal pitch shifter, using it to raise his voice on tracks like “Give Something”. The effect feels strange and alien, feeling kind of like an animal in pain, but it’s a perfect match for the melancholy vibe of the tracks it accompanies. The Soft Moon was often accompanied by rapidly flashing lights that complimented their energetic performance. And despite how small the performing area looked, especially for a full band, Vasquez found a myriad of opportunities to move and thrash around with his guitar, even once looking like he was about to throw his guitar to the crowd. The most notable example of this was when Vasquez brought out an upside down metal trash can to use as percussion, banging on it with drumsticks. I admire when musicians decide to perform with unexpected everyday objects, since oftentimes it leads to interesting sounds when utilized correctly, and the harsh tone of a metal trashcan was the perfect accompaniment for an industrial rock band like Soft Moon.

The show as a whole was very memorable, with all three acts giving strong performances. One important achievement to note was that despite the three acts meshing well together genre-wise, they each managed to avoid sounding like carbon copies of each other, sticking out with their own unique sound.