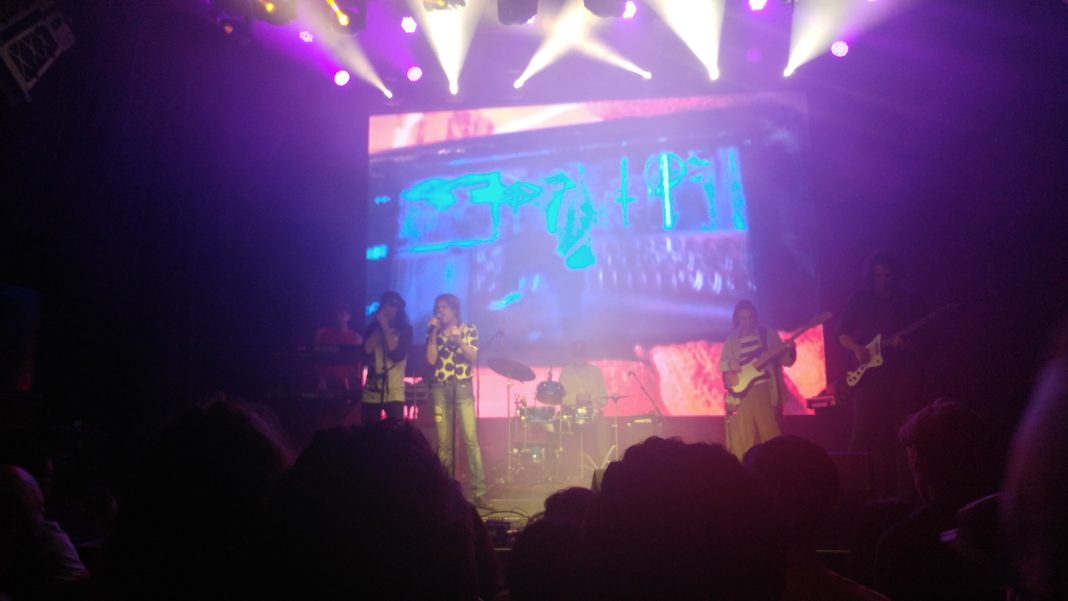 Ariel Pink is a rather interesting character in the music industry, and that’s not just limited to his characteristic sound. To spare an explanation of his past, this is Pink’s second time coming through Dallas in the past year. The last time he came down featured a rather conventional set showcasing his new album, Dedicated to Bobby Jameson, and providing some of the fun songs from later endeavors – think Before Today onwards. What surprised me of the past set was that there were some deep cuts, like “Ghosts” or “Jagged Carnival Tours” sprinkled in with newer Ariel Pink works. After that show, It felt like a standard showcase of Ariel Pink in the current day; mostly catering to new fans while throwing in a few curveballs. The crowd was quite energetic for most of the set with few exceptions cropping up in between.

One such exception was the chillingly still crowd during “Jagged Carnival Tours” – the once lively audience then stood in awe as the rumbling drums and bassline laid out a heavy groove to Pink’s chants. This brief lapse of energy was well bookended by the relentless jumping around that took place during newer Ariel Pink tracks. It would make complete sense to expect the Desert Daze Caravan, one originally split between a multitude of different acts, to provide an Ariel Pink that could cater to a wide audience. As the show came closer and closer, artists would drop from the lineup until there were only two acts up for the night. There was a moderately respectable turnout at Canton Hall for this show, although I would have expected a much smaller venue for such a lineup.  DIIV (pronounced “Dive”) was the only opener once the show came around, displaying a rather generic blend of Post Punk + Dream Pop that shapes a good chunk of the music landscape these days. An expected opener for what I expected to be an Jameson/Pom Pom heavy setlist. There was a good amount of banter between the crowd and DIIV, from involving Magic: The Gathering, to song requests. DIIV’s response to this banter was pretty weak, responding “that’s real fuckin’ funny.” to one of the jabs at their musicality. Requests for older songs were also quickly shot down by the band. For someone who doesn’t listen to DIIV, it didn’t really leave a great impression. After a lengthy intermission, Ariel Pink and crew hop out on stage to a half full Canton Hall. Pink started with “Time to Live”, and “Bubblegum Dreams” in front of what seemed to be some home videos crafted for each song. It was real neat to see Ariel Pink playing on a sizeable stage, and the set seemed to take the standard format that I had expected. I was rather surprised that the crowd’s energy found a few months ago at Trees was now absent in Canton Hall.

For the uninitiated, this is a good time to mention the microgenre that was coined with Ariel Pink’s works in mind, Hypnagogic Pop. With a great affinity for the Neo-Psychedelia and Noise network that loosely worked around the west coast, Ariel Pink stands as a great leg for Hypnagogic Pop that incorporates pop-sensibilities into rather frantic, ADD-riddled pieces. The genre took a turn as Ariel Pink’s Haunted Graffiti released Before Today, and related artists also decided to clean up their sound, or completely move into other fields. What stood as a primarily DIY scene was dying out, and the genre would later be used to describe lo-fi music in general that couldn’t quite be lumped into neighboring Lo-Fi Indie or Chillwave.

This is rather essential to note, as after “Bubblegum Dreams” came “Loverboy” which was a slingshot right into the nitty-gritty of what defined Hypnagogic Pop. While I couldn’t believe what I was hearing at first, there was no doubt once a manic Ariel Pink unleashed his mannerisms in full force, even performing John Maus’ verse. While fans of Haunted Graffiti got a huge kick out of that, a sizeable portion of the crowd seemed to be confused at what was unfolding before them. “I guess that would be called a deep cut”, Ariel lets out nonchalantly while running the phone call sample from the beginning of “House Arrest.” At this moment I knew that I was in for a hell of a show. The performances were rather cohesive and tight, and it was almost jarring to hear a version of “House Arrest” that wasn’t all over the place. It’s also real neat to see that the performance still retained energy from a storied DIY past. The frantic display was riddled with noise, staying true to the original recordings and breaking any expectation of what a Canton Hall set could sound like. Some members of the crowd nodded their heads to it lightly, some others left the venue. I recall memories of seeing “Kinski Assassin” at his last show and everybody jumping around and having a fun time. Yet, as the driving riffs pushed further and further into “House Arrest”, a mosh pit was only a distant dream within this crowd. While the crowd wasn’t really getting down, there was still a sizeable amount of cheers following each song. A quick return was made to newer Ariel Pink for a few songs, with “Dinosaur Carebears” standing out as another odd, but welcome choice. While my expectations were more than met by the early return to old Pink, it turns out that he wasn’t quite done going back. “Ghosts” was played again, coming through a whole lot more clear than in his Trees show. “Hardcore Pops are Fun” absolutely confirmed that this crowd wasn’t too familiar, and unfortunately not willing to move to earlier Ariel Pink.

As the set progressed onwards, the half of the crowd that remained built up some energy as Ariel Pink jumped around his discography. Thinking to include “Among Dreams” from The Doldrums into the mix shortly afterwards, Ariel Pink ensured that there were very few stones left unturned within his official discography. The finest part of this performance was that the home-videos in the background made sure to label each song out for the viewer, while displaying a video constructed for each song played. Pink invited the viewer to dig deeper into his discography with a definitive format for songs that he originally recorded on cassette. There was a surprisingly quick, and synth heavy rendition of  “Thank You” thrown in with a song I couldn’t recognize. To baffle me even further, there wasn’t a specific video for this one. Perhaps a new song? As the set finally came to an end, there was a good amount of people cheering for an encore. “Four Shadows!” someone yelled, others called for “Round and Round” or “Negative Ed.” As Ariel Pink took the stage again for an encore, he perfectly ended the set with “Netherlands”, something that I thought he only played at festivals outside of the country. I couldn’t possibly  imagine how it would be to see Ariel scream his lungs out over the rumbling, and ever building “Netherlands” without listening to the song beforehand. It made for quite an explosive ending to an already fantastic set.

I’m unsure how many people were prepared for the set that unfolded before them, there’s always a suspicion that Ariel Pink’s fame mainly comes from people who hopped on since Before Today and haven’t really looked to his earlier works. Understandable as before his time at 4AD, most of his music ended up on Paw Tracks. By the end of “Netherlands”, the crowd was a fraction of its original size, yet it seemed understood that they witnessed quite a performance by Ariel Pink. For big fans of Pink, and listeners who dabble within other related artists, this was a show you could cross off your bucket list. Hypnagogic Pop is a dying breed, which is only natural for a microgenre with such a pretentious name slapped onto it. As prominent artists within that genre, Ariel Pink included, moved towards more hi-fi endeavors, the genre seemed to morph into something different. Now thrown out to describe a sound that is far from DIY, music nerds have somehow used to term with bands like Homeshake, MGMT, and The Voidz. While this transfer has led to the genre’s output losing a decent amount of the edge that gave it’s cult following from the start, Ariel Pink somehow brought it back with a pretty nice budget.

From the hazy future of Pink’s career after some recent interviews, to a few artists coming out to call his music genius, it’s pretty hard to predict his next move. The fact that he decided to showcase deeper cuts at the forefront with his band was a choice that displayed that he isn’t at all interested in racking up fame at the cost of musical integrity. This was no careless decision, everything was planned well and the visual aspect of the show blew my expectations away. I could have only dreamed of seeing a performance like this in 2018, but it became a reality at Canton Hall last night