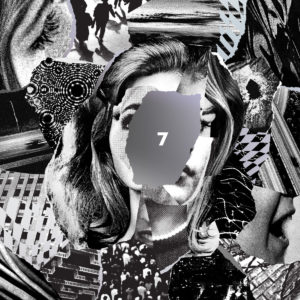 The infamous Baltimore dream-pop duo Beach House comes back with 7, their seventh full-length album following the near-simultaneous releases of Depression Cherry and Thank Your Lucky Stars back in 2015.  While both were decent LPs, they felt like a by-the-books, uncompromising blueprint of their style, with nothing to really come back to in the same way their previous releases were. It seemed like the band felt the same way, stating when they released their B-Sides and Rarities compilation back in 2016 they were “cleaning out the closet,” implying that they were planning on trying something new for their next release. This implication was only strengthened with the decision to hire Peter Kembler (aka Sonic Boom) as the producer for this new record.

When lead single “Lemon Glow” first released, I enjoyed the track, but I wasn’t completely sure on what to expect from the album itself. The song sounded quite a lot like their previous releases, but there was something that felt somewhat different as well, even though it was difficult to pinpoint what exactly. Hearing it in the context of the album, however, I felt like it was the best choice to release as lead single. It’s the track that sounds the closest to their previous releases, but it also gives the listener a taste for the more experimental direction the album takes, somewhat comparable to Nirvana’s decision to release “Heart-Shaped Box” as the lead single for their more abrasive In Utero. Overall, it’s a damn good dream-pop track, making great usage of Victoria Legrand’s whispery vocals and highlighting her tendency to find just the right keyboard textures to produce a blissful, floating-in-space vibe.

A lot of parts in this new album sound borderline shoegaze, with messier, static-ier synth and guitar textures. Sonic Boom, who’s best known as a member of space/drone rock progenitors Spacemen 3, likely had an influence in this. The opener, “Dark Spring”, is the most obvious example, which has who I believe to be guitarist Alex Scally taking up lead vocals that sound reminiscent of Neil Halstead of Slowdive. It also has a more pounding drum beat than one would typically expect from a Beach House track. “Pay No Mind” sounds like the mellower songs from Autolux’s releases, and the subtle, drowning buzz in the background is a nice touch. The intro to “Dive” has an organ riff of sustained notes that reminds me a bit The Radio Dept.’s “Strange Things Will Happen”, but it’s noticeably more distorted. The vibe of the intro reminds me of being a cathedral, the echos of the guitar strokes helping establish that image.

The album also takes directions I never expected Beach House to go. Some parts of 7 sound somewhat like elements of pop songs from the 80’s, such as “Girl of The Year,” reminding me of the more experimental, keyboard heavy tracks from The Cure’s Disintegration. “Drunk in LA” also has a guitar solo that sounds like it was influenced by 80’s pop. It’s unexpected, and although it should not work as well as it does, it is by far the most pleasant surprise of the album. It really needs to be heard to be believed.

The rest of the album is filled with nice touches as well. “Black Car,” my favorite track on the album, uses an adorable keyboard riff that brings to mind raindrops on a calm rainy day. “Lose Your Smile” is a beautiful but somewhat unusual-sounding ballad, reminding me a bit of what Wilco did with Yankee Hotel Foxtrot. “Last Ride” had a great piano riff that I felt emulated the Sinatra-era style of piano-playing, although I could be wrong on that front. The beautiful cacophony of synth and guitar fuzz at the end of the track makes for a hell of a closer for the album.

7 not only handles the delicate task of pushing the band’s sound while still sounding like a Beach House record, it gives some of their strongest material to date, making 7 a very strong contender for the best album of their discography.