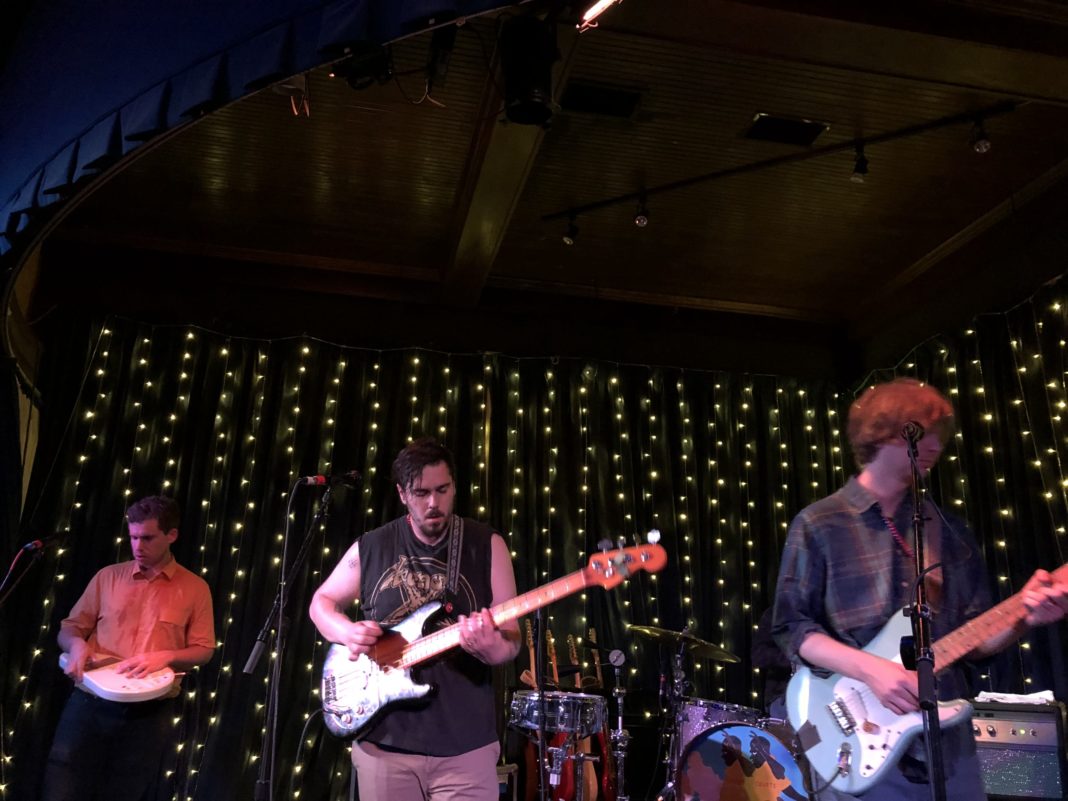 Deep Ellum sure isn’t what it used to be, indicated by the fact that I was waiting in a line of well over 50 people just to pay for some parking before the Parquet Courts show at Sons of Hermann Hall. My frustration, which only mounted as I tried to figure out how the hell to even get to the stage part of the venue, was quickly dissipated as I wandered in during Mind Spider’s set. The three-piece from Fort Worth recently released their album Furies, a concept album about the ancient Greek gods of vengeance, bringing forward a sound that Brooklyn Vegan lauded as “futuristic synth punk at its finest”. The energetic Texas-centric lineup calmed my momentary frustration from the parking situation as I remembered the good that can come out of the scene. After a few minutes had passed, a familiar gravelly tone came from the stage: “We’re Parquet Courts”, before jumping right into “Total Football”, the opening track from their upcoming album Wide Awake. The crowd took a bit to grow in excitement, a fact that did not go unnoticed by vocalist Andrew Savage. “Well, I guess Austin was right… I guess Houston was right. They all said everyone in Dallas would just be standing around, on their phones the whole night”, an astute observation that was met with apologetic groans from the crowd.

Kind and forgiving as ever, the band gave the audience an opportunity to redeem themselves by jumping forcefully into “Almost Had To Start A Fight / In And Out of Patience”, an extremely high energy track also from their Danger Mouse-produced album Wide Awake. The audience took this opportunity to erupt into a mosh pit, and the energy stayed just as frenetic for the rest of the set. Playing over half of the tracklist from the upcoming album, as well as a disparate mix of tracks from their extensive discography (including my personal favorite from Human Performance, “Dust”), it was clear the band was happy to be home. If an audience member wasn’t sure of the fact that the majority of the band had their roots in the Lone Star State, it was made very clear throughout the set, whether through jokes ragging on Ted Cruz or personal anecdotes from their time in the very place they were playing their show. “It’s good to see people walking around Deep Ellum again, the first club show I ever went to was here in Deep Ellum at the Galaxy Club”, Savage noted before dedicating the title track from Wide Awake to some good friends from the time, a couple of dudes named Mark and Phil. After some playful and funny banter, a plea to “vote for the state you want to live in”, and a set that was fantastic enough to turn any skeptics into fans, the band ended with an encore of “Red Jaguar” and “White Lead II,” leaving those of us as Sons of Hermann Hall happily walking out in a daze, grateful to be in the city we were in.