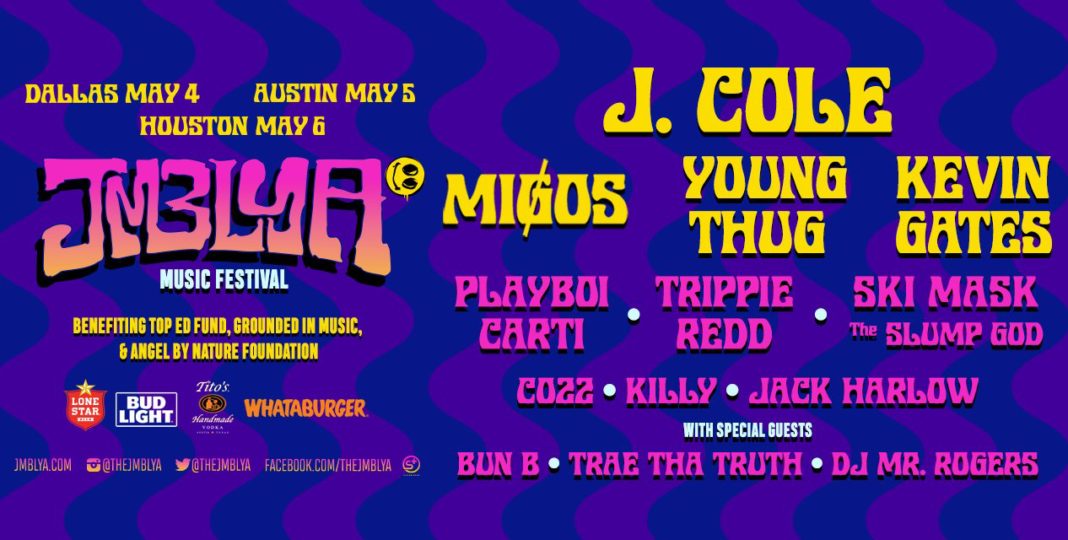 The sixth annual JMBLYA festival will take place in Fair Park on May 4th, and features a lineup with some of the biggest acts in hip-hop at the moment, as well as some up and comers that are quickly gaining a following. Migos will be returning again this year, as well as DJ Mr. Rogers, and special guests include Bun B and Trae Tha Truth. Here are some of the must see acts that will be there that you won’t want to miss.

Young Thug is one of the most unique artists in the scene right now. His extensive discography explores a variety of genres, such as the country influences on Beautiful Thugger Girls, which will lead to a diverse lineup. His latest EP, Hear No Evil, is only three songs, but each of them is completely different from the rest. They still retain Young Thug’s best characteristics, such as his iconic vocal style. The music video for “Anybody,” is a lyric video, but done entirely in sign language, he’s probably one of the first major artists to do something like that. He was just recently added to the lineup to fill Cardi B’s spot, who had to cancel her upcoming performances due to her pregnancy. Although Cardi B will be missed, Young Thug will not disappoint.

Another artist with a unique vocal style, Ski Mask will get the crowd bouncing. He’s very energetic and it shows in his music. Compared to a lot of the current wave of SoundCloud rappers, Ski Mask has managed to fill a niche with a style that differentiates him from the rest. Although he still uses a lot of trap beats, there’s an almost playful aspect to most of his songs, partially because of the samples, which range from Missy Elliot tracks, to SpongeBob. That’s not all though, the way he flows over the beats is yet another aspect that escalates him above the rest. He’s incredibly fast, but doesn’t just rapid-fire all his verses, there’s carefully timed pauses and clever wordplay that makes you want to listen to a song over and over again.

Yet another artist with a very particular voice that you either love or hate, Trippie Redd has a good mix of mellow, sullen songs, and a few more aggressive ones. He’s more of a sing-rapper, so the focus of his tracks is more on his singing than his flow. Compared to the rest of the lineup, his style is a bit more laid back, which will provide a much-needed breather at JMBLYA, but he can still definitely keep the energy going with tracks like “Dark Knight Dummo.” He’s still a pretty new artist, and has only started gaining popularity in the last year or so, meaning this is a chance to see him before he starts getting more known.

Playboi Carti’s debut self-titled album was an almost instant hit. He’s got the carefree “bubblegum trap” production, and although his rapping style is pretty laid back, his hooks are catchy and fun to sing along with. He’s also a really lively performer, interacting with the crowd and moving all throughout the stage, meaning he’ll definitely get the people going. Carti isn’t very active on social media, but has been working on an album since December of last year, so who knows, he might play some unreleased songs at JMBLYA. Regardless, it’ll be a really fun set that we look forward to.

JMBLYA will take place just a couple weeks after J. Cole’s latest release, KOD, and it’ll be one of his first times performing it, other than the secret shows he did to premier the album. On this project he takes a more upbeat approach compared to his previous release, 4 Your Eyez Only, which will translate to a really active performance, especially with tracks like “ATM” and the notorious “1985.” The album has already broken streaming records so the crowd likely be very familiar with the songs. J. Cole usually likes to perform albums from front to back, something which is pretty uncommon, but also manages to fit in older songs, which shouldn’t be difficult this time around since KOD is only 42 minutes long. This means we can probably expect to hear songs like “A Tale of 2 Citiez” and “Neighbors.” As the headliner, the bar is set high for J. Cole, but he will undoubtedly reach it, if not surpass it.