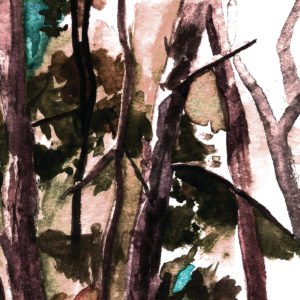 Hop Along is a group who seem to be discovering more and more about who they are the longer they make music. With each new album, the Philadelphia indie rock band build upon and expand their sound, while still keeping elements from their previous work intact. On their latest album, Bark Your Head Off, Dog, multiple new musical elements are introduced, but the group still stays true to their folk rock roots. Many of the tracks on the album implement new instrumentation with strings, harps, and even vocoders, but still feature the driving guitar riffs that are present during many of the bands best moments.

Many of the tracks off of the band’s previous album, Painted Shut, were solid, tightly contained songs that drove forward with guitars and the vocal power of lead singer Frances Quinlan’s unique voice. Each track on Dog however feels less like a bar fight and more like a wrestling match; they may pack less punch but they have much more movement and intent behind them. The lyrics on this latest album are not as direct as previous albums. On songs like “The Fox in Motion” and “How Simple,” Quinlan is clearly singing about herself with lyrics like “I was asleep with my mouth open the whole drive down.” But on many other songs on the album, there isn’t really a clear point of view. Each song contains the details of a story but the specifics are often left out, giving the audience the ability to interpret each song as they’d like while still feeling like each track has its own unique identity.

The biggest departure from the band’s previous albums is the instrumentation and musical direction for each song. “How Simple” is as close to pop as the band has gotten, with plucky guitars and an earworm of a chorus. “Not Abel” contains multiple acts, starting with folky strings and simple guitars and ending with Quinlan’s voice rising high and brash above pounding drums and a catchy base line. Songs like “The Fox in Motion,” “Somewhere a Judge,” and “One That Suits Me” don’t really feature a traditional chorus, but instead consist of small musical sections that string together and build upon each other to create a song that spans and has depth and character while still managing to be stuck in your head days later.

With all the new instrumentation and song structure, this album seems like it might fizzle apart at times if it weren’t for Quinlan’s one of a kind voice. Like the band’s music itself, Quinlan’s voice seems to evolve and stretch with each album. At times she’s screaming in the upper registers of her beautifully harsh vocal range, and at other times she’s almost whispering or blending in with a chorus of other voices. Even though these songs would still stand on their own with a different lead singer, its Quinlan’s passion and investment in these song’s stories that glue it all together to craft an album that feels fresh and different while still feeling like a true Hop Along album.