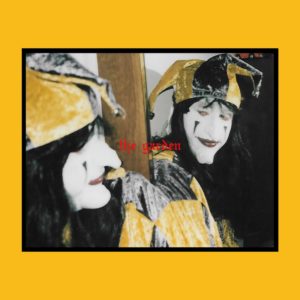 Orange County based duo The Garden have delivered onto the public their third full length album titled Mirror Might Steal Your Charm. Since the release of their last album titled haha in 2015, The Garden have dropped sporadic singles and an EP titled U Want the Scoop?. These singles show a progression in the band’s sound from solely a drum and bass duo to a sample and sound effect centered style. The songs became increasingly distinct due to the introduction of synth and keyboard sounds, and created an intense and eccentric sound that was very unique to the band. Mirror Might Steal Your Charm continues this trend of sample-based music, with a small amount of their original distorted bass and drums popping up throughout.

The album kicks off with “Stallion”, a track that is sure to please fans of the band’s older work. This time around, the crunchy bass and fast paced drumming are sharper and more organized than their earlier songs. The song also begins with guitar strumming, something that is somewhat foreign to older tracks from the band. The instantaneous double time changes in the song keep up with their general “experimental punk” demeanor while also packing the very short song with content and variety. The next two songs deliver instrumental melodies that coincide with the albums “court jester” theme (as is also heavily referenced by the albums cover art).

The first of the two, “Make a Wish”, features a monotone hook that repeats a second time with a bit more chutzpah than before. Besides this, the song doesn’t come forward with anything incredibly gripping. Most of the songs on this album have an added level of eccentricity in the words and instrumentation, but this track definitely lacks anything incredibly enticing. With only a small amount of variation and uninspired presentation, the song comes off a bit lackluster compared to the rest. The second of the two, “Shameless Shadow,” is quite the opposite. The song goes through multiple transitions and utilizes both the older and newer sounds of the band. The first minute is mostly quick horns, crunchy bass, and eccentric vocals (as could be expected of a typical track from The Garden). The song progresses to a segment where another melody that keeps up with the “court jester” appeal, and then finishes with a reverb-surrounded bell solo. All across the three minutes this song spans, it keeps the track dynamic and overall is one of the most fun tracks on the album.

The songs “Who Am I Going To Share All Of This Wine With?” and “Message To Myself” continue with the fast paced drumming and incredible energy we’ve come to expect from the band. The mostly positive message in the latter track is a nice moment on the album, but is really most of the takeaway from the song. While neither of these tracks bring anything incredibly distinct or stand out far above the rest of the album, they’re still very enjoyable tracks.

On the other hand, the track “:(“ is incredibly memorable. Utilizing most of the preset Yamaha keyboard sound effects throughout the first half if the track takes this song to an almost goofy level. There isn’t much substance to the song as its mainly sound effects and a fast paced punky outro with the words “stay lit” repeating over and over, but substance isn’t necessarily something fundamental to a track by The Garden.

The songs “Call The Dogs Out” and “Voodoo Luck” show off some softer singing, with hooks that sound like they belong on an album like blink-182’s Enema of the State. The first of the two tracks is definitely catchy but doesn’t offer up much more than a pop-punk sound with the bands typical instrumentation. The second track mostly consists of their usual drum and bass sound with a softly sung hook, however there isn’t much else that stands out about the song.

“Good News” and “Banana Peel” are two of the strongest tracks on the album. “Good News” is immediately in your face, with choppy and aggressive vocals over a piercing telephone ring beat. The song progresses to one of the most vulgar moments on the album, and the quick switches between a half-time beat and a double-time beat keep the song interesting. “Banana Peel” sounds as if it was sampling a song from a Donkey Kong game. With one of the most fun and fast paced grooves alongside quick and goofy vocals, this track comes forward as one of the most entertaining on the record. The swing filled beat of “Stylish Spit” is incredibly fun as well, and for some reason reminds me of “Mambo No. 5” by Lou Bega. The album finishes off with the piano based “No Destination.” This final track doesn’t carry the eccentricity one would hope for in a track from The Garden, but it definitely works as a closing song. If this was placed anywhere else on the album it would have seemed out of place, but as an introspective closing track about how it’s not the destination but rather the journey that matters, it finishes the album on a very upbeat note.

Although some tracks were less interesting than had been hoped for, The Garden embraces their “Vada Vada” style of not caring at all about limitations and making whatever sort of music they want to make. This freedom of expression works in the favor of most tracks, but not all songs are as lucky. Insightful lyrics aren’t necessarily to be expected of an album by The Garden, so the lack of powerful lines didn’t dissatisfy. The band’s unparalleled style shines through across the entire album, and will surely be a hit to those who are a fan of the bands progression in sound. Mirror Might Steal Your Charm challenges the listener to be entertained, and if successful, is sure to be one of the most fun album to listen to this year.